Junkfoxx are a three-piece rock band whose four-track Listen Up! EP sees vocal duties being shared between guitarist Nathan and bassist Julia. They describe their music as 'sassy' rock, which pretty much sums it up. In terms of style, Republica are the closest band that spring to mind, and Junkfoxx pull that '90s poppier-side-of-rock sound off rather well. Opening track 'Cold-hearted Bitch' is probably the strongest, 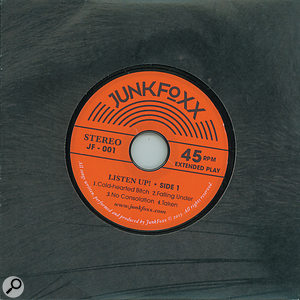 possessing all the attitude that a song of that name should possess, while the second and fourth songs carry on in a similar, no-nonsense rock & roll vein.

The token ballad that is track three, however, isn't quite so successful, possibly because it puts singer Julia out of her comfort zone — as far as I can tell, her voice is much happier when shouting naff lyrics over cheesy rock music than trying to do anything too adventurous or showy. And if that comes across as a backhanded compliment, it shouldn't: naff lyrics and cheesy rock music make up the bulk of my own record collection. Chris Korff

Rollercoaster is the rather odd work of Bristolian Ian Sinclair, aka Retrodog. The album's oddness owes much to some idiosyncratic production, and the rest to its bizarrely ecclectic range of influences and genres. His vocal style also seems to flit between Right Said Fred-ish poppy euphoria and Lou Reed-style deathbed delivery (rest his soul) — occasionally even switching from one to the other at a moment's notice. 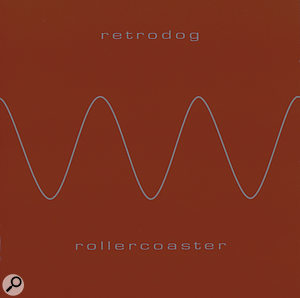 that would be confusing enough, but some of his mixing decisions are also downright baffling. The vocals are often completely drowned in some excessively distorted guitars, and the programmed drums seem to be swimming in cavernous reverb most of the time. Even more distracting is the drum kit's internal balance, which often creates the impression that the snare drum is roughly half a mile away while the hi-hat is being shot at with a pistol from close range

It's not all bad, though: there are some genuinely interesting 'breakdown'-type moments, and the acoustic instruments he has recorded — sax, 12-string guitar and trumpet — have all turned out very well. But, as with many of the demos we receive, the better the real instruments sound, the more the ear is drawn to the unfortunately programmed and balanced software elements. Chris Korff

Not many of the CDs we get sent for review come in the form of a jewel-case-sized hardbook, but so it is with Marcus Reeves' submission. Accompanying the CD (which sits in a pocket inside the back cover) is a collection of slightly creepy, though very good, cabaret-inspired photographic artwork — the cover should give you some idea of what's inside. It's all very theatrical and melodramatic, which is extremely appropriate because 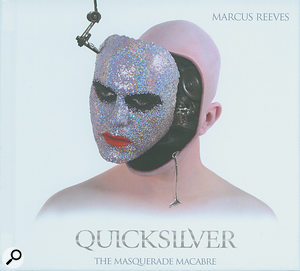 that's exactly how I'd describe the album.

Quicksilver seems to be an attempt to marry modern pop with vaudevillian cabaret, and it does so very successfully. There's a very obvious Bowie influence here, perhaps a little latter-day Faith No More, and even a nod to Balkan styles, but very little slavish copying, and the production has a very contemporary aesthetic that keeps things sounding fresh.

It's nothing if not over-the-top glam, but for a man who, vocally at least, styles himself as something of a cross between Bowie and a circus ringleader, you wouldn't expect anything less. The whole package, including the CD and the accompanying booklet, are very well put together indeed. Chris Korff

Melancholia is the name of the game here, it seems, and London-based trio My Youth do it extremely well. Almost too well, in fact, as their EP Dos (as in 'two' in Spanish) has left me feeling rather introspective and even a little forlorn. That it has done so is a testament to the 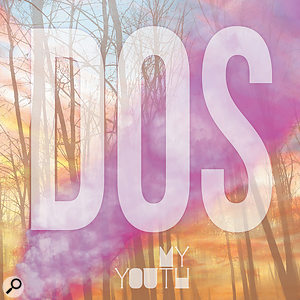 quality of the performances and production, both of which are pretty much flawless and do nothing to detract from the sentiments being conveyed.

The harmonies are effortless, the lyrics evocative and the instrumentation well judged and pleasantly understated — so there's really nothing I can fault here at all, but it would be nice if they cheered up a bit. Chris Korff

Pete Thomas & The Horns A Plenty

Like reggae, ska, heavy metal and house music, big band is one of those genres that a piece of music either is or it isn't — there's little room for deviation, and it's arguable that the genre hasn't really evolved much, if at all, since its heyday. Pete Thomas' Big is most definitely big-band music. Extremely well done big-band music, but big-band music nonetheless, and it's a genre I can't seem to enjoy for all the evocations of 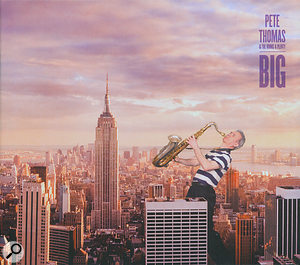 daytime television-show theme tunes. Indeed, opening track 'TCL' brought back some frighteningly vivid memories of such atrocities as Cash In The Attic, Homes Under The Hammer, Bargain Hunt and (cripes!) Trisha.

It's with sincere apologies to Pete Thomas that I make these comparisons, by the way. That I am somewhat scarred by an entire summer of waking up at 2pm, subsisting on Super Noodles and wearing jogging trousers exclusively until their untimely expiry is not his fault but mine, and in the interest of fairness I must note that the playing and the production on this album are brilliant. It's also clear that he's an outstanding saxophonist, as you'd expect from a musician with as impressive a list of credits as he has. What's more, the proceeds of the album are all going to some very worthy charities, so if you like big-band music but want to support a good cause, this album is for you. Chris Korff

Welcome to the new psychedelic revival! The third of the new century, by my reckoning. Disappointingly, the psychedelia being revived here is not that of the 13th Floor Elevators or the West Coast Pop Art Experimental Band, but that of the Coral. In fact it's even been released by a Liverpool indie label with a cool retro logo — rather like Deltasonic, who put out records by the Coral... 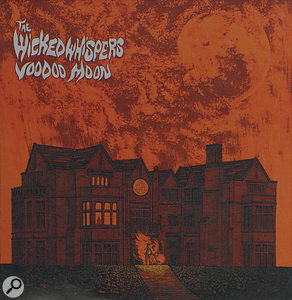 I'm not sure how this has found its way into the SOS demo pile; it's clearly a professional release, it was recorded at Toerag and is accompanied by a press release written by a PR man whose name I recognise. Surely this is cheating?

On the plus side, the CD features only two tracks, both under four minutes long. This is unprecedented brevity for SOS demos, where prog-rock concept albums lumber unashamedly across a blasted landscape like it was 1974.

Back to the new psych revival, though. Originally psychedelia was like nothing anyone had ever heard before and it must have seemed like it was being conjured out of thin air, which must have been tremendously exciting and really rather magical. Now, though, it's merely a genre like any other, beset with its own tropes and clichés. That doesn't mean that it's not worth trying to do it well, but the music here sticks doggedly to the sub-'Incense & Peppermints' Farfisa-pop formula laid down by the Coral, which seems a little tame — I mean it's not exactly gatecrashing the astral plane or dying in the attempt. Both tracks are well recorded, but Liam Watson is a clever man and knows exactly what he's doing, so that's hardly surprising. Perhaps the live version is 40 minutes of mind-mangling feedback with an extended organ wig out and staged shamanic blood ritual, but as it is 'Voodoo Moon' fails to live up to the promise of the singer's Roger McGuinn bowl-cut.

In my capacity as SOS's de facto Psychedelia Correspondent, my advice to the Wicked Whispers — and to you, the reader — is to go and listen to 'I Had An Excellent Dream' by the Dentists. That's how a psychedelic revival ought to sound. David Glasper

Fight From The Inside

According to the liner notes, Into The East used the PledgeMe web site to raise the cash necessary to record Fight From The Inside, and it's a good thing they did too, because it's a very enjoyable album indeed.

Most of the band are hired guns, with the singing and songwriting being the work of Liv McBride and Graeme Woller. 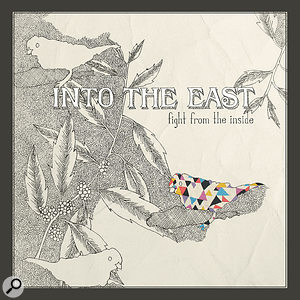 Their harmonies suit the country/rockabilly style extremely well, and their songs generally stop short of being twee, thanks to some genuinely good lyrics — too often, country styles rely on pretty harmonies to carry the songs while dusting off the same old lyrical clichés, but that isn't the case here at all. My personal favourites are the more up-tempo songs, but even the more mournful tracks are very good, and have the benefit of bringing Liv and Graeme's singing to the fore. Chris Korff

Adamrake is the obscure musical trading name of one Herbert Praxmarer. Behind the equally inexplicable photo of a mouldy tree that graces his CD sleeve, I was surprised to discover nine tracks of slick, soulful and occasionally sleazy AOR, which reminded me variously of acts like Squeeze and Robert Palmer. (There is a 10th track, but since it suggests an unintentionally parodic white reggae version of 'Walking On Sunshine', it's perhaps 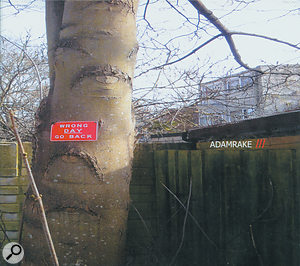 best I say no more about that one.)

Like many of the CDs occupying the Playback vaults, it's basically a home production with professional help drawn upon where needed. Thus StudioL2 in Innsbruck is credited with recording drums, while the whole thing has been mastered by Jon Astley. Both the playing and recording are consistently excellent, and the balances and use of effects are very slick. So much so, in fact, that I can only assume the murky overall tonality of some of the tracks, especially the opener, is a deliberate aesthetic choice and not the result of bass-light monitoring. Either way, it makes a pleasant change to hear something that errs on the side of rounded and smooth rather than harsh and spitty. Sam Inglis