Roger Nichols: Across The Board Skip to main content

Troubled with ground loops and mains hum? The answer is to switch to a balanced power supply.

Spike, noise, surge, swell, transients, harmonics and sag are not the names of members of a new alternative rock group. They are characteristic problems encountered in power management.

AC power is often the most overlooked area in recording studio design. If you were a farmer and your horse was your livelihood, you would probably pay attention to how well he was doing. AC power is the main source of your income, and also the primary cause of all the hums and buzzes you must deal with on a day-to-day basis. They say that if you build a better mousetrap, people will beat a path to your door. Well, just wait until you have the quietest studio in town and see how fast everyone wants to work there.

Power quality can be measured by recording the duration and magnitude of any disturbances. Faults that are short in duration, like transients, can damage sensitive electronic devices such as diodes, transistors and ICs. Lower-level transients slowly eat away at internal semiconductor junctions within electronic equipment, eventually causing failures. High-frequency noise can cause digital data errors in both digital audio and computer equipment, and can interfere with clock signals causing timing errors and excessive jitter. Voltage fluctuations affect motor operation and electronic equipment that requires a steady power source. 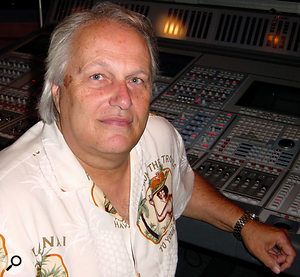 At the load centre, harmonic currents can cause circuit breakers to trip. Thermal magnetic breakers may trip prematurely from excess heat in the panel caused by harmonic currents. Breakers may also trip erratically when non-linear currents with high peak values are present. A peak-sensing circuit breaker responds to the peak of the current waveform. Since the peak may be higher due to harmonics, this type of breaker may also trip prematurely at a lower RMS current.

Excess heat caused by harmonics in a lighting circuit conduit can cause conductor insulation to fail. In energy-saving electronic ballasts with solid-state power supplies, the phase and neutral currents can contain harmonics. Existing standards for the number of conductors in a conduit don't always account for the heat caused by these harmonics. To find harmonic overloads in lighting circuits, you can measure the current in the feeder neutral. If the levels are high, compare the measured currents to the ratings of the conductor, lugs and buss bars. Feel the conduit for excess heat. To determine the overall level of harmonics, measure the total harmonic distortion in the phase currents. The THD generally refers to the RMS value of all the harmonic currents, divided by the fundamental. The total harmonic distortion may be a problem if it exceeds 20 percent.

To prevent harmonics from affecting a lighting load centre, specify fewer conductors per conduit. Or you can install new high-performance ballasts, which produce lower harmonic currents and also improve Power Factor (the ratio of 'active' power to 'apparent' power, which is an indicator of efficient power use).

Harmonics on the AC line are usually caused by non-linear electrical loads. Some of these non-linear loads are: personal computers, certain types of lighting ballasts, electronic studio and office equipment, and adjustable-speed motor drives. These devices draw non-sinusoidal current in abrupt pulses when connected to a sinusoidal voltage source. These pulses form a distorted current wave shape which contains harmonics.

Computers used in console automation or hard disk recording can crash or reset when there are excessive harmonic voltages in the supply power. Remember, the harmonics can come from devices anywhere on the same transformer or branch circuit.

As you can see from the above, AC power contains more than just that pure mythical 50 or 60 Hz sine wave that you read about in text books. In most cases, filters added to the power line add noise of their own. The capacitors in the filter circuit leak current into the ground system. This noise is usually in the form of a reactive, non-linear leading current. The same type of noise on the ground is caused by the switching power supplies found in most computers and digital audio gear. This ground noise usually shows up as hum in audio gear. Class-A tube amps and balanced mic pre amps are particularly susceptible to this ground noise.

Quiet grounding schemes in studios sometimes border on the occult. I asked one studio why they had a water cooler in the control room with no water in it. They said that for some reason, when the water cooler was plugged into the same branch circuit as the guitar amps, that there was less hum in the amps. I unplugged it once. They were right.

Grounding circuits were never meant to carry current except during a short circuit. Objectionable ground currents are those that will provide you with a shock. Anything less than that is OK as far as Underwriters Laboratories is concerned.

We have all experienced ground loops in the studio. The really bad ones, with hum levels above the signal level, we try to cure. The ever-present little hums that make the DAT meters stick one segment up from the bottom we try to ignore. We try breaking grounds in balanced cables at one end so that we do not have multiple ground paths for ground loops. We lift chassis grounds with special plugs and make sure that metal chassis do not touch each other. If we removed the currents from the ground, then we would have no current to loop.

Balanced Power To The Rescue

Why have I been telling you all of this stuff about AC power? Well, because the more you know, the better you will be able to cope with AC problems as they occur. Although I have covered many factors dealing with power, the easiest problem to control is the most objectionable in the studio: ground noise. The solution is balanced power.

Balanced power is delivered using the same three wires that are connected to most studio equipment. If you measure the voltage between the two feed wires, you get 240V. If you measure between either one of the feed wires and ground you will see 120V. 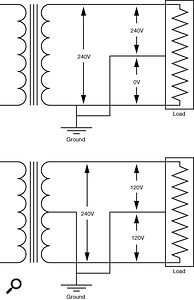 If we take any of the noise-generating equipment and connect it to the balanced power source, the noise generated in each leg of the power will be out of phase with the other at the ground. The ground will be quiet as a clam. Balanced power provides the same common-mode rejection we are all familiar with in balanced audio.

With balanced power, you can use any type of grounding configuration you wish. Star, schmar. You can leave the grounds connected at both ends of your audio cables. You can throw away all of your ground-lift adaptors. You can finally plug everything in the way it was meant to be plugged in.

There is not much you can review about balanced power systems, because there are no knobs, no meters, no adjustments of any kind. There is only a power switch on the front and some AC receptacles with circuit breakers on the back. To install a balanced power system, all you have to do is plug it in to an AC supply, throw away all of your ground-lifting plugs and plug all of your equipment in to the receptacles in the back, and turn the front-panel power switch on. That's it. Nothing will hum, nothing will buzz. Your studio will be the quietest thing you have ever heard, or not heard in this case.

I have been using balanced power for about 10 years. I have had fewer digital errors when transferring signals between equipment. Electrical AES and S/PDIF work as well as optical now. On the analogue side, my transformerless tube mic preamp is 15dB quieter. As an average, all analogue equipment has measured 12 to 16 dB quieter just because of the balanced power.

A few weeks ago I had to record some piano and vocal overdubs at a studio that does not use balanced power. On the piano I was using a pair of Sony C800-G microphones (the ones with the heat sink). On the vocal I was using an Audio-Technica 4060 tube mic. Under normal circumstances, the electrical noise floor at the studio left something to be desired. I was about to change all of that.

The difference was amazing! I could finally hear what fantastic microphones sound like. When referenced to a quiet ground, even the low-level noise that you usually associate with tube microphones was gone. I couldn't even tell if the microphones were turned on until someone walked into the overdub room. This is the way recording was meant to be. No matter what I plugged in, no matter how I interconnected the audio, I could not force a ground-related hum or buzz. This was always a problem in the past when someone wanted to bring in their own piece of audio gear to patch into the chain. Now I encourage it.

I expect every studio I work in from now on to be powered by balanced AC. The units come in various power-output configurations and multiple units can be run in parallel. This is by far the least expensive way to rocket your studio into the digital quiet age. Balanced power has been used in hospitals for 20 years to lower the noise in medical equipment and lessen the possibility of shock from poorly grounded equipment. It is way past time for every studio and project studio to embrace this technology.

Note: the voltages mentioned are appropriate for European studios — halve the numbers for US studios.

Note: There are some potentially very serious safety issues with the use of balanced mains supplies which are not made clear in this article. Please refer to the follow-up article.

From DX to MODX with Manny Fernandez | Podcast
4 days 31 min ago.