This month, Roger tackles some questions from his bulging virtual postbag... 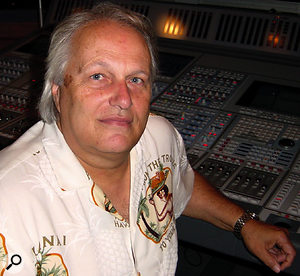 What is this new Boot Camp thing from Apple?
Everyone is talking about Apple's new Boot Camp software for the Intel Macs that allows you to boot native Windows XP. I tried it, and after about an hour, I moved all of my Windows programs over to XP on my Intel Mac and discarded my PC. Somehow, even Windows feels better running on a Mac. I guess it's just a perception thing. It feels better to drive 60 miles per hour in a Ferrari than a Hyundai. I installed Adobe Audition, Premier and Encore DVD, which all worked like a charm. The Plextools Professional XL program that I use for checking CDs and DVDs for errors worked perfectly as well.

Another big Web buzz asks whether companies that make programs for both Mac and PC will eventually drop the Mac versions. Adobe already did so years ago: I owned the Mac versions of Framemaker and Premier, which have been gone for a long time from the Mac catalogue.

With Apple's XCode development tools you can now compile an application that will run on either Power PC or Intel versions of the Mac. Apple insiders say that a goal is to be able to compile a version that will run natively on a PC. That would definitely cut down on the man-hours necessary to build multi-platform applications. The future is looking good.

If your DAW uses 32-bit internal data paths, it can transfer two chunks of data at a time, but this may or may not make things faster. It takes time to take those two 32-bit chunks, put them together, move them, and then take them apart again — in some cases, more time than just moving each 32-bit chunk by itself.

Before 64-bit computers and software, memory addresses were 32 bits in length, which limited the maximum amount of memory to four gigabytes. Hey, no problem for me — I remember when I was limited to 56 kilobytes, and I once bought a chunk of memory that cost twice as much as a new Corvette, but back then, that much money would only buy one megabyte. With 64-bit addressing, the memory limit is about 18 exabytes, which is 18 billion gigabytes. You would need a PC with four billion memory slots and a bank account bigger than Bill Gates's to buy that much memory. For now, computer manufacturers have set more realistic limits on physical memory. Apple G5s will address up to 16GB, while Linux can be compiled to support up to 64GB.

What this extra memory does for the audio-holic is to allow programs to be designed that will hold more audio data in memory, which lowers latency, or hold more samples and wave tables in memory for samplers. For those who wish to sample the high road, check out Windows XP Professional X64, which will require a 64-bit motherboard and CPU (Intel or AMD) as well as true 64-bit applications, or a Mac G5. The Intel Core Duo, as used in the new iMac, is only 32-bit, but the Intel 'Merom' chip is its pin-compatible 64-bit replacement, due later in 2006. Bring lots of money. 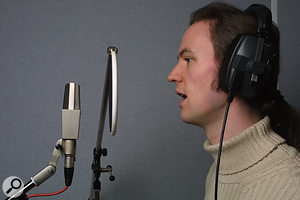 What mic is right for your singer? A good starting point is the mic that allows you to get closest to the sound you hear when you're in the room with them.Photo: Ashlee Nichols Which microphone should I buy to record vocals?

There is not one microphone that is the 'best' for anything, although any microphone can be used to record everything. Does that make sense? There is some basic knowledge that you can use to narrow down the choices for vocal recording. A condenser microphone would be a better choice as a starting point because of its sensitivity and wide frequency response.

Go into the room with the vocalist and listen to what the voice sounds like. For this test, ask the singer to stay in one position about four to six inches from the microphone. Now go into the control room and listen to the vocal through the recording chain and the speakers. What are the differences? Does the vocal sound thick and boomy or thin and crispy?

These differences between what you heard out in the room and in the control room could be caused by many things, but for this combination, the best remedy is to use some EQ to get the vocal sounding more like the actual singer. Now change microphones and listen to the vocal in the control room. The differences are not the same as with the previous microphone. Maybe you have to EQ more, or maybe you have to EQ less.

Experienced engineers make mental or written notes of the microphone, the room quality, and the sound of the actual singer. This time EQ is used to save the day. If one microphone sounded brighter than another, notes are made of these characteristics for future reference. Next time you record a vocal that sounds boomy you will know right away that it would sound better with the second microphone choice. There is no substitute for the actual experience of hearing the differences between pieces of gear. Other engineers can tell you their experiences with a particular microphone, but they can't tell you how that microphone would sound on your singer. 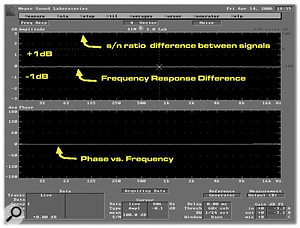 There is no difference in frequency response, signal-to-noise ratio or phase between a mix done in Pro Tools and the same mix done using an external analogue summing mixer. External resistive analogue summing buss: 64 individual outputs from Pro Tools, with all track faders at -12dB summed to mono. Pro Tools internal mixer: 64 tracks with track faders at -12dB, master fader at zero, all tracks mixed to mono.Photo: Ashlee Nichols I heard the mixing buss in Pro Tools is no good. Everyone says I should mix through an external analogue summing buss.

Someone asked Al Schmitt how he mixed a record. Al answered "I just turn the knobs until it sounds good." You can't argue with that.

The first thing I had to learn about audio engineering was signal flow. You have to know how to get the audio signal from the microphone to the recorder and back to the speakers so you can hear what you are doing. The second item is gain structure. At any point in the signal path you have to keep the signal higher than the noise floor but lower than the point of clipping and distortion. Everything else is going to be easy. Just twist the knobs.

Every console is designed to add signals together before they come out as finished mix. It is called a mix because the individual tracks are mixed together. I rather fancy the English term 'two-track reduction': it is being reduced from 24 tracks to two tracks.

Physical consoles usually have a stereo mix buss 'summing amp' for each group of eight modules. These summing amps then feed another summing amp connected to the master output module. During the mixing process the master fader is turned all the way up. As individual tracks are turned up their audio is heard through the master fader and the level is registered on the main output meters. As more and more audio channels are introduced to the mix, the overall master level starts getting high, so the master fader is turned down a little to compensate. This work flow proceeds in a loop until the mix is getting pretty far along.

At some point the engineer looks at the gain structure of the mix he has going on the console. He has learned that by running the individual faders high and pulling down the master fader he runs the risk of overdriving the summing amps with too much level and adding distortion to the final mix. The engineer will trim down all of the track faders by 6dB or some similar amount so that the master fader can be brought back up to zero.

This method has worked for decades to keep the audio quality as high as possible while remaining within the limits of the console's design, but for some reason engineers ignore this procedure when mixing inside a DAW (digital audio workstation). When asked why they don't perform this requisite task the answer is always "It's digital, you don't have to do that." All of the 78 track faders are up near zero and the master fader by now is down to -40dB. Soon the engineer starts to complain about how gritty and distorted digital sounds. 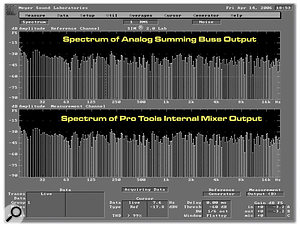 A 1/24th-octave spectrum display of two signals in Pro Tools. The top display is a summed mono signal from an analogue summing network; the bottom shows a mono output from the Pro Tools mixer for the same mix.Photo: Ashlee NicholsHow do they fix it? They connect the DAW to a console. At the console they either trim down the inputs or pull down the track faders to prevent the summing amps from clipping, and they make sure that the master fader is all the way up. "Hear how much better the mix sounds through a console?"

Sound familiar? I know all of you have run across this situation from one end or the other. The smart guys who saw this wanton disregard for gain structure quickly designed 'outboard analogue summing boxes', charged a lot of money (because it can't be good if it doesn't cost enough), and made a fortune. Good for them. Too bad I didn't think of it.

Because Pro Tools was the most visible professional DAW, Digidesign took the brunt of the criticism. "Man, I can't mix inside Pro Tools, their internal mixer sucks." Although there were tons of good-sounding records made and mixed in Pro Tools by engineers who knew how to turn down a fader, the majority of the forums on the Web hosted tons of complaints. "It shouldn't do that, it's digital."

Digidesign have updated their internal mixer to 48-bit. This means that you can mix 128 faders at +12dB with the master fader down to -90dB without overdriving the internal mixing buss. There will not be much room for a final fade, but at least Pro Tools is now being idiot-proofed. Me, I prefer to watch what I am doing and trim all of my faders down so that my master fader stays at zero. It has worked for me since the '60s and continues to work for me in whatever digital DAW I mix in.

Oh, and check out the in-the-box versus external buss measurement (left, above).

PS: Just so you know, I do tell my clients that "I only mix on dual 64-bit processors with a 48-bit mixer fed by 16 gigabytes of memory and an on-line RAID5 disk array of 8 terabytes and a 15 gigabit-per-second fibre-optic Internet connection. You do hear the difference, don't you?"