Sounding Off: A Tale Of Two Synthesizers Skip to main content

Sounding Off: A Tale Of Two Synthesizers

This month, we present a sobering tale of two synthesizers...

"While I was still suffering from acne and the scars of my first break-up, I built an analogue synthesizer. I had to buy the components when I could afford them but, as the weeks passed, the thing took shape. A mass of veroboard, trailing wires, and bits of cardboard proclaiming 'Mains. Danger!' in large letters, the underlying concept was quite good, so I set about designing what would become the prototype for the XXX-Synth. 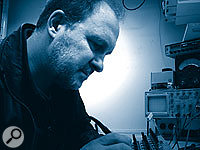 "This was a labour of love. I honed my metalworking skills by filing off cases with bits that protruded too far to be able to mount the boards, and by repositioning mounting posts that weren't in the right places. I even made a wiring loom, although the ends of the wires didn't reach everything they were supposed to. But eventually I was able to put the thing together and make it work. It hadn't a snowflake's chance in hell of passing the CE tests necessary to make it legal, it was almost impossible to calibrate, and it drifted out of tune at the drop of a snowflake but, surprisingly, it sounded quite good.

"The XXX-Synth proper appeared the following year. In essence, this was the same instrument, but with everything built the way that I had originally intended. It received some good reviews, but proved to be unreliable and was a pig to keep in tune. So I set about designing the Mk2.

"This was much better. I was able to afford better parts, eliminate a lot of point-to-point wiring, and my new Chief Engineer was able to reduce the board size by more than 30 percent by replacing discrete components with better-specified ICs. The resulting instrument was more stable, sounded better, and worked much better.

"Of course, your XXX-Synth is almost certainly a Mk4. After we improved the noise performance and added the balanced outputs on the Mk3, we felt that we had taken the specification as far as we could, and poured five years of acquired knowledge and experience into making the final XXX-Synths the best instruments they could possibly be. To be honest, I'm really proud of the Mk4s. They work almost faultlessly, and sound great."

"In my first year at college, I joined a band. I couldn't afford much gear, but I met a guy who was selling an XXX-Synth quite cheaply, so I snapped it up. At first, I loved it. It had a great sound and did everything I wanted. But, after a while, I fancied getting something with a bit more grunt. A mate of mine who knows about these things pointed out that my XXX-Synth was a Mk4, and told me that these were soulless compared with the earlier versions. So I sold mine, and managed to pick up a Mk3 for only a couple of hundred quid more.

"This seemed a bit better, and despite a few minor problems, I gigged with it throughout my second year until, by a stroke of luck, I saw a Mk2 advertised in the free ads. The resulting overdraft was crippling until I sold the Mk3, but who cares? The Mk2 sounded fantastic! Well, to be precise, it sounded fantastic when I could keep it in tune, and my guitarist was always complaining that he couldn't tell whether he needed to tune up or kick the synth. To be honest, things weren't going well, and when they announced that they had recruited a new keyboard player who used some piece of modern crap, I didn't really care any more.

"When I graduated and started work, I decided to treat myself to a new synth. Guess what...? As luck would have it, I was flicking through the adverts when I saw a Mk1 XXX-Synth for sale. Of course, it was ridiculously expensive, but I thought 'hey... you only live once', and bought it. I even found a buyer for my Mk2 shortly afterwards, a student from my old college, would you believe?

"Nowadays, I'm not in a band any more. My mates are touring the Far East with some girl-band, but they don't stay in touch any more. Truth is, they sound rubbish, and I wouldn't want to be involved in any of that pre-packaged digital rubbish anyway. I'm much happier tinkering with my XXX-Synth in my bedroom studio. Or, at least, I would be, but it's been in the repair shop for the past six months, and they don't know when it'll be fixed.

"You know... I've heard that the original prototype sounded absolutely fantastic! I wonder who has it, and how much they want for it?"

Gordon Reid has been playing synthesizers and poking around inside them for more than three decades. He reckons that most instruments have at least a 50/50 chance of survival if he approaches them with a soldering iron. If you would like to air your views in this column, please send your submissions to soundingoff@soundonsound.com or to the postal address listed in the front of the magazine.