Reel to real: the true impact of audio archival processing 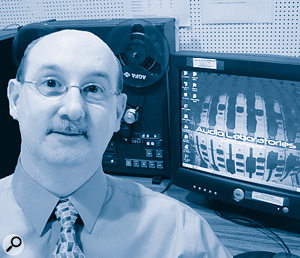 After 10 years of helping students to learn about digital audio recording tools, I sometimes wonder if I've become desensitised to the marvels of technology. Fortunately, an situation recently presented itself that allowed me to not only appreciate the tools, but also to realise how truly important the process can be.

A client approached me with a sealed package. Inside the 1967-postmarked box was a three-inch reel-to-reel tape. Their request was simple: can you transfer the contents of this tape onto a CD by this evening? Expecting an uneventful archival transfer, I agreed.

On the tape was a man's voice in what appeared to be an audio letter — a popular use for personal recorders in the '60s. I used an Otari MX50 reel–to-reel recorder and Adobe Audition. Once the transfer was complete I identified three processing necessities. First, there was a lot of tape hiss. Second, some of the dialogue wasn't loud enough, making it difficult to understand. This was to be expected with a personal recording. The third problem, however, was a bit more challenging. There was a noticeable pitch and speed discrepancy. The voice at the beginning of the tape was sped–up and very 'chipmunk–like'. It got progressively lower and slower, and in the end it sounded like it was in 'slow motion'. Having owned a small reel-to-reel recorder in the '60s, I was familiar with this common mechanical problem. The inexpensive battery–powered models often had very simple transport mechanisms that produced speed variations.

With the problems identified, I began processing (after creating a data backup, of course). First, I compared the pitch in the middle with the pitch at the beginning and end to calculate the speed variations. I then applied a progressive pitch and time shift to compensate. This restored the voice to its original consistency. I proceeded to remove most of the tape hiss with Audition's hiss-reduction option. Finally, I applied some compression, limiting and mild EQ to improve the clarity of the person's voice.

I normalised the recording and completed one last quality review before burning an audio CD. During the final playback I was very pleased that my digital arsenal had met the challenges I encountered — but then the client told me the story behind the tape. The recording was one of many that an airforce pilot made to stay in touch with his wife and young family while fighting in the Vietnam war. They sent tapes back and forth, taking advantage of the cutting-edge technologies of the time.

One day the wife was notified that her husband had been killed on a mission. His body was returned and a military funeral was held. A few days after the service, his grieving widow found a tape in her mailbox — the last message her husband created the day before his crash. Too distraught to deal with it, the woman gave the tape to a neighbour for safekeeping. The neighbour filed the tape away and later forgot about it.

It was now 40 years later and the mother of the children passed away. The children — now grown adults — arrived for the wake and funeral. The neighbour was reviewing keepsakes from her late friend and rediscovered the tape she was given. She asked a mutual friend if anything could be done with it, and it was at this point that I was contacted. Although the recording had seemed fairly mundane to me, I now realised the true significance of the archival transfer.

The client delivered the CD to the family the very next day. Emotions ran high as these adults were able to listen to the recording, and since they were infants when he died, this was the first time they had been able to hear their father's voice.

I was still pleased that my digital equipment was able to meet the challenges at hand, but I was also a bit embarrassed that I had underestimated the true value of this seemingly simple transfer. It was not the tools and technology, but the content that evoked such an emotional response. I've processed and archived many dialogue and music recordings prior to and since this experience. However, none have shown me the potential human impact of digital processing like the three–inch reel–to–reel tape I received that day.

Tim has been working with recorders and synthesizers for over 30 years. He currently teaches digital audio courses at the State University of New York at Plattsburgh.