Need Inspiration? It May Be Closer Than You Think... By Robin Bigwood

A few years ago I was contacted by a chap who wanted to get up to speed with his new sequencer platform, Digital Performer. So I went to his place expecting to meet a rookie. 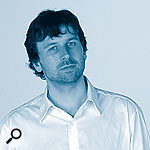 "Here's something I've been working on", he said, hitting the space bar on his G4 Powerbook. What came out of his system was a beautiful electronica-inspired dance track; easily as good as anything I've ever bought on CD. The MIDI and audio data was there on the screen in front of me, but I could barely understand how what looked like such a simple arrangement of material, could result in something that sounded so good. How had he come up with that? What was the key to its success? I couldn't get my head around it.

An hour later and the tuition session was over. We'd started discussing the pros and cons of different hardware synths, and I ended up playing around on his Korg Triton. "Oh wow! What were those chords? Can you do that again?" he exclaimed animatedly, as I knocked out what I thought were some fairly standard chord sequences. His eyes were suddenly glued to the keyboard, and I tried in vain to describe what I was doing by squeezing a comprehensive explanation of western classical and jazz harmony into 30 seconds flat.

On the way home I thought about what had just happened. As musicians, we were poles apart, but we'd both impressed the other by doing something that to each of us seemed pretty straightforward. Then it dawned on me: music is like magic. A good magician performs tricks that delight and dumbfound an audience in equal measure. But for the magician himself there's no magic at all. He knows the solution to every trick; the mechanics behind every prop; the punchline to every joke. A musical performance or recording has an even greater power to inspire, excite and confound, and yet, for the musician or recording engineer, it often seems like just another day's work. Unfortunately, we sometimes forget how miraculous what we're doing is.

I love that feeling of being pleasantly bewildered by a piece of music or a recording, simply because I'm not quite sure what's going on, or how the overall effect is being achieved. Similarly, I never cease to be amazed that others experience the same thing about one of my recordings or performances, since I find it very hard to think beyond the technical issues or what I perceive to be all the shortcomings. Getting too analytical about one's own work has the potential to become destructive. A classic example of this is the horrible feeling you get when you work on a track or a mix for too long. You hear it too many times, you get bored with it, objectivity goes out the window, and you end up thinking it's rubbish. I wonder how many potentially good tracks have faltered in this way, destined never to be finished. I know plenty of mine have.

So what's the moral of this story? I think there are a few, and the first one relates to objectivity. Don't underestimate your abilities, even if you think they're nothing special. To someone else they could seem extraordinary. If you're struggling with a track, try to get some distance, perhaps go away from it for a few days, hear it with fresh ears, and constantly remind yourself about the good aspects, not just the flaws.

The second is about discovery. It's healthy to experience things that make you think 'Damn! How did they do that?'. It inspires and stimulates the imagination. There's also pleasure to be had in painstakingly figuring out how different effects are achieved, and learning to do them yourself. This can be done by listening critically to commercial material, reading articles in SOS, or better still, by working with other musicians and producers.

Finally, there's the little matter of creativity. With today's typical computer-based recording setups, there can be a mountain of technical issues to climb before you get anywhere near being creative. It's easy, too, to believe that the technique and the gear is as important as the outcome. In actual fact, the outcome is the only thing that matters. It's true that we all need to keep learning, practising and improving, but it's meaningless unless we're actually achieving something. So, de-clutter your setup, forget the rules and make some tunes! Think about the end product at all times, and don't get too bogged-down in how you're achieving it. Like someone once said, no-one ever walked down the street whistling a mixing desk (let alone a dither algorithm)...

Being able to create material that means something to other people: now that 's magic!

Robin Bigwood has been Sound On Sound's resident Digital Performer expert since 2001. From a tender age he's been obsessed with computers, synths and recording, and is also a classically trained harpsichordist (just try Googling him!).