It is time that we developed a new series of universally recognised credits that better reflect the skill and effort required to create a modern album.

In the song ‘Moving The River’, Geordie troubadour Paddy McAloon (of Prefab Sprout fame) sings, “You’re only as good as the last great thing you did,” and there are few industries in which this aphorism is more true than in music production. Credits are where our reputation and further employment lies. That’s exactly the reason we have all taken on jobs for little or no pay to get our name on a cover. 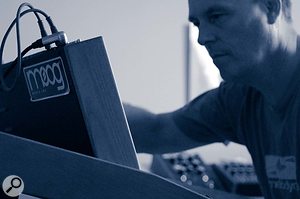 Even though the precise meaning of certain roles can depend upon the musical genre, there are some that are pretty well understood, such as producer, recording and mix engineer, composer and performer. Some of them even get recognised at awards ceremonies! These roles were formulated in the early days of music production, though — a field that has transformed beyond recognition over the last few decades. When looking at the work that goes into making an album, the traditional roles are just the tip of the iceberg. Most of the work, in fact, goes on uncredited.

Consider the production of a contemporary album. You may have overseen production, composed some of the music, played guitar and bass and been responsible for much of the recording. So far, so creditable. But you may also be ingesting content from talent from all over the world, editing and correcting their performances, replacing poor recordings with samples and fixing other sonic errors. You will probably have to clean up the recordings to remove extraneous noises and prepare several rough mixes for your co-conspirators to critique. You may have to de-instance all your effects plug-ins — making sure you supply any essential processing on separate rendered tracks — while any virtual instruments used will need bouncing to disk. Mixer levels and pan pots need to be zeroed before the separate tracks and/or stems are ready to upload for mixing. You must also make sure the file formats meet the mixing engineer’s requirements. Then, after you send the files, you may have to deal with ongoing technical problems and even provide extra last-minute content. Finally, you’ll prepare the masters for streaming, download, CD and possibly even vinyl release. How do we get credit for all this work, all those essential skills and all that time?

On the latest album I completed, my co-composer wouldn’t let me credit all the above for some reason, so we settled on ‘additional production, editing and file archiving by’ yours truly. I suspect that I’m not going to win any awards there.

I believe it is time that we developed a new series of universally recognised credits that better reflect the skill and effort required to create a modern album.

In 1981, Croatian-Austrian philosopher Ivan Illich coined the term ‘shadow work’ (in his book of the same name) to describe all the ‘hidden’ effort and time that we put in when we undertake any employment. I doubt this Roman Catholic priest was thinking of 21st-century music production when he completed his tome, but its central thesis is prescient. Perhaps ‘shadow work’ would be a suitable collective term for a synoptic credit. The problem is, of course, that not all of these processes are going to be undertaken by the same person on every album, but they are always going to be just as important as the more traditional roles. They certainly take more time to complete. Think, for example, of how often you’ll listen to a soloed track to pitch-correct errant vocals, remove plosives and other noise and generally make sure everything sounds as it should. It’s not a trivial process and requires great skill.

This is something that I think industry bodies such as the Performing Rights Society (PRS) and The Association of Professional Recording Services (APRS) should be addressing, but are not. Worse still, those who aren’t at the coalface of audio production — those with whom you are writing and recording songs — often appear not to understand the amount of work that goes into the creation of a contemporary production. The words “can you just tweak ” will instil fear and dread in even the most dedicated recordist.

Of course, it’s not only about the credit. Making a living in today’s media environment is hard and the more income streams you can generate, the more chance you have to make a go of it. But, if 90 percent of our skills and time go uncredited, and unpaid, how are we to be properly remunerated for all this ‘shadow work’?

Stephen Bennett is a freelance musician, composer, performer, film-maker, writer, coder, lecturer and undertaker of many more roles for which there are no universally accepted terms, credits or awards. stephenjamesbennett.co.uk