Sounding Off: The Tools We Use

Do the tools we use define the music we make?

I enjoy returning to Sound On Sound magazines from the ‘90s and early ‘00s to read the reviews, feature tracks, and the comment articles. From where we are now, it is fascinating to look back at how music technology has progressed. 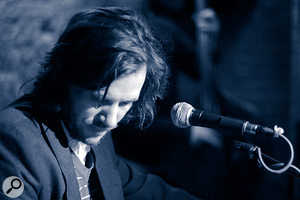 It was in the February 1999 issue that I stumbled upon Nicholas Rowland’s Sounding Off column, in which he refers to What Goes On — The Beatles Anomalies Page, “an elaborate catalogue of all the ‘fluffs’ in every recording the Beatles ever made”. The web site is actually still available (http://wgo.signal11.org.uk/wgo.htm) and is a genuinely interesting source of Beatles facts and ‘mistakes’. These mistakes largely remain in the Beatles remasters: tracks that we can access on iTunes and Spotify and that millions listen to each day. But who really cares about the so-called ‘mistakes’? I, for one, am glad that The Beatles made so much music rather than spending all their time working on just one album of perfectly edited, dehumanised recordings. Mistakes can be part of the magic of capturing a live performance, after all.

However, when looking at the output of more recent (specifically electronic) artists, performance mistakes aren’t something you often find. That’s not a criticism; I really enjoy and admire electronic music by artists such as Roni Size and Skrillex right through to Max Martin and Calvin Harris. I enjoy trying to write in these styles and learning crucial programming and mixing techniques. I love the way they use the entire frequency spectrum and also the interaction between the parts, both on a musical and technical level. It’s a different language from a ‘traditional’ band like The Beatles and a language that I (and indisputably millions of others) find exciting.

Needless to say, electronic music styles and production benefit hugely from modern recording technology, namely the prevalence of affordable recording software, but traditional bands and makers of instrumental styles also benefit just as much from the same technology. Some might argue that having these tools at our disposal can lead to the mechanisation and sterilisation of music and live performance. Having these tools at all means that we often reach straight for them, and therefore part of the magic of performance — and indeed the happy accidents that arise — can potentially be lost. I would concede that this is a danger, but this isn’t a result of the technology itself, rather it is down to the attitude and approach of the user.

For example, if I make a mistake while recording I will immediately record the part again. George Martin clearly did the same with the Beatles nine times out of 10 if they played a substandard take, the 26 rhythm section takes of ‘Oh Darling’ being just one example. Little were George Martin or the band to know that years later, on the occasions that they did make an edit, the eagle-eared listeners at The Beatles Anomalies Page would have a field day dissecting them and pointing the finger at the mistake maker. Had he known, maybe he would have gone for the ‘perfect’ take. I suspect he wouldn’t have.

The flexibility of software allows us to operate in exactly the same way that we would have done when using hardware, should we choose. The reverse cannot be said. DAWs give us so much choice in deciding how we work that our approach can vary from project to project. I will take a very different approach when composing for a corporate video than when working on a demo with a singer, for instance. We can use one or 100 percent of the functions of a piece of software, and we can use the software to help us generate ideas or simply to replicate a live performance.

I am certain that there is no right or wrong way to use a piece of technology, per se. There is a right or wrong way for what the music and musicians require, though, and this is worth thinking about before even sitting at a computer or picking up an instrument.

Richard Norris is a London-based musician working with singers, bands and the new Modulus String Quartet, developing the links between live performance and mixed media. Richard is always interested in collaboration. www.richardnorrismusic.com.