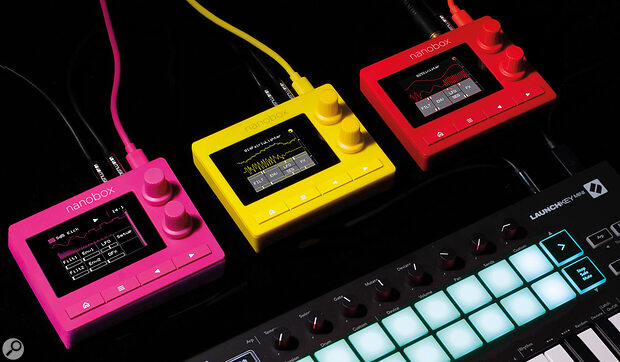 1010music’s diminutive Nanobox range has got it where it counts.

We’re living in an era of ‘kitchen‑table production’. Whether it’s iOS apps paired with OP‑1s or scaled‑down semi‑modular synths with multi‑effects pedals, many are favouring light‑on‑its‑feet gear under natural light over the analogue beasts lurking in dimly lit studios. It’s also much more Instagrammable, of course — add a plant to the former, arrange everything geometrically and take a top‑down photograph, and let the likes roll in! I’m being facetious, of course. But it’s true that DAWless music making has never looked sleeker, with new workflows being opened up at an astonishing rate. It’s therefore down to developers of desktop gear to keep up by releasing designs that still feel fresh and relevant; powerful and limited in all the right ways so as not to simply end up resembling a less functional iPad.

1010music are one company riding the wave in style. Purveyors of compact, powerful desktop units (as well as Eurorack modules), their products fit perfectly into the kitchen‑table paradigm: they’re multifunctional, nicely designed, well built, they have touchscreens and my goodness do they sound good. After the success of the Blackbox sampler and Bluebox digital recorder and mixer, 1010music have now launched the Nanobox range to branch into standalone synthesis, where the competition is stiff and the marketplace is, at least for one of them, crowded. Will the formula continue to deliver?

The Fireball, Lemondrop and Razzmatazz are three compact digital noise boxes, each not much bigger than a deck of cards. A wavetable synth, granular synth and sampling drum sequencer respectively, the Fireball and Lemondrop present their various engines within near‑identical architecture, while the Razzmatazz departs somewhat to serve its noise generation, sampling and sequencing capabilities. Their bright red, yellow and purple finishes, as well as their candy‑inspired names, denote a playfulness that on first impression works very well and doesn’t overpromise. 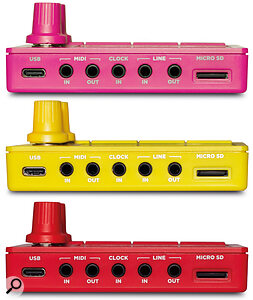 All the Nanoboxes share the same back‑panel connections: a USB‑C port, 3.5mm sockets for MIDI I/O, clock in and audio I/O, and a micro SD slot.

The three units’ interfaces are based around a touchscreen, with two encoders on the right and a row of four physical buttons along the bottom. All three deliver an impressively in‑depth GUI in a very small space, with easy access to a range of information about any active preset, stored on a micro SD card inserted into the back panel. The rear of all three also presents a USB‑C port, TRS line in and out, MIDI in and out and an analogue clock input.

The home screens of the Fireball and Lemondrop present visual readouts of the two currently selected wavetables or audio samples, and a compact dashboard display with moving metres to represent the behaviour of filtering, enveloping, modulation and effects. A moving indicator on the top right of the screen shows the clock tempo (though not its bpm), while the position of the X and Y modulators, which I’ll come to shortly, are shown down the right hand side. The Razzmatazz, meanwhile, defaults to a simple, playable grid display of its eight audio tracks and their selected sounds, with readouts for effects, panning, mix and more all a button‑push away.

From here it’s a case of using the touchscreen or the buttons to navigate around the Nanoboxes. The buttons’ assignments did take some getting used to, and even then they could be confusing at points; broadly speaking the arrow buttons move through levels of detail for currently selected functions, the Home button accesses the home screen and the Layer button cycles between layers in any feature set — different envelopes in the envelope section, for example, or different effects in the effects section. Despite the fact that most of what you need is generally one or two button pushes away, more than a few times I found myself reaching my destination only after at least one wrong instinctive guess at which button would get me there — usually hitting an arrow button instead of the Layer button.