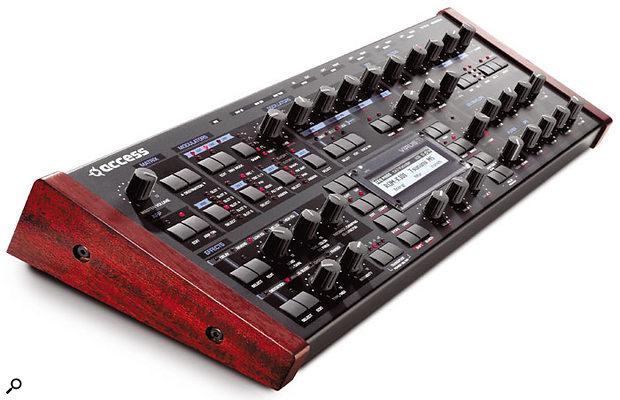 It's back! And it's deadlier than ever! SOS get a first look at the next-generation Virus...

The timing couldn't have been better. Paul White's Leader column last month called on hi-tech musical instrument manufacturers to work on hardware that integrates better with software. No sooner had we read that than we received a phone call from Access enquiring whether we'd like to take a look at some of their new hardware which, well, integrates better with software.

All pure coincidence, of course — or is it? In fact, this is a way of working that several manufacturers of hi-tech musical gear are exploring at the moment. If there could be said to be a trend in the industry at present, it's that there's currently something of a reaction to an idea that, broadly speaking, dominated from around 1999 to 2003. The wisdom was that all technology-orientated music-making could be, and indeed, was best done inside a computer, from sound generation to mixing and mastering. At around the turn of the Millennium, computers reached speeds where they could support software-based sound generation (virtual instruments) instead of merely managing sounds generated by external hardware. Many hi-tech musicians then began to ask themselves whether they needed to bother with this expensive hardware stuff at all, apart from a few bits and pieces like A-D converters and microphones for those troublesome analogue sound sources such as the human voice, which hadn't yet worked out how to evolve compatibility with the VST instrument specification. Whole companies, such as IK Multimedia and Native Instruments, sprang up to create software which took advantage of the new way of working. Musicians everywhere consigned their old-hat 'real' gear to the skip of history, sales of hardware slumped, and a number of companies dependent on the old ways of working wobbled (Akai) or fell over completely (Waldorf). Much of the hi-tech musical instrument industry, already close to computer manufacturers, got even cosier (like Apple and Emagic's amazing trick — where did the music software company go?).

Of course, this carelessly selective overview only conveys one side of the story. Not everyone likes mixing 40 tracks of music with a mouse. Some people actually prefer the sound of analogue instruments (and not just ones with lots of knobs on — acoustic guitars and yes, even that human voice thingy can sound pretty good sometimes, too). And, more prosaically, manufacturers and retailers, the underlying structure of the musical instrument industry, have found that software doesn't offer anything like the margin that hardware does, and is harder to sell and support — if you can sell it at all, that is. A lot of money that would have been appearing on the positive side of hi-tech musical instrument manufacturers and retailers' balance sheets a few years ago seems latterly to have been spent instead on laptops, cheap keyboard controllers and broadband connections to Kazaa. And so, as usually happens with any kind of revolution, the pendulum has started to swing back towards the centre, and the movers and shakers of the industry have begun to investigate ways of taking the best parts of the computer-based way of working, and the best aspects of hardware-based systems, and making them work together in a form that they can sell to make a decent profit. Yamaha, for example, have been exploring this with their 01X-based mLAN systems, and also more recently in the form of their Studio Connections initiative with Steinberg, both of which aim to create systems comprising hardware integrated with and completely controllable from software. They call this concept 'total integration'.

All of which brings me to Access' new Virus range, which also flags itself as a 'totally integrated' set of products (hence 'TI' — although Access's efforts are nothing to do with Yamaha's separate initiatives). As with the Virus C range, three different versions will be available: the standard desktop or rackmountable model, a 61-note keyboard version with the same controls as the module, and Pølar (below), a striking white 37-key model which replaces the Virus Indigo but which contains the same synth engine as the others.

The TI-series replacement for the Virus Indigo, the stunning Pølar.

This isn't just a Virus C with some extra computer interfacing built in, though; it's a completely new hardware synth with plenty of features beyond those concerned with computer integration. But more on that side of things in a moment. How exactly does a hardware synth 'totally integrate' itself with your computer?

Essentially, the Virus TI extends the concept of the version of the Virus which Access created for TC's Powercore DSP engine. A VST/Audio Units plug-in, Virus Remote, is included in the package; this runs under your sequencer of choice, and provides a completely computer-controllable and automatable front end for the hardware synth. But whereas the Virus plug-in for the Powercore did all the sound generation using TC's Powercore chips, in a Virus TI system, the sound is generated by the hardware synth. Communication between Virus Remote and the hardware Virus TI synth takes place via a USB 1.1 connection, and all changes made to the plug-in will be reflected in the settings of the hardware, and vice versa. Thanks to the USB connection, the audio I/O on the hardware synth will also be switchable to convert and route audio into and out of your computer system. And of course, the MIDI sockets on the Virus will act as a one-in, one-out MIDI interface for your sequencer. Naturally, this means the physical knobs on the Virus will also be useable as hardware MIDI controllers for computer-based instruments.

At least, that's the theory. At the time of writing (mid-October), not all of the TI aspects of the new Virus have been finalised. At the moment, for example, it's not clear whether you might be able to mix and match these capabilities in the final release version, using the synth's audio I/O in the standard way (rather than as an audio interface) while simultaneously controlling software via the USB connection, for example. If this turns out not to be the case, selecting the Virus TI as your MIDI interface or control surface may also commit you to using it as your audio I/O, although Access say that the synth's main outputs will remain hardwired to traditional duties even if the others are being used to send audio to and from your sequencer.

Beyond the features relating to the TI concept, the new Virus has undergone many changes in comparison to the Virus C; some cosmetic, others internal but highly significant, and others in the synth engine itself. There's even a completely new manual. The front panel has been reorganised, adding a larger, more user-friendly 128x32-pixel display, handy extras like the dedicated tempo LEDs for each of the three LFOs, and more dedicated knobs (such as the new one for the Tap Tempo function, and the three Quick Edit controls for altering parameters on the display). Further contributing to the light show is the rear-panel illuminated Access logo, which will eventually be capable of blinking in sync with MIDI or internal clock rates.

Round the back, the I/O is now on balanced +4dBu jacks, with 24-bit A-D converters, and stereo digital I/O via S/PDIF (at 44.1 or 48kHz) has been added. The circuit board for the inputs and outputs on the desktop version is separate from the main board, and can be rotated, Mackie-mixer-style, to provide connections on either the rear panel, for desktop work, or on the underside for when the Virus is rackmounted upright. Inside the synth, there are now two main DSPs, the main effect of which has been to increase total polyphony. Although this varies depending on what's active at any one time, Access are now claiming 'average' counts of over 80 stereo voices.

Aside from physical changes, the architecture of the new Virus's synth engine is very different, too. There's twice the memory capacity of the older Viruses, so Access have included 2048 ROM sounds and 512 RAM sounds. The beefed-up DSPs have also allowed them to offer delay and reverb on a truly multitimbral basis (ie. with one instance of either or both per synth part). What's more, the 16-part Multi mode memories can now be separate from the single sounds if you wish — so editing the patch data for one of the parts in a Multi no longer overwrites that preset in single mode, and vice versa. If this doesn't take your fancy, however, you can still work with the new Sequencer mode, which behaves in the same way as the old Multi mode did, with single sounds sharing their memories with the multitimbral parts.

The built-in arpeggiator is now user-programmable, and the modulation matrix has been extended and simplified; there are now six slots, all offering one source and three destinations, replacing the differently endowed slots on previous Viruses. But perhaps the greatest additions to the synth engine are in the oscillator section. The collapse of Waldorf has had one benefit — Access have been able to use some of the former company's expertise to create a working wavetable synthesis implementation, although details are sketchy at present. Last but not least, there are the Hypersaw oscillators, which offer something similar to the 'Doublesaw' wave generators on Novation's synths, or the seven-oscillator 'Supersaw' on Roland's JP8000 — except that Access's new implementation offers up to nine parallel sawtooth oscillators per voice (plus nine sub-oscillators per voice, apparently), all detuneable with respect to each other. Apparently, the number of oscillators can even be changed smoothly in real time while playing.

The Virus TI is an excellent concept and a brave step for Access; it has enough new features to appeal to fans of hardware while probably also offering enough in the way of integrated workflow and great sounds to appeal to computer-oriented musicians. Exactly how well it will appeal to the latter market, though, will depend on the precise nature of the connectivity between the hardware and the software in the final version, and the flexibility of this link.

Although such important details still had to be tied down as SOS was going to press, Access hope to have the Virus TI series out by the end of the year. International pricing has yet to be fixed, but a UK-based source close to the company thinks that they'll be able to bring it to market for less than 10 percent more than the existing Virus C models. We'll bring you a full review in SOS as soon as we can get our hands on them.