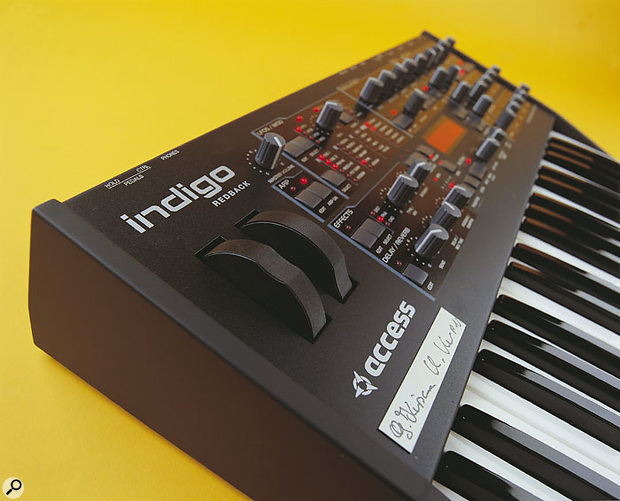 This limited edition collectable synth comes complete with the advantages of new features in the latest Virus OS — and these features can also be added to previous Virus synths via a free update.

It may sound like a venomous antipodean arachnid, and you may even find mention of it on the web (groan...) but this particular Redback is in fact a limited edition version of Access' Indigo 2 virtual analogue s ynthesizer. The differences between the Redback and regular Indigo 2 are purely cosmetic, with the additional 'collectibility factor' that every Redback sports the signatures of its creators, Guido Kirsch and Christoph Kemper. Instead of the standard Indigo silver body/blue lights colour scheme, the Redback is decorated in the same vampiric black livery and red illuminations as the Virus-C. Curiously, the back of the instrument is not red but black — however, the name does not refer to the rear panel. Look carefully around the Tempo LED, and if you get the angle of light just right, you will see a glossy black spider printed on the matt black panel. The red LED is on the back of the spider's abdomen — hence the arachnid moniker.

The release of the Redback also heralds the latest OS update, OS 6.0, for the Virus range of synths. The Virus operating system was last reviewed with the Virus-C, at which point it had reached version 5.0. (If you're not familiar with the family history of either the Virus OS or the Indigo series, I suggest reading the relevant reviews for the story so far; see the 'Recommended Reading' box for a list.)

OS 6 is compatible with the Virus C, KC, Indigo2 and rack XL. The Redback ships with the new operating system pre-installed (although the review model did not), as should all new purchases of the other models. If your C-series Virus has an earlier version, there's no need to feel left out, as OS 6 is a free 660Kb (zipped) download from the Access website. (www.access-music.de). OS 6 introduces three new enhancements, two of which are improvements to existing functions. The third is completely new and, as far as I am aware, unique to the Virus-C family of synths. The three enhancements are:

The original 40 arpeggiator patterns have been augmented by 24 new ones. These offer a variety of 16th-note and syncopated sequencer-style patterns, apparently designed to complement each other when two or more are running in parallel in a multi-part arrangement. The patterns' dynamics information (note velocity and gate time) includes judiciously placed notes of extremely short duration which help to accentuate the syncopation and add to the 'groove factor'.

Due to the numerous parameters of the Virus, and its limited panel space, many parameters are accessible only via the edit menus, and OS 6 provides control-panel shortcuts to a number of these otherwise menu-bound features. A selection of panel knobs now have alternative functions that can be accessed by using any one of the seven Edit buttons as 'shift' buttons. It doesn't matter which Edit button you use for this — the result is the same. For example, to access the 'Filter Envelope Time' parameter, press and hold any Edit button, then twiddle the filter envelope Sustain knob.

This additional accessibility is helpful, although the ergonomics of certain button/knob combinations make playing the keyboard whilst adjusting rather awkward, and reminiscent of Waddington's 'Twister' game — an extra hand would be useful! You will need to consult and become familiar with the list of available shortcuts (see 'Control Panel Shortcuts' box), as there is no screening on the panel itself of the available shortcuts. I would have liked to see the facility to assign personal custom shortcuts — I feel there are many Effect parameters that would benefit from more immediate access, for example. Nevertheless, the choices on offer are undoubtedly useful.

Pure Tuning addresses the subject of polyphonic pitch intonation, and is the most significant enhancement in OS 6. Equal temperament tuning has been in common usage since the late 18th century, and was adopted to enable polyphonic instruments, most notably keyboards, to be played in any key without having to retune the instrument. Prior to this, instruments were specially tuned (and still are by those striving for period authenticity) to achieve the 'purest' intonation for a particular piece of music, depending on its key. However, if the notes of one specific chord are perfectly tuned (ie. there is no beating between the notes), that purity of tuning is lost when you stray away from the root key. You can just about get away with subdominant and dominant chords, but add a few accidentals and things start to sound pretty awful. This is because the frequency ratio between every semitone will not be consistent. So although a keyboard perfectly tuned for C-major will sound 'sweet' in that key, the frequency ratio between the tonic, third and fifth of an F-sharp major chord will be out of kilter: they will beat excessively and sound out of tune.

Equal temperament circumvents this problem by adopting a compromise. Essentially, if the frequency ratio of an octave interval is exactly 2:1 (in other words, any given note is exactly twice the frequency of the octave below it), and if the frequency ratio of all 12 semitones in between is constant, then chords in any key should sound equally good — or equally bad, depending on your cultural upbringing! That constant frequency ratio, incidentally, is 1:1.059463. However, as one who failed maths 'O' level three times, I really must refer you to the 'Addendum VC OS 6' PDF file that accompanies the OS 6 download for a full explanation of the mathematics!

The equal temperament system has served Western ears well for many years, so why should we want to improve it? The answer to that is simple enough: it's because now we can. The Virus' Pure Tuning algorithm analyses any chord being played and instantly adjusts the notes' relative tuning to produce a 'perfectly' intoned chord. On a traditional instrument this would be rather like having Superman adjusting the tuning of every individual note at super-speed as you play — best keep that green Kryptonite out of the way! The software even attempts to take into account the context of each note. For example, C-major and A-minor have two notes ('C' and 'E') in common, but in the 'C' chord they are root and third, while in the A-minor chord they are minor third and fifth — so the frequency ratios of those notes would need to be different for each of these chords.

Pure Tuning offers 128 degrees of variation, from equal temperament at one extreme to fully pure tuning at the other. I personally found the fully pure setting to be rather stark in nature, and the in-between settings seemed rather more musical to my ears. I also discovered that the order in which notes are introduced can affect the way tuning is resolved. For example, play a G-minor triad ('G', 'B-flat', 'D') then move the 'G' down to an 'F' while continuing to sound the 'B-flat' and 'D', making the chord more like a G-minor seventh. Now release that chord and play the same notes again — 'F', 'B-flat' and 'D'. This time, the Virus interprets it as a second-inversion B-flat major chord, and the tuning is markedly different — much purer. This would suggest that, given the right clues and a fair wind, the Virus can tell the difference between a root major and its relative minor seventh by context. Clever stuff indeed! The only catch is that it doesn't always make the right decision if you are playing one-handed chords without the root at the bottom. That would require the Virus to be a clairvoyant telepath.

Applied to heavily modulated, processed sounds such as chorused pads with lots of delay or reverb, it's well-nigh impossible to hear the effect of Pure Tuning at any setting. However, the differences are blindingly obvious with sounds that employ little in the way of pitch modulation or oscillator detuning, such as electric pianos. Pure Tuning really comes into its own when playing distorted or overdriven chords. Normally, you would avoid playing full chords (especially minors) when using distortion, because of the excessive grunge produced by all those mathematically dysfunctional frequencies flying around. However, turn Pure Tuning up to maximum, and it's possible to play a wide range of distorted chords, even high up the keyboard, that would be a complete grungy mess using equal temperament. Minor chords and distortion remain unhappy bedfellows regardless of tuning purity ’Äî although reducing such a chord to just two notes does clean things up considerably. One last point: Pure Tuning is a global parameter in the system menu, and is not programmable per patch. What a shame! 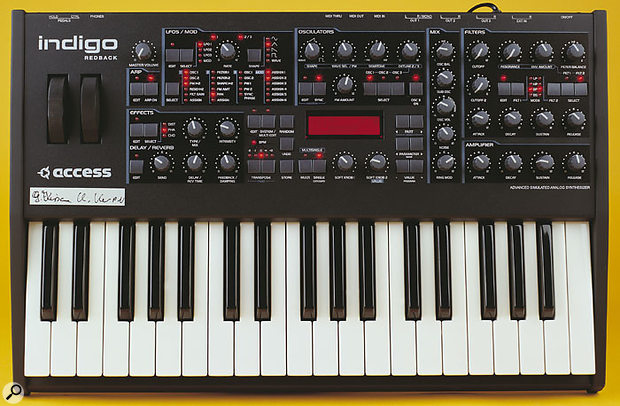 The Redback offers the same functionality as a regular silver Virus Indigo 2 (running the new V6 OS). What sets it apart is that striking red and black colour scheme and signature nameplate.Photo: Mike Cameron

All new Virus models come with free SoundDiver Virus combined editor/librarian software for Windows and Mac OS. The Redback is available in 'a limited quantity for a limited time', and amazingly at no extra cost over the standard Indigo 2. So if this sexy-looking signature model floats your boat (and why not?) you'd better get your skates on to avoid disappointment. For all I know, they might be sold out by the time this review goes to press!

Recommended Reading: The Virus in SOS

The Virus-C series software continues to evolve and improve. The Redback itself may well be a marketing gimmick, but it's a fun one all the same.