ADK's take on the classic Neumann M49 may lack the original's valve circuitry, but the desirable vintage character is all there.

Recording engineer Larry Villella is something of a microphone aficionado. He founded ADK Microphones in 1997 to manufacture his own range of mics with the aim of replicating the much‑admired character of sound associated with the classic vintage European mics, but at prices within the reach of project studios and musicians. Villella's intention wasn't to make something 'almost as good', but to create mics that were better, combining the desirable sonics with greater versatility, everyday practicality, usability and affordability.

ADK currently maintain two distinct microphone product lines: the Audiophile series, and the Custom Shop range. The latter is described as "top‑tier, performance‑upgraded mics, re‑manufactured in America,” and among the numerous Custom Shop models on offer is an interesting family of five related microphones called the T‑FETs.

This might sound like the start of a bad joke, but an American, a Belgian and an Australian... spent three and a half years developing this T‑FET range of large‑diaphragm, side‑address mics. They all share the same underlying technology, which centres around a unique FET impedance‑converter circuit cleverly designed to saturate gradually and gracefully rather than just clip nastily, as so many FET mics do when stressed.

Each of the five microphones in the T‑FET range is voiced differently, and entirely by means of different capsule designs. These different capsules are voiced to pay sonic homage to various well‑known classic European vintage mics, identified by not‑so‑subtle clues in their model numbers, as well as their geographical names, which reflect the region associated with each original model's fame. The T‑FET family currently comprises the red‑bodied Vienna 12T, the blue Hamburg 67T, the grey Berlin 47T, the cream Cremona 251T, and the subject of this review, the black Frankfurt 49T, which is the latest family addition (see box).

Interestingly, ADK take a very different approach in their capsule‑manufacturing ethos. Rather than try to build precise replicas of classic vintage capsules, as many boutique manufacturers try to do, ADK build capsules that are designed and voiced to sound not like a specific capsule, but like a specific microphone. This is a small but critically important distinction!

The sound of a microphone is created by the interaction of its many parts: the capsule itself, the acoustics of the head‑grille, the type of electronics and the circuit topology, and the output transformer, just to name the most obvious elements. Clearly, then, the capsule alone doesn't define the sound, and that is apparent if you consider that the same Neumann K47/K49 capsule is employed in the U47, U47 FET, M49, M149 Tube and M147 Tube — and yet these mics all have completely different sonic characteristics. 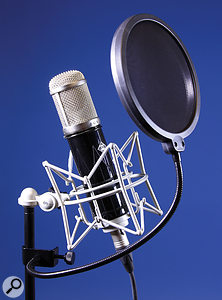 ADK's unusual approach voices each capsule design uniquely to create a workable impression of a specific mic, not just its capsule, while the electronics and mechanical elements that are common across the whole range just provide the practical means of accessing that sound, rather than shaping it.

The impedance‑converter circuit, which is the same for all T‑FET models, is based around a BF245A J‑FET, and the ultra‑high‑impedance sections of the circuitry are protected from humidity by a layer of silicon sealant. The electronics are accommodated on two high‑quality printed circuit boards mounted either side of a sturdy metal frame, which supports the capsule and grille at one end and the output XLR connector at the other. Wima capacitors and low‑tolerance conventional‑sized resistors are evident throughout, with two further general‑purpose transistors (an A1015 PNP and C1815 NPN) completing the active electronics. The output is dispatched via a compact OEP transformer, which ADK describe as a 'British‑Oxford' unit. The quality of the whole construction is impressive, and the mic feels sturdy and very well built.

As the T‑FET family members all share the same electronics, they feature the same operational facilities too. Three recessed toggle switches are mounted just below the grille; the front switch selects the polar pattern (omni, cardioid or figure‑of‑eight), while the two switches at the back engage a high‑pass filter (6dB/octave at 100Hz, 160Hz, or off) to manage proximity effect, and a pad (off, ‑8 or ‑16 dB) to accommodate high‑SPL sources.

All five of these microphones employ the same machined brass body, topped with a dual‑layer chrome mesh grille. The overall measurements are 213 x 50 mm, and the Frankfurt 49T weighs 530g, with its glossy black paint job making it stand out in a crowd. An embossed ADK badge marks the mic's front, while the model and serial number are displayed on a metallised label at the rear.

A lavish collection of accessories is provided, comprising a smart aluminium carrying case, a leatherette mic pouch, an Accusound CX4 star‑quad mic cable, a basic screw‑on hard‑ring standmount, a large cat's‑cradle shockmount (complete with a pair of spare replacement elastic cords), a foam wind gag, and a dual‑layer fabric pop shield on a long gooseneck clamp. Every item in this impressive collection of genuinely useful accessories is of decent quality, although the mic cable is only three-metres long, which is a couple of metres short of a standard studio length. Nevertheless, these included accessories put the miserly generosity of many high‑end mic manufacturers to shame.

Looking at the Frankfurt 49T's technical specifications, the sensitivity is given as a healthy 14.1mV (‑35dBu), so it will only need 40dB or so of gain to raise a spoken voice to line level. The equivalent self‑noise is 13dB (A‑weighted), which is roughly 6dB noisier than the best modern solid‑state designs. The maximum SPL capability is given as 122dB, rising to 138dB with the 16dB pad engaged, and that should accommodate pretty much anything you're likely to point the Frankfurt 49T towards! Naturally, the mic requires standard 48V phantom power.

The Frankfurt 49T model's custom‑designed GK49d capsule has a 34mm overall diameter housing a 27.5mm diameter diaphragm, the latter being five microns thick. The centre‑terminated design is loosely based on Neumann's K47 capsule element, but it is voiced specifically for the Frankfurt to provide an M49 sound flavour.

Listening to the Frankfurt 49T, it is immediately apparent that it is voiced quite darkly. In fact it's probably the darkest‑sounding mic in the T‑FET range, with an overall mellow sound character. The bottom end is generously full‑bodied when used at close range, and there is a mid‑range forwardness or emphasis that I think is due to low‑levels of mild harmonic distortion. Some would describe that as a musical richness, and others as a hint of coloration!

Despite the fact that the Neumann M49 is a valve mic, while the Frankfurt 49T is a FET design, the tonal similarity is marked, confirming the effectiveness of ADK's capsule‑design philosophy. The most apparent trait is at the high end, where the extreme highs are noticeably diminished, but below them the response peaks to deliver a sense of air and crispness. Like the M49, this peak changes with polar pattern, and is most pronounced in omni mode, delivering about +5dB at 12kHz, with a modest suck out at 4.5kHz. In figure‑of‑eight mode the peak moves down to about 5kHz, while cardioid mode delivers the flattest response with a much broader presence boost centred around 4kHz, and a smaller high peak at 12kHz.

The slightly muted top end of the Frankfurt 49T works particularly well on sources that tend to be a bit edgy or splashy — drum kit overheads, close‑miked strings and brass, heavily fuzzed electric guitars, and sibilant vocalists being the most obvious examples. The mid‑range forwardness and high peaks help the sound to cut through in a mix, but without sounding unnatural at all.

I like the Frankfurt 49T very much. It feels solid and reliable; it's pleasing on the eye, combining vintage style with modern presence; it performs well; and it sounds big, flattering and characterful. With such pronounced response peaks it won't suit every voice or source, but it will sound superb with many, and the old‑school body and mellowness is quite appealing. I especially enjoyed the sound it delivered in omni mode, but the way the response changes with pattern provides a useful means of tuning the tonality for different situations.

There are many M49‑esque mics, all of them valve‑based boutique models, with some being very faithful replicas and others aiming to convey the sound character in a more modern form, much as the ADK mic does. The current Neumann M149 must be on the list of course, although it sounds different from the original, naturally. The Flea 49, Peluso P49, Soundelux E49 and Wunder Audio CM49 are the main contenders for the M49 sound.

The Neumann M49, introduced in 1951, is a short and dumpy‑looking valve microphone, sharing the same body case as the M50 omni. Handy pub‑quiz knowledge is that the M49 was the very first microphone to offer continuously variable polar‑patterns, where a rotary control on the power supply allowed the polar pattern to be adjusted from omni through cardioid and on to figure‑of‑eight. Initially, the M49 employed a Hiller MSC2 valve as the impedance converter, but the design was upgraded to use the Telefunken AC701K in 1954. For the first five years of its production, the M49 also used Neumann's M7 PVC‑diaphragm capsule, but this changed to the K49 polyester unit in 1956. There was also a change in the transformer design from BV11 to BV11a, and the K49/701/11a combination remained until production stopped in 1974.

With all these different evolutions, as well as the component ageing effects, finding two original M49s that sound exactly the same is quite a challenge, but the dominant tonal character remains fairly consistent nonetheless. The top end of the M49's frequency response varies a fair bit with polar pattern, but the omni and cardioid modes shared a high presence peak centred at 10kHz (strongest in the omni pattern). This peak moved down to around 6kHz in figure‑of‑eight mode, and the roll‑off above 15kHz was fairly steep for all patterns.

An interesting take on a vintage classic, which shouldn't work but does. This solid‑state mic makes a good job of emulating an old-school valve design, with modern convenience and practicality, and attractive affordability with generous accessories.