ADK have tackled Neumann’s M49 before — but in this Custom Shop model, they’ve really pushed the boat out. Is it worth the extra cost?

I recently reviewed ADK’s Frankfurt 49T, a solid–state (FET) large–diaphragm microphone designed to honour the sound of the legendary Neumann M49 (which was the first microphone in the world to feature remote–controlled polar pattern selection). The 49T is part of ADK’s family of T–FET mics, which share common electronics and hardware, but emulate the most popular classic European mics through the use of different custom–designed capsules. The subject of this review, the Z49, is a large–diaphragm valve mic that plays an identical role but within the flagship Z–Mod range, which combines the expertise of ADK’s custom shop and their 3 Zigma brand. These Z–Mod microphones are assembled by hand in America using premium components and are, in effect, customised versions of the original ADK TT microphones.

As with the T–FET range, the Z–Mod collection comprises five mics that differ only in their body colour, capsule design and output transformer (Sowter, Lundahl or Jensen, depending on the specific model). The Z49’s siblings include the red Z12, white Z47, blue Z67 and yellow–green Z251, which reflect the sonics of AKG’s C12, Neumann’s U47 and U67, and Telefunken’s ELA M251, respectively. The Z49 is, logically enough, intended to honour the sound character of the Neumann M49.

The Z49 ‘Black Beauty’ microphone is supplied in a large aluminium briefcase with a comprehensive range of useful accessories. A grey Hammerite–finished power supply unit features a chunky power on/off toggle switch and large lamp bezel, with a mains voltage selector for 115 or 230 V AC supplies and an IEC inlet socket. A winged knob on the opposite end of the unit selects the polar pattern in nine switch steps between omni and figure of eight, with cardioid at the mid–point. The microphone connects to the power supply via a seven–pin XLR, while the audio output is presented on a three–pin XLR. Unfortunately, on unpacking the power supply of the review unit, I noticed something rattling inside and discovered that all the bolts securing both XLRs were very loose, with one set having fallen out completely, allowing the nut and washers to float around inside the PSU. The bolt was lying in the case. Perhaps some thread–lock compound might be a useful addition during assembly! 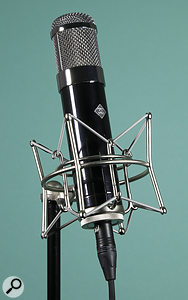 A nice wooden box with fabric–lined foam padding protects the mic itself, which measures 53 x 225 mm and weighs 750g. A basic screw–on hard–ring stand mount is provided along with a large cat’s–cradle shockmount, and both a simple foam wind gag and a metal–mesh fabric pop shield on a long gooseneck clamp are also included. Premium silver Accusound HD7 seven–pin mic (5m) and three–pin (3.5m) output cables are supplied, too. This is a generous collection of useful, good–quality accessories.

A separate hardwood box with a foam base contains three brand new Russian–made alternative valves as replacements for the selected tube installed in the mic itself. There are no ‘new old stock’ (NOS) treasures here, but the supplied alternatives allow some useful tonal experimentation. The review model was fitted with a modern Russian ‘Mullard’ ECC83 (12AX7), and an identical spare was included in the ‘options’ box alongside a Tung Sol 12AX7 and a JJ Electronics ECC803. The ‘Mullard’ valves are typical European ‘long–plate’ designs, while the JJ Electronics ECC803 features an even longer anode plate with a gold–plated grid, which is claimed to give a thick and harmonically complex mid-range. The Tung Sol tube is a remake of the early American 12AX7 variant, with a much shorter plate, and is claimed to have a clear, open high end with a warm, rounded mid-range. The aim, obviously, is for the user to select different valves to provide the required tonality. Changing valves is quick and easy, and only involves unscrewing the base of the mic, sliding the brass barrel off, and slipping the valve out of its housing (with the power off and the valve cooled down, of course!).

The simple impedance converter electronics are housed on a printed circuit board mounted on one side of a metal frame that extends between the capsule and XLR base. Full–size components are used throughout. A second circuit board on the reverse of the frame has a cut–out to accommodate the valve, and a Lundahl LL1530 output transformer is fixed to the base of the frame.

The capsule, fixed to the top of the frame, is protected within a dual–layer chrome mesh grille and is the same GK49D capsule as found in ADK’s Frankfurt 49T. It features two 27.5mm–diameter gold–sputtered mylar diaphragms, each five microns thick and centre–terminated. The overall capsule housing measures 24mm in diameter and the design is loosely based on Neumann’s K47 capsule element, but it is voiced specifically to deliver an M49 sound flavour.

The technical specifications are much as would be expected for this kind of mic, with a sensitivity of 17.8mV/Pa (–32.8dBu) and self–noise of 16dB (A–weighted). The maximum SPL is 129dB (for one percent THD) and, as there is no pre–attenuation option on the mic, the Z49 may not be the ideal choice for close–miking particularly loud sources.

Like the Neumann M49, ADK’s Z49 changes in sound character audibly with different polar pattern selections, particularly in terms of its high–end presence peaks — and this provides an additional option for tuning its tonality in different situations. I wasn’t able to compare the Z49 with an original Neumann, but even if I had there were so many M49 variants over the years, and so many have deteriorated away from the original sound anyway, that such comparisons would be largely pointless. The important question is not whether the Z49 “sounds like an M49”, but whether it features those sonic characteristics that made the M49 a popular and useful studio tool — and I’d say the answer to that is an emphatic yes.

The Z49 is primarily intended as a microphone for lead vocals, which it handles with great aplomb — especially male vocals. It has masses of character, with a full–bodied bottom–end bloom and a rich and slightly forward–sounding mid-range. The top of the voice range benefits from a slight presence lift which aids diction and clarity, but above that the response falls quite quickly to give a restrained or ‘dark–sounding’ character. In that respect it shares some characteristics with a vintage ribbon, as well as the classic Neumann M49 which it is trying broadly to emulate.

The Z49 is not technically as quiet as a modern solid–state mic, but it will not be perceived in any way as noisy in normal applications, and its relatively high output level won’t stress any preamp unduly, either. Different valves affect the tonality, slightly altering the character, mainly in the mid–range richness and high end — but this really is pretty subtle in normal use and I was quite happy to use the standard–fit Sovtek ‘Mullard’ for most of my review trials. However, the character of different valves does tend to be revealed more clearly when the incident sound level is very high, since that pushes the valve more towards saturation and its distortion characteristics come into play.

Electric guitar amps, solo strings (especially cello) and wind instruments like saxophones all come across well on the Z49, and I found I generally favoured the character of the JJ Electronics valve for these louder sources. I didn’t have the opportunity to try it on orchestral brass, but I would imagine it would fare well there too, provided the sound level didn’t push the SPL limit too hard.

The ADK Z49 is a pretty expensive microphone by any standards, but this is reflected fairly in the build quality, the supplied accessories and — most importantly — in the sound quality. The mic feels solid and reliable, and the gloss–black paintwork looks classy, combining vintage style and modern presence. At this price a microphone has to be chosen only after extended personal audition, but the Z49 is certainly an impressive performer and would be well worth adding to one’s shortlist if the tonal character descriptions appeal.

Boutique valve–based M49 microphones are plentiful, some being faithful replicas and others less precise homages. The current Neumann M149 must be on the list of comparable alternatives of course, along with the Flea 49, Peluso P49, Soundelux E49, and Wunder Audio CM49.

A high–quality large–diaphragm valve microphone which uses modern design principles and construction methods to approach the sound character of the classic Neumann M49 while maintaining modern convenience and practicality.