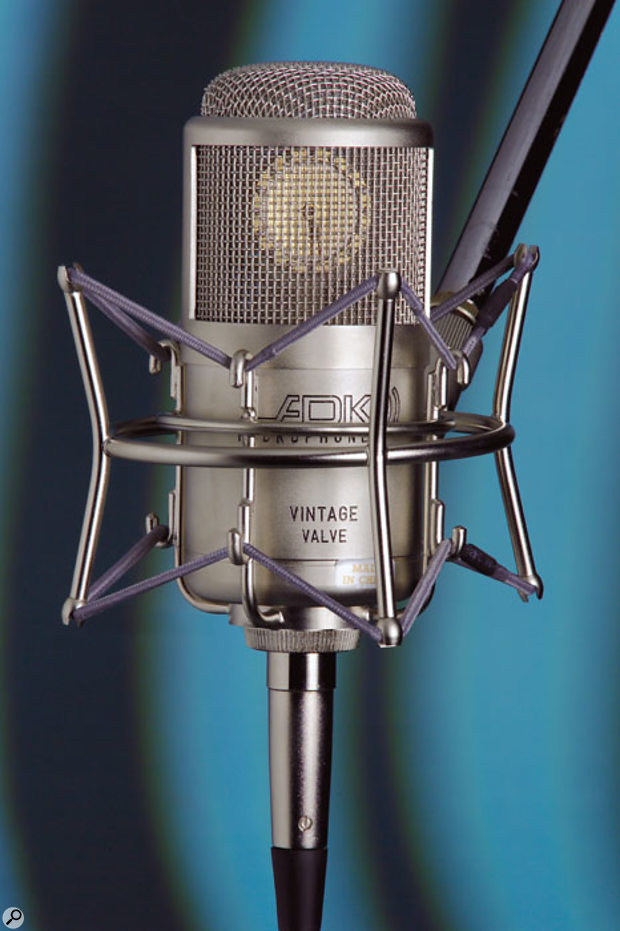 This new mic combines a colourful valve sound with the flexibility of nine different polar patterns.

ADK's Vintage Valve A48 is, as the name suggests, a valve microphone, though the valve in question is a current 12AX7 dual triode, not a hard-to-find antique. The affordable price of this mic is of course due to its Chinese provenance, and it comes in a nice lockable camera case complete with shockmount, PSU, and seven-pin cable. Oddly though, the shockmount comes in two pieces, one part shipped fitted to the mic and the other in the camera case, so you have to arrange the included elastic belts into the suspension hooks yourself. If this is the Chinese trying to save on labour costs, it has to be a first!

A rotary pattern switch on the PSU gives away that this is a multi-pattern mic, in this case going from omni to figure of eight via cardioid, with six further intermediate stages. No response plot was provided in the box, just a spec sheet for a completely different ADK mic (A51 series!), but checking with ADK revealed the mic to have a nominal 20Hz-20kHz response and a sensitivity of 12mV/Pa. The maximum SPL is 128dB — perfectly adequate, but not exceptional — and the EIN self-noise is 20dBA, which is slightly noisier than an equivalent solid-state mic of similar quality, but acceptable for close-miked vocals. However, there are much quieter mics around if you need them, with Rode's current range being about the quietest at the 'affordable to medium' end of the UK price range.

Mechanically, the mic certainly looks the part, with a chunky nickel-plated brass body and a large grille protecting its one-inch-diameter, dual-diaphragm capsule. A knurled nut at the bass of the mic secures the shockmount, and the seven-pin XLR connector has gold-plated pins. There are no pads or roll-off filters, and the utilitarian PSU houses the conventional three-pin XLR, providing a balanced feed to your mixer or preamp. An IEC cable connects the PSU to the mains, though the review model came with a cable fitted with a European plug, not a British one.

This mic is designed with close-miked studio vocals in mind, so that's how I tested it. The sound is definitely coloured in a way that's designed to thicken the sound and also to add a little edge to it. This gives the mic a big, up-front sound, though it can exacerbate sibilance in those singers who have problems in that area. This mic also works fine for recording acoustic instruments, though the 'tube sound' has been slightly overdone for my own taste. The sound gets thicker still when the mic is used close up in cardioid or figure-of-eight modes, due to the proximity bass boost that affects these patterns, but I can still see a lot of singers liking the sense of density and authority this mic conveys. If you need a tube mic with attitude at a bargain price, then this is a model to try, but as with all 'character' mics, you need to try it to see if it suits your particular vocal style.

This attractively priced mic is designed to add flattering coloration to vocals. If you need to add density and edge to your voice, this could be a great choice.