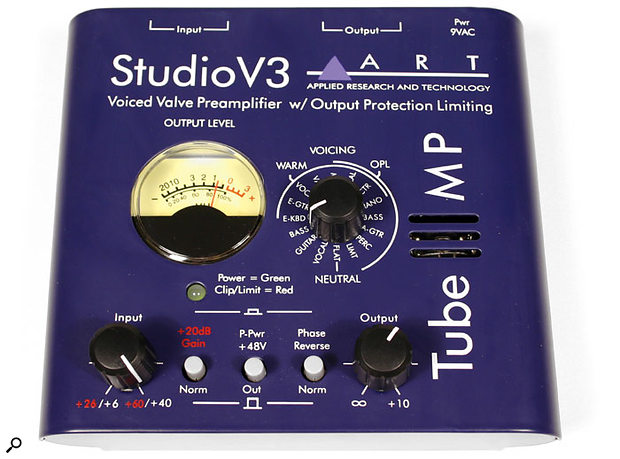 This preamp can accept mic-level signals, line signals, or high-impedance instrument signals on balanced XLRs or unbalanced jacks, while the output is available both on a balanced XLR and an unbalanced jack. A balanced output jack would have made more sense for connection to typical home-studio equipment. Up to 70dB of mic gain is available, and there's a clear, illuminated moving-coil VU meter to read the output level. Separate gain controls are fitted for the input and output, and there's a switchable 20dB gain boost, 48V phantom power, and phase reverse. A multi-colour LED shows that the unit is powered, as well as indicating clipping/limiting.

The rotary control to the right of the meter is what makes this unit a bit different. Here you'll find 15 different switchable voicings (plus a neutral position), each using varying degrees of tube warmth, limiting, and subtle EQ. The presets are: Neutral, Vocal, Guitar, Bass, E-Keyboard, E-Guitar, Vocal (warmth), Valve, Multi, Vocal (warmth and OPL), Acoustic Guitar (warmth and OPL), Piano, Bass, Acoustic Guitar (OPL), Percussion, and Limit. When the signal level is high enough to approach clipping, the green power LED turns red, though this also signifies that the limiter is operating when OPL is activated.

Other than selecting presets, the unit operates like any other mic/line preamp. All you need to do is decide whether or not you need the gain boost switch (which you can think of as being a pad in reverse), then set the input gain and the output level with the Clip/Limit LED and meter to help you along. Selecting a preset introduces a noticeable but still quite subtle tonal change (more noticeable on some of the electric-instrument settings) and most have been well chosen to suit their respective sources. However, with any unit of this type, it pays to try all the presets regardless of what sound you're working with, as you might find, for example, that the electric-guitar setting works well on a hip-hop vocal. You should also keep in mind that the output limiter is there primarily as a safety feature, though you can create more aggressive tonal effects by hitting it harder.

Overall the sound has a solid, comfortable feel to it, with plenty of detail but no rough edges. The frequency response is quoted as 10Hz-30kHz (±0.5dB), and the equivalent input noise is -129dBA on the mic input, which is comparable to what you'd expect from a well-designed mixer mic preamp. The dynamic range is typically 100dB and the output level on the XLR is a very healthy +28dBu, which should keep even the greediest soundcard input happy.

I liked the confident sound of this little preamp, and the presets really do offer a useful choice of characters without getting silly. It's almost like having several different mics to choose from. The metering is better than most small preamps of this type offer, and both the gain and level controls are nicely progressive over their entire range.

I found the ART Tube MP Studio V3 to be a versatile and sweet-sounding little mic preamp/DI box. While it might not have the finesse of some of the more up-market, elite models that use high-voltage tube circuitry, it is rather nicer than the preamps found in most small mixers, and tonally a lot more versatile. I'm not a big fan of presets, but these do the job well without detracting from the musicality of the sound, and there's enough choice to suit just about anything you might want to record.

Low-voltage tube circuits like this don't offer the same flavour of warmth as high-voltage designs, but the results here are still very musical and don't tend to go muddy as some low-voltage designs do. I think the Tube MP Studio V3 would make a great companion for a digital desktop studio, where its high output drive capability and tonal versatility should help the user inject a little welcome character into the recorded sound.

The Tube MP Studio V3 is a good solution for anyone who simply needs mic preamp and DI facilities, but who also likes the idea of having different sonic characters available.