AEA's new N22 hopes to bring the coveted ribbon-mic sound up to date and within reach of the masses. We power it up...

AEA have a well-earned reputation for building seriously good ribbon mics, most of which are priced out of reach of the typical project studio operator. The N22 model is the first in their new Nuvo series, and it goes a long way towards addressing that issue by hitting a much lower price point while not compromising on quality. This mic represents designer Wes Dooley's idea of what a modern ribbon mic should be, so in addition to the price and general performance, the mic is also voiced in a more contemporary way compared with traditional ribbons, as well as being designed to be relatively robust and high-SPL tolerant.

AEA say the design brief was to come up with a mic that bridged the gap between the top-end clarity of a capacitor mic and the classic tone of a ribbon, and my experiences in using the mic would suggest that they have achieved that. Apparently they started out by listening first and taking measurements only after their panel of golden-eared musicians told them it sounded right. Importantly the mics are hand-built in Pasadena, California, just like AEA's high-end models. The mic comes in a protective plastic clam-shell case with a microphone stand clip, a fabric protective sleeve and a detailed user manual. Registering the microphone with AEA will extend the one year warranty to three years, which is definitely worthwhile.

Employing the same 'big ribbon' operating principles as the better known AEA R44 and R84 models, the N22 includes active circuitry operated from phantom power to get around the usual difficulties of low sensitivity and optimal impedance matching, which are often concerns with passive ribbon models. It is, however, recommended that the mic is plugged and unplugged with the phantom power switched off. The styling is also very different from the somewhat retro, boxy look of most AEA models, the N22 being roughly cylindrical and just a shade under nine inches in length.

Being a symmetrical ribbon microphone, the polar pattern is fixed at figure-of-eight, and the polar plot shows the response to be very even across the frequency range. The front and back of the mic are voiced identically, though the back, of course, has opposite polarity compared to the front. Positive polarity is achieved with the Nuvo logo pointing towards the sound source. Though the usable frequency range is quoted as 20Hz to 20kHz, the upper -3dB point appears to be around 12kHz, after which the response drops away smoothly to be around 13dB down at 20kHz. However, please don't construe this as implying that the mic sounds 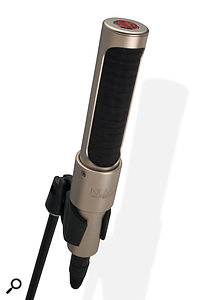 in any way dull: the mechanical simplicity of ribbon mics enables them to capture a very natural sound, which in the case of this model retains a strong sense of high-frequency detail and articulation even before you reach for the EQ.

At the heart of the microphone is a pure aluminium corrugated ribbon just 1.8 microns thick and 2.35 inches long. Protected behind a fine gauze to mitigate the effects of breath or other air movements, the capsule is capable of handling SPLs up to 141dB, which means guitar amps are not going to scare it. Having said that, the mic should be protected from strong air gusts, so it is a good idea to pull on the protective sleeve when it isn't in use.

The active electronics, which comprise a JFET preamp incorporating a custom German transformer, give the mic a sensitivity of 6.2mV/Pa (at 1kHz with no load) and, as with any well-designed ribbon mic, the off-axis cancellation at 90 degrees is almost perfect with around 90dB of rejection. I couldn't find any noise figures in the manufacturer's specifications, though my practical tests didn't expose any undue noise.

Cited applications included close-miked acoustic and electric guitars, piano, vocals and drums. AEA also claim that the mic will stand up to live vocal performance, where the in-built mesh screen means that an external pop filter is often not required. Though high SPLs can be tolerated, ribbon mics in general don't like high-amplitude, low-frequency sounds, as these can stretch the ribbon. AEA suggest that if you want to use a ribbon mic for recording things like kick drums or bass guitar cabinets, you should angle the microphone to make sure that no wind blasts hit the ribbon head-on. My own 'belt and braces' approach is also to use a conventional pop shield when recording instruments capable of producing high-intensity, low-frequency notes or thumps.

If you're new to ribbon mics, you might be surprised at the extent of the proximity effect which produces a significant bass boost when the mic is close to the sound source. This is inherent in all directional microphones and is most noticeable in figure-of-eight mics, and while some vocalists like to 'work' the proximity effect by varying their mic distance during performance, you may find that a low-cut filter is necessary. The N22 is designed to minimise the proximity bass boost but you have to be aware that it is still there and work accordingly. On that note, AES have included in the manual some very practical advice on recording various sound sources, which even experienced recordists may find useful. Electric guitar amps can be recorded with the mic right up against the grille without risking damage to the N22, though you can experiment with varying the mic distance and position across the speaker as this will change the tonality, the amount of room ambience captured and the contribution of the proximity effect.

AEA are also brave enough to suggest that you try the N22 on close-miked drums as well as in their more familiar role as overheads. The figure-of-eight response can help here as careful positioning will allow, for example, the front of the mic to pick up the snare drum while the rear picks up the hi-hat.

On the precautions side, it must be remembered that the strong magnets used in ribbon mics create a significant magnetic field that might affect hard drives, credit cards, magnetic key cards, analogue tape and suchlike if placed too close. It is also wise to cover the mic when not in use, not only to protect the ribbon from air blasts, as mentioned, but also to avoid small iron particles being drawn in by the magnets. Conversely, ribbon mics can also pick up hum from nearby transformers, so you need to be aware of that when positioning the mic.

My results from voice and instrument tests with the mic were largely in accordance with Wes Dooley's design ethos, insomuch as the recorded result exhibited the fullness and smoothness of a classic ribbon mic, but with more than the usual 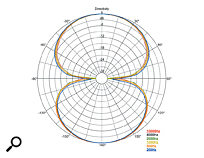 The N22's polar response is very well controlled across the frequency range. Both the front and rear pickup lobes are identical. sense of 'air' around the highs, lending a capacitor-like sense of detail to the tonal character. Voice comes across with a strong sense of focus while stringed instruments sound lively and articulate. There were no gain problems, as the active circuitry delivers plenty of output.

This mic is voiced to have a gentle LF roll-off below 200Hz, which partly compensates for the proximity effect and allows it to be positioned a little closer to the sound source than you might expect for a ribbon mic. This was evident when I did a side-by-side comparison with my SE SRN1 ribbon mic, which had a noticeably fuller-sounding low end. Being able to use closer miking techniques can help reduce the amount of spill or room reflections picked up by the mic, but the excellent off-axis response of the mic means that such spill and room reflections as are picked up will at least sound natural and accurate — which is definitely not the case with the majority of cardioid pattern microphones. And as with all figure-of-eight mics, you can exploit the excellent off-axis rejection to create separation by aiming the side of the mic towards the sound source you wish to reject.

Overall AEA have seemingly achieved exactly what they intended to, by producing a ribbon mic with a brighter, more modern sound than their classic models and at a more accessible price. The standard of construction is excellent, while the ribbon-meets-capacitor tonal character means the mic can be used in rather more areas than a conventional ribbon microphone can.

SE Electronics's active Voodoo ribbon is the closest I can think of in terms of price and performance, though there are numerous other alternatives if you're after the classic mellow tonality of a more traditional ribbon microphone.

A modern take on the active ribbon concept from a top US ribbon microphone manufacturer at a more affordable price.