Akai combine MPC-style pads with more traditional sliders and rotary encoders in their cost-effective new desktop USB MIDI controller box. Is it destined to be a hit? 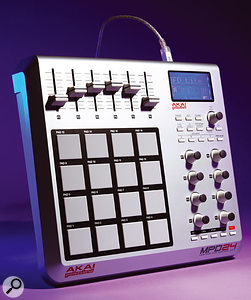 Photo: Mike CameronDespite the enduring appeal of Akai's MPC range, some musicians inevitably find themselves lured away from these chunky sampling workstations into the feature-heavy world of computer sequencing. Weighing heavily on the minds of these converts, though, appears to be something of a nostalgia for small grey rubbery squares — a nostalgia that Akai may be seeking to capitalise on with their MPD16 and MPD24 USB MIDI controllers, each of which boasts 16 of the flexible little blighters. The latter machine is the subject of this review, combining said quivering quadrangles with eight rotary controls and six sliders.

Pulling the MPD24 out of its box, it feels weightier and more robust than a lot of other MIDI controllers I've used, and the solid rubber feet anchor it nicely to the desk in preparation for the hammering it will surely receive. Dominating the top panel are the 16 full-size MPC-style trigger pads, just as you'll find on an MPC2500 or MPC4000. These can send MIDI Note messages, either with Note On and Note Off tracking your pressing and releasing the pad, or with successive pad hits toggling Note On and Note Off messages. As any MPC user would expect, the pads are both velocity and pressure sensitive, and an internal menu option lets you adjust velocity-sensitivity curves to suit your own playing style. The Full Level button forces all velocity values to 127, while the 16 Levels button gives you fine control over one sound by duplicating it across all the pads, allowing you to trigger the same Note message at 16 discrete velocity values. The four Pad Bank switches quadruple the number of different MIDI messages you can transmit from the one set of pads. MIDI Program Change messages, complete with Bank Select MSB and LSB messages if required, can be assigned to any pad in place of a MIDI Note message, although you can also send these messages independently of the pads, using the dedicated Program Change button and data knob.

Above the pads are six sliders and to the right are eight endless rotary encoders. These can be programmed to send MIDI Aftertouch data or any MIDI Continuous Controller, with selectable maximum and minimum transmitted data values allowing for finer or inverted control laws. One of the rotary controls was obviously malfunctioning on my unit, although all the rest worked smoothly and reliably, so I'm assuming that this is a problem with quality control rather than anything wrong with the pot design in itself. In the bottom right-hand corner of the top panel is a small set of transport controls that will simply send out the appropriate MIDI Machine Control commands when pressed, and cannot be reassigned.

Photo: Mike CameronAround at the back are MIDI In and Out sockets and a USB connector. If the MPD24 is connected to a suitable computer (the unit is PC and Mac class-compliant, so no drivers are required), the MIDI sockets act as a simple one-in/one-out MIDI interface, while movements of the top-panel hardware controls can be transmitted via 32 additional MIDI channels directly into your sequencing software. Without a USB cable, hardware control motions can be transmitted over 16 MIDI channels via the MIDI Out socket. Also on the rear panel are a Kensington-standard lock point and an input for an optional 6V DC power supply. When connected to a computer, the MPD24 draws its power via the USB connection, so you're only likely to need to buy an additional wall-wart if you want to use the unit free-standing.

Setting up the pads and controls is pretty straightforward, via the backlit LCD, and your edited setups can be stored to 32 internal memory presets. A software editor/librarian, Uniquest Editor, is provided on a CD-ROM and is also available via Akai's web site. This is useful if you have lots of setup work to do; I found it very quick to use. A welcome extra bundled with the MPD24 in the UK is a 'Lite' version of the BFD drum-sample instrument, and one of the MPD24's presets gets you started with that. Although the range of sounds available is quite limited, what's there sounds as good as you'd expect, making this a nice freebie.

There's not too much to say about the performance of a device such as this, beyond 'I hit it, I twiddled it, it sent out MIDI messages', because what it does it does cleanly, efficiently, and without a great deal of fuss. What is more of a concern for me is what it doesn't do. Immediately I saw the 16 Levels button, for example, I began imagining all sorts of step-sequencer-style high jinks via Continuous Controller messages, but the facility actually only works with note velocities. This can't really be an oversight, either, because the kind of functionality I was hoping for is built into Akai's MPC2500. I was also disappointed that there were no facilities for handling NRPN, SysEx or even pitch-bend data, especially as the MPD24 has a display at least the equal of much more flexible fader units such as the Kenton Control Freak or Peavey PC1600X. That said, the simple feature set helps operational speed and simplicity, and Akai have always been inclined to play those cards most strongly with the MPC range.

If a controller of this type fits your desktop and modus operandi better than a traditional keyboard, the alternatives on the market are few. For my money, the MPD24 just out-punches the fairly similar M-Audio Trigger Finger (reviewed SOS September 2005), offering four pad banks and a better display that makes it easier to program from the front panel. The Korg Pad Kontrol (reviewed SOS July 2006) is a trickier call, sacrificing, as it does, most of the non-pad controls in favour of one of the funky X-Y controllers I've always liked so much on the Kaoss Pads. And if you're just after MPC-style pads, Akai's own MPD16 would be better value for money. Overall, though, the MPD24 is a solid, workable controller that benefits from a robust feel and a simple user interface.

This robust and straightforward USB hardware controller puts in a solid performance against the current market competition.