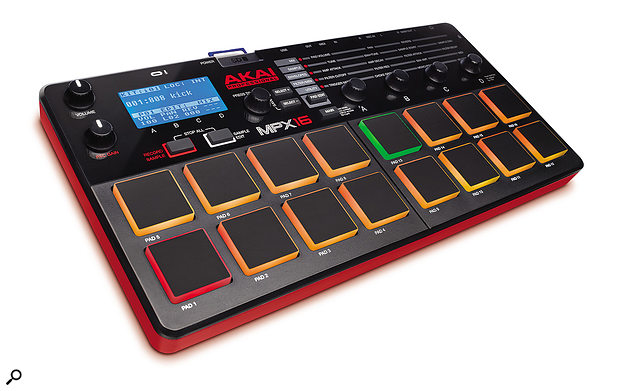 Akai’s MPX16 has more pads and functions than its MPX8 predecessor, but remains just as reasonably priced.

The Akai MPX8 was a neat little sample player and MIDI/USB drum controller. Its samples resided on cheap and available SD cards and even though somewhat sluggish when loading large files and picky about the formats it would accept, it was priced to smooth over such inconveniences.

With twice as many pads, more memory and costing less than double, the MPX16 is the logical next step. The addition of resonant filters for each of its 16 pads, plus 16-bit sampling and sample editing are just some of the many enhancements in this, Akai’s smallest, lightest and most affordable sampler to date. With so much going for it, is there anything not to like?

Compact and portable at just 29 x 14.5 cm, the MPX16’s red and black plastic shell isn’t heavy but feels durable enough for a life bouncing around in a backpack or hand luggage. Most edit operations are performed in a 4x5 matrix, accessed by a single button and four encoders labelled A-D. A blue, backlit screen dishes out information and its editable fields are navigated by a pair of buttons with a combined value encoder and enter key providing assistance when necessary. This encoder is usually the most important control as it alone (by the action of pushing and turning) can modify values in larger increments.

The pads light in amber, green and red to indicate whether a sample is assigned, currently playing or selected for edit. The pads perform well enough once you accept there’s no way to adjust their sensitivity. On the review model, I wasn’t able to trigger a note with a velocity less than nine and while hitting the maximum was easy, getting a predictable spread took practice. The aftertouch is polyphonic and has a light response, but sadly it’s not applicable to any of the internal samples. Aftertouch only becomes relevant in the MPX16’s role as a MIDI controller.

I was glad to see all audio connections are full-sized quarter-inch jacks, which in this case means stereo inputs and outputs, plus a headphone socket. The two MIDI ports are of regular proportions too and joined by a USB connector capable of carrying power. Alternatively, an external adapter is supplied so you can function without a computer present — and there’s a good reason why you might want to, which I’ll come to later.

Apart from the small collection of built-in factory samples, all storage operations require an SD or SDHC card. The card slot is stated to support any SD type but, remembering my experiences with the MPX8, I made sure to source the fastest I could find, a class 10.

After a short boot-up, the MPX16 automatically loads the default kit, i01. The 10 internal kits are a means of making noises if you don’t yet have an SD card; they feature combinations of classic drum-machine samples, bass synths, shouts of ‘yeah’ and so on.

It’s important to stock a card with suitable audio as soon as possible, the key word there being ‘suitable’ because, as discussed in January 2014’s MPX8 review, there are some file-format restrictions. Akai provide a file conversion program — a fairly primitive affair and different to the one I tried in the earlier review. With my usual childlike optimism I chose a random bunch of samples, dragged them into the conversion utility and clicked the ‘convert’ button. After I specified a folder for the output files, it was all over. I then dragged the resulting WAV files to the SD card in the MPX16, conveniently transformed into a card reader by booting while holding the ‘Main’ button. Alternatively, a standard card reader can be used; either way, you’re now able to build kits full of your own samples. Theoretically, that is. Several of my samples, apparently processed without error, were mysteriously empty. After doing it again and being puzzled some more, I decided to abandon Akai’s program and bulk-process my WAVs in Wavelab, based on the requirements stated in the manual.

Up to 48MB of samples (stereo or mono) can be loaded at a time, but even with the fastest card I owned, this could be a lengthy process. To give you an example, a single 32MB WAV took 1 minute 48 seconds to load. Furthermore, during the load process, there was a constant whine, which I traced to the USB connection taking power from my Mac. This might not always be a bad thing. In the studio, the whine could be a handy indicator that long samples are still being loaded, but it would suck in a live situation. Fortunately, the issue disappears when power is taken from an external adapter.

Having successfully populated a card with samples, assembling 16 of them into a kit is as easy as touching pads and turning encoders. By repeatedly pressing the ‘Pad Edit’ button, each row of the edit matrix becomes live for editing. In typical use, the four encoders are adequate for minor adjustments, but no fun for large increments. For example, in the second row, adjusting the sample start and end points can involve large numbers, a task for which the value encoder is infinitely superior.

On the rear panel, which as you will notice is a fetching red colour, we find quarter-inch sockets for headphones, stereo output and stereo input, MIDI I/O ports, a USB port, an SD card slot and a socket for the external power supply.When designing a kit, each sample can be transposed further than the MPX8. Initially the limit looked to be an octave up or down, until I noticed the simple ‘envelope > tune’ parameter, which can extend it by another octave or perform the usual role of pitch-sweeping. Two envelopes offer attack/decay shaping of the filter and amp stages before hitting the single effect, reverb. This has no adjustable parameters (despite there being an unused slot in the matrix ideal for adding adjustment of the reverb decay time), but the factory setting is a good all-rounder for percussion.

The resolutions of the pan, volume and reverb mix controls were all higher than on the earlier model but pride of place for sprucing up every sample must go to the resonant 24dB low-pass filter. It sounds pretty good too, although some provision for injecting velocity-control to the filter cutoff or envelope depth could have added even more life.

The bottom row of the matrix determines how samples are triggered, with the expected one-shot, looping and hold modes of the MPX8 implemented. Select polyphonic playback and you can fire off repeated instances of a sample, up to a polyphony limit of 64 voices. This suggests applications involving long, ambient loops, but for percussion it adds a more natural feel to multiple strikes of cymbals and gongs, for example.

Striking a blow for sampling on the move, MPX16 has a built-in stereo microphone. This is easily overlooked but could be a life-saver in some situations, especially given the tools provided to trim and clean up afterwards. The mic is sensitive to the physical vibrations of the MPX and a better option, if possible, is to use the (line-level) audio inputs.

The sampling process is fairly uncomplicated, as you’d expect from a company whose name was once synonymous with samplers. First choose whether the recording is sourced from the left input, the right or both, in the case of stereo. Having decided on a source and set the gain appropriately, the last choice is whether to start sampling after a threshold is exceeded or manually. Then it’s just a matter of pressing a button when ready.

The final setting of note is ‘Mon’, which is a switch for monitoring the recording through the MPX’s own outputs. Sampling is ended by a press of ‘value’, after which you either keep or discard the recording. There is no way to audition the result before making this decision so keeping is usually the only practical option, after which the sample can be named and assigned to a pad.

Adjacent to the Sample Record button is Sample Edit, which offers a series of processing options, including ‘delete’, which you’ll need if the latest sample turned out to be a turkey after all. You can trim the start and end point until it’s just right, then execute the command to non-destructively chop your audio to size. In this way you can extract or copy portions of the WAV to new files or completely discard sections outside the trim points. Further processes include reversing, normalising, adding a fade-in or out and converting from stereo to mono. In general everything worked as expected, although some edits threw up a ‘format error’ message. This even occurred for samples created by the MPX16’s own processing and apparently the issue will be addressed in a forthcoming update.

With its pads, portability and price the MPX16 has much to be proud of, but you can’t dispel the feeling that, with more attention to detail, it could have been superb. With 48MB of RAM to play with, it’s a pity you can’t take full advantage of it, say by layering multiple samples and velocity-switching between them. Similarly, it’s a shame the polyphonic aftertouch can’t be drafted in to add movement to the MPX’s samples, but at least the feature injects extra pleasure when driving other gear. As a USB/MIDI controller for percussion, the MPX scores solidly and its potential for use as a module will increase dramatically once the Omni mode issue is resolved. However, the biggest limitation isn’t MIDI-related, it’s the time taken to load large samples. It almost makes a nonsense of the generous RAM allocation.

Looking back, I’ve listed plenty of moans and niggles so it’s only fair to remark that, with a selection of favourite samples arranged into kits, the MPX16 is a very playable drum surface and a controller you can take anywhere. Perhaps more importantly, it’s a 16-bit Akai sampler with filters, envelopes and far more tweakability than its predecessor. If employed mostly for short, percussive samples, the loading time won’t even be an issue, and in that context, the MPX16 begins to look rather inviting.

If sampling isn’t important but having 16 pads is, you might consider two MPX8s, but beyond that the alternatives are scarce.

Occasionally, 1983 seems like a lifetime ago, particularly when a new device slips into the wild impeded by an obvious character defect. The MPX16 transmits on a fixed MIDI channel (10) but receives incoming notes on all 16 channels without discrimination. Removing this weird Omni mode implementation is, unsurprisingly, Akai’s number-one feature request and hopefully it will happen soon. It won’t be an issue if you plan to trigger the MPX’s samples over the USB connection, but it sure limits the MPX16’s viability as a MIDI module. Totting up a few more missed opportunities, the encoders don’t send MIDI CCs, nor does the MPX respond to them.

The MPX16 is a worthy effort that is so nearly wonderful. It scores highly as a portable drum controller, sampler and sample player, but is let down by slow sample loading and a poorly conceived MIDI spec. Fortunately, the price should save it from eternal damnation and some fixes are in the pipeline.