Mic technology has come a long way since AKG launched the original C1000S. Does the latest version offer enough improvements to keep up with the competition? 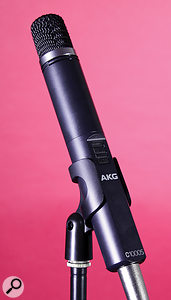 AKG's original C1000S microphone was launched way back in the mid-1980s, when existing capacitor mics were still too expensive for the majority of home recording enthusiasts to even contemplate owning one. The back-electret C1000S gave that early generation of recording musicians a taste of the capacitor microphone sound. It also found its way into many live-sound applications, partly because it was rugged, and also because it could be run from a battery, in a time when many budget live mixers couldn't supply 48V phantom power.

In the later part of the 1980s, affordable capacitor mics started to find their way onto the market from Russia and East Germany, putting pressure on the big-name European microphone builders to come up with more affordable models to meet the needs of the expanding home studio market. That pressure was further increased when China got in on the act, and today there's a huge choice of capacitor microphones covering all price ranges — from around £50$50 up to the price of a small car!

Over those three decades AKG continued to build and sell the C1000S (with a few minor design changes along the way), but what had once looked like a ground-breaking bargain was starting to look a little tired amongst the competition, and as users became more discerning, the C1000S gained a reputation for sounding slightly less open and bright than its counterparts, with a tendency towards harshness in the upper mids. Clearly, it was time to revisit the product to bring it up to date.

The revised C1000S reviewed here looks very similar to its predecessor, being a small-diaphragm microphone in a 'thick stick' end-fire format. Its cast-alloy body is finished in an attractive dark blue-grey metallic paint, and there's a recessed slide switch for turning the mic on or off. A foam-lined mesh basket is fixed to the upper half of the body, which, when unscrewed, exposes both the capsule and the battery compartment. All the electronic circuitry is hidden away in the bottom half of the body.

The gold-sputtered back-electret capsule is designed to cope with realistic levels of humidity, and where no phantom power is available the mic can still be powered by two AA batteries for up to 120 hours — though you have to remember to switch the mic off after use to avoid draining the batteries. A battery status LED adjacent to the power switch shows the battery condition when running from batteries, and this flashes a few times after switching the mic on to show the battery is OK, or lights continuously to show that the battery is on its last legs. There's also an 80Hz bass-cut switch and a switchable -10dB pad, though these are located in the battery compartment, which means unscrewing the two halves of the body to access them. This is clearly a cost-saving measure but at least it prevents accidental operation during live performance.

As with the original C1000S, the polar pattern can be changed from cardioid to hyper-cardioid by fitting a plastic widget over the capsule, which again means unscrewing the two halves of the housing. A second plastic widget provides extra presence boost in the 5 to 9 kHz range, to optimise the character of the microphone to various speech and instrument sound sources. Both plastic widgets, a foam windshield, a stand clip and a canvas storage pouch are shipped with the microphone.

On a technical level, the mic is adequately quiet for close-miked applications, with an equivalent input noise (IEN) of 21dBA, and its sensitivity is broadly comparable with other microphones of a similar type. The maximum SPL with the pad switched in is 137dB, and the frequency range is quoted as 20Hz to 20kHz, with a broad presence peak of around 4dB, starting at around 3kHz and tailing off at 10kHz, without the presence booster widget fitted. Being a cardioid-pattern mic there's also a generous bass boost when the mic is used up close, as would normally be the case for live vocal work, but using the low-cut switch helps to balance that. When not using batteries, the mic will run on phantom power of anywhere between 9V and 48V.

I checked the mic against an original C1000S borrowed from a college, but their model was pretty beaten up so any sonic differences might simply be down to their mic having had a hard life. The filter was left set to flat and the pad switched out. I also put up an Audio-Technica AT2020, as that's in a similar price range and is also a back-electret cardioid model.

On vocals the new C1000S exhibited a similar high end to its predecessor, tending to emphasise vocal sibilance a little more than the AT2020. Its tonal character is obviously influenced by the broad, upper-mid presence region giving it a very slightly 'forward' quality that could appear harsh on some sound sources, but which would help with intelligibility when performing live. The lower mids definitely sounded warmer on the new C1000S than on the old one I had here, though the AT2020 still produced a slightly more full-bodied sound that I felt was more natural. On acoustic guitar both the AT2020 and the new C1000S delivered a well-balanced result, with the old AKG lacking a little weight but otherwise working as it should.

The plastic response and pattern tailoring widgets work well enough, but they can be tricky to fit and even harder to remove, where it becomes necessary to grip the capsule to prevent it being pulled off its mount as you wrestle with the plastic parts. I don't feel entirely comfortable with the end user having to man-handle the capsule even though, being a back-electret unit, it is pretty robust. For studio use I prefer the mic just as it comes with a cardioid response and no extra presence, though for live performance you may find one of the modified voicings works better for you, in which case the widget can be left fitted. Similarly, having to unscrew the mic body to get to the pad and low-cut switches is a chore in the studio but is a valuable anti-tampering defence in live applications.

Ultimately the C1000S has never been a bad microphone given its price, but I'd hoped that the updated version would turn in a significantly better performance against the competitors in its price range, rather than just being a tweaked version of the original, which this sounds like to my ears. At one time the C1000S was a no-brainer purchase for anyone wanting capacitor-mic performance at an affordable price, but now it has to fight it out with a vast array of competing models, many of which turn in an extremely good performance.

Other than the Audio-Technica AT2020 used as a reference during the review, there's also the SE Electronics SE X1 and any number of other worthy models from the likes of MXL, Rode, Studio Projects and more, so as ever try to find the model that best suits the voice or instrument you'll be using it on, as that won't always be the one with the most impressive paper specification.

A slight update on the original C1000S, but will it be enough to give it a lead on its many competitors?