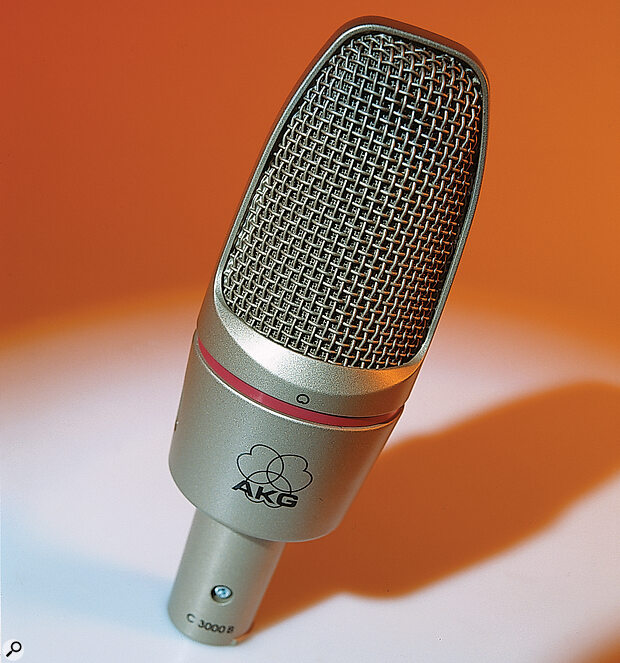 The model number might lead you to believe the C3000B is a variant of the C3000, but it has a totally different capsule and is designed to produce a tonal response that is quite different.

AKG's existing C3000 is a conventional capacitor microphone, but although the new C3000B is similar in name and in some aspects of the housing design, it's really a completely new product. The B at the end of the model number indicates that this microphone uses AKG's newly developed back-electret technology for its one-inch diaphragm, where the C3000 employs a conventional capacitor design with a somewhat different tonal character.

The C3000B's large-diaphragm capsule has a fixed-pattern cardioid response, and there are a couple of simple but practical features that make it suitable for live as well as studio use. For example, the very end of the housing is cast with a raised flange to prevent the mic from sliding out of the included spider shockmount when inverted. The newly 'rounded out' basket is also very strong and comprises a coarse outer layer teamed with a finer inner layer. This not only protects the capsule from damage, but also screens out electromagnetic interference. Sadly, there's no carry-case included with the mic to protect it from damage when it's not in use.

Back-electret mics require very high-impedance electronics, and AKG have coated the entire preamp with a specially formulated insulating varnish, which should improve reliability in humid environments. Quality components are used throughout, many of them manufactured by SMD, and an improved shockmounting system has been employed to reduce handling noise in live situations. The XLR output pins are gold-plated to inhibit corrosion, and the two selector switches (low cut and 10dB pad) are well recessed to avoid the risk of accidental operation. The attenuator comes before the preamp, allowing a real 10dB increase in the maximum SPL that can be handled.

Like most large-diaphragm mics, the C3000B isn't designed to be ruthlessly honest, but rather to sound good. The C3000B exhibits a wider, smoother presence peak than the C3000and a slight high-mid dip which can tame vocal harshness. Overall, the response extends from 20Hz to 20kHz, though because of the presence tailoring, this isn't flat. Any phantom-powering voltage between 9 and 52 Volts can be used with this mic, so a battery-powered system should be fine for location work — AKG offer their B18 battery supply as an optional accessory. It should be noted, however, that both the dynamic range and noise performance will suffer slightly if phantom-power voltages of less than 48V are used.

In terms of specifications, the mic has a good sensitivity of 25mV/Pa and its electrical impedance is 200(omega). The high-pass filter has a cut-off frequency of 75Hz to compensate for proximity effect and the equivalent input noise is a respectable 25dB unweighted (14dB A-wtd). This translates into an 80dB signal-to-noise ratio for sound levels of 1Pa, again A-wtd, and at the maximum SPL of 140dB (150 with the pad switched in), the THD is just 0.5%. The dynamic range is quoted as being 126dB, again A-wtd.

Figures can tell you a lot about a mic, but they don't give you more than the most general hint as to how it will actually sound. I feel this mic is less brittle-sounding than the C3000, but it still has a very open, spacious high end that complements its smooth, full mid-range nicely. Compared with my Rode NT1, which I still think is a bargain amongst low-cost capacitor mics, I found the C3000B to be slightly more sensitive and just a little brighter. Of course one person's 'brighter' is another person's 'less warm', but I feel AKG have struck a good tonal balance here.

No mic can be ideal for all applications, but the C3000B should be a good choice for those who can afford only one or two good mics for all their vocal and acoustic instrument recording. Unfortunately, the C3000B is noticeably more expensive than the C3000 (at its current street price); in terms of cost, it sits somewhere between the C3000 and the desirable AKG Solidtube. While this means that AKG now have a mic for every budget, it also means that you are left with a difficult choice to make!

A very nice new mic from AKG, but the surface similarities with the original C3000 could be confusing.