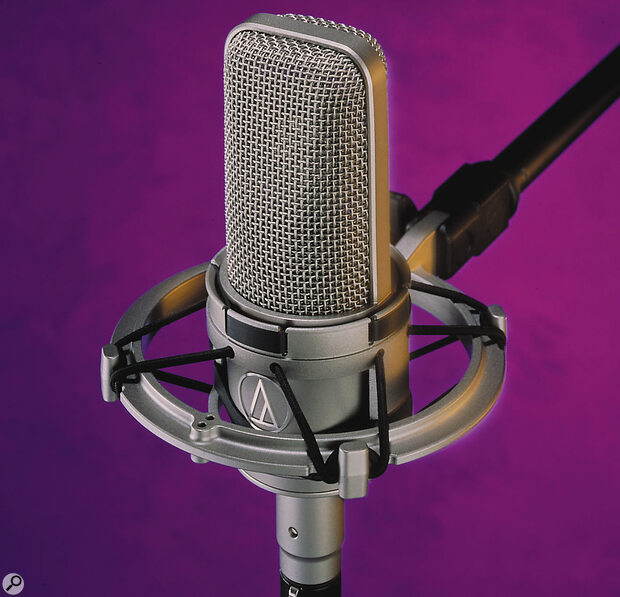 Although it has an exceptionally low‑mass diaphragm, just two microns thick, the AT4047/SV is still remarkably robust.

At first glance, the new Audio Technica AT4047/SV looks just like their AT4033 finished in satin silver rather than black, but inside the housing it is a completely different story. The AT4047/SV employs an externally polarised large‑diaphragm capsule, making it a true capacitor mic, whereas the AT4033 is a back‑electret design. It also boasts a rather unusual design feature: where most large‑diaphragm mics use mylar film approaching 10 microns in thickness, with a few as thin as three microns, Audio Technica have developed vapour‑deposited gold film which is only two microns thick, specifically for the dual diaphragms of the AT4047SV capsule. The purpose of reducing the diaphragm's thickness is to reduce the mass of the moving parts and hence improve the HF response. A five‑stage artificial ageing test is used to try to keep the long‑term characteristics of the mic stable.

Though the pickup pattern is fixed at cardioid, the dual‑diaphragm structure is used to improve the distortion at very high sound‑pressure levels, and according to the spec sheet (I've nothing this loud to test it with!), the mic can handle 149dB without a pad, or a staggering 159dB with the pad switched in. The frequency response extends from 20Hz to 18kHz, with a very slight presence lift around 6kHz. After all the talk about lightweight diaphragms, 18kHz may not seem a very impressive HF response, but the HF roll‑off beyond 18kHz is quite gentle and there's still plenty going on above 20kHz. The mic is also reasonably sensitive, at almost 18mV per Pascal.

A new suspension system has been designed to isolate the capsule from as much external vibration as possible, but the biggest clue to the character of this mic is the model number, which invites comparisons with the highly respected vintage Neumann U47. In fact the AT4047/SV is claimed to provide the sonic characteristics of early FET studio‑microphone designs, and it has a transformer‑coupled output stage to help duplicate the tonal character of that era.

The AT4047/SV is a good choice of microphone for applications where you want to add authority and a touch of warmth to a voice without destroying its natural character.

Small, recessed slide switches operate a low‑cut filter at 80Hz and the 10dB pad. The shockmount (model AT8449/SV), a very nice metal frame, comes as standard and the mic itself arrives in a case made from practical foam‑lined vinyl, though there isn't room inside to include the shockmount with the mic. For reliability of connection, the mic's balanced XLR output has gold‑plated pins, and the capsule is protected by a double mesh wire screen.

One aspect of this mic that isn't vintage is its noise performance. With a claimed self‑noise of 9dB SPL (A‑weighted), the dynamic range of the AT4047/SV is an impressive 140dB — though you would need a very loud sound source to take full advantage of this! In all respects, the technical performance of this microphone equals or exceeds what is expected of a good‑quality large‑diaphragm model, but the technical performance is only half the story. What really counts is the way the mic sounds in real‑life studio conditions.

Despite the fact that the AT4047/SV is a brand‑new microphone, it sounds more like the AT4033 than I'd expected it to. Further experimentation revealed a slightly more rounded top end (though it's not in any way dull), and perhaps a lesser impression of deep bass, but it still has the AT family sound. This 'rounded' characteristic is probably what Audio Technica mean when they say they're going after the sound of vintage FET mics, but comparisons aside, the AT4047/SV is a very nice‑sounding vocal microphone. I also used it for a spoken word session and was pleased with the result: the sound, while gently flattering, came across as natural and lifelike.

The AT4047/SV is a good choice of microphone for applications where you want to add authority and a touch of warmth to a voice without destroying its natural character. It doesn't modify the sound nearly as much as most of the tube mics I've tried, and it seems to work well on just about any voice type. I prefer it to the AT4033, which I also like very much, but if you already own a 4033, the difference between the two mics may be too small to convince you of the need to upgrade.

A very classy‑sounding microphone that is tonally similar to the AT4033, but with a slightly rounder, warmer sound.