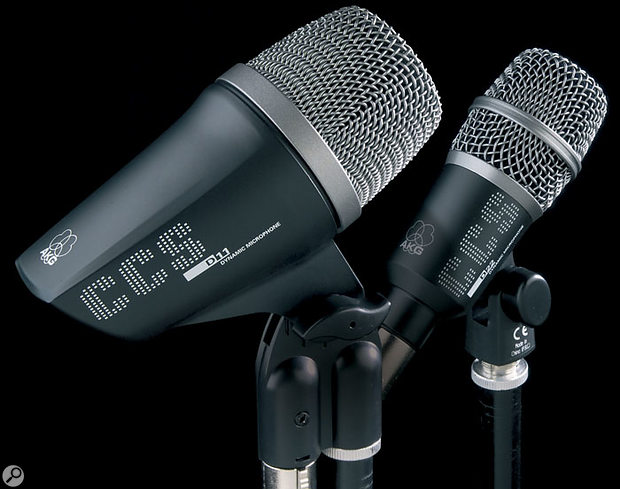 Have you ever seen some famous actor in the flesh and been surprised at how much smaller they look than they do on television or in the cinema? It's a bit like that with the AKG D22 instrument mic. Intended for applications such as tom miking, percussion, guitar amps and some wind instruments, the D22 is a surprisingly compact dynamic cardioid microphone clearly designed to get in 'under the radar' of flying drum sticks! Without the XLR plugged in, the mic's body is barely longer than its basket, and a built-in swivel stand-adaptor further helps maintain a low profile. Even better, a plastic clip is included that should slot onto the rim of most types of tom, enabling the mic to be mounted above a drum without the need for a separate stand. A five-metre AKG-branded cable also comes as part of the package, and everything comes stored in a rigid, translucent plastic case with positive-acting snap fasteners.

The D22's technical specification is as simple as the mic itself, which has no switches or pads to complicate things. Its frequency range extends from 60Hz to 18kHz, while sensitivity is 2.5mV/Pa, but no frequency curve is provided in the brief manual and there's no clue as to how many dBs 'down' the mic is at the specified limits. Clearly, this is one microphone that will have to be evaluated almost entirely subjectively.

While the D22 is laudably compact, plugging in a standard XLR cable effectively doubles its length, as I mentioned above. While I wouldn't want the designers to use a non–standard connector or a fixed cable, I still can't see why mics of this type can't be designed with their XLR socket at an angle, to keep the cable connector below the line of fire when the mic is fixed to a drum rim and angled down towards the head. Having said that, even though the D22 is an inexpensive mic, it is very nicely engineered, with a heavy cast body and a very tough single–layer basket lined with acoustic foam — so it should safely withstand a few whacks! As you'd expect, the capsule is internally shock–mounted, although when I removed the basket to investigate I found the resilient mounting stiffer than I'd expected. The swivel mechanism has a fairly small thumbscrew, for tightening purposes, but the mic showed no tendency to droop in normal operation.

The D22 comes over as a fairly honest, flat dynamic mic and doesn't even sound out of place handling vocals. It does a workmanlike job of miking electric guitars, drums and hand percussion, with a smooth, even tonal balance that responds well to gentle EQ. In tight situations, its small size is also beneficial, especially around a drum kit. Given that it retails at well below the cost of more commonly used microphones in this market sector, it performs extremely solidly on drums, percussion and guitar amps.

Cardioid: Literally, 'heart-shaped'. When applied to microphone pickup patterns (ie. the patterns in which particular mics pick up sound), the bottom bit of the 'heart' points forward, while the cleft in the middle at the top represents the direction of lowest sensitivity and points to the rear of the mic.

Dynamic Microphone: Microphone design based on the principle that a wire coil suspended in a magnetic field will generate a voltage when the coil is moved. If that coil (called the voice coil) is attached to the diaphragm of a microphone, a proportional voltage will be created when sound causes the diphragm to move in and out. Dynamic mics are generally rugged, but with limited sensitivity and frequency response, due to the mass of the coil/diaphragm assembly restricting its speed of movement.

The D11 is styled in a similar way to the D11 but is significantly larger, with an extended bass end that allows it to be used with kick drums and bass guitars, as well as all the sources that the D22 is designed to handle. Again there's a swivel mount, but this time the XLR connector is built into the plastic moulded swivelling section, so the effective mic length isn't altered by plugging in a cable. A cardioid design, the D11 has a frequency response that extends from 20Hz to 20kHz — although, once more, no frequency plot was included in the documentation. I found this especially frustrating, as kick mics tend to have 'interesting' response plots that are more to do with musicality than with accuracy, and I would have liked to see what the designers have chosen to do.

A similar type of construction to the D22 has been employed, although the mic capsule itself is clearly very different and the basket is almost twice the diameter. There's no drum-rim clip with this mic, as it's probably a bit on the heavy side, but it comes with the same cable and plastic storage case as the D22. One way the cost has been kept down in both cases is to manufacture these microphones in Taiwan, although the design is all original AKG and done in Vienna.

As expected, the slightly more expensive D11 has a very different sound, which might best be described as 'scooped', no doubt because it is tuned to augment the upper–mid thwack and the low thump of a kick drum, while suppressing the somewhat boxy frequencies that lie between. Because of this coloration it works well on kick drums and larger toms, and can also suit certain bass guitar amps, but by the same token it is likely to be less well suited to those tasks that require the mic to deliver a more accurate representation of the instrument. However, at around half the cost of the better established AKG D112, the D11 is very attractive for smaller bands who want to get close to the classic 'weighty but defined' AKG kick sound.

When you take into account the price, build quality and performance of these two microphones, there's no getting away from the fact that they do a very solid job. You even get a mic cable, which is a worthwhile bonus. For serious studio work, I'd probably still pay the extra for a D112 for kick miking, but for live work or applications where the budget is tight, these mics deliver better than adequate results and seem rugged enough to keep doing so for many years to come.

While not top-drawer mics, these models give near-pro performance at a near-budget price. The D22 is a great little all-rounder, while the D11 is probably best suited to kick drums and bass amps.

What Do Mastering Engineers Actually Do?
4 days 15 hours ago.