Headphones play an important role in the studio, most often for performer monitoring, but they're also useful as a second reference when checking mixes, as noise or distortion usually shows up more distinctly on headphones than over loudspeakers. The AKG K271s are closed phones that sit over the ear of the user, making them well suited to performer monitoring, as they offer a reasonable degree of sound isolation as well as minimising leakage from the phones to nearby microphones. They are fairly conventional dynamic headphones with a wide frequency range that goes from 16Hz to 20kHz, and they are also electrically quite efficient, generating an SPL of 91dB for 1mW of input power. The maximum input power handling is 200mW, so things can get pretty loud in there — a factor worth remembering when you consider that prolonged exposure to high SPLs can cause hearing damage. 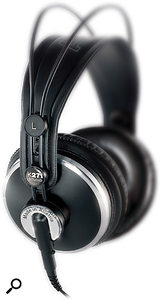 These phones have an impedance of 55Ω, so should be happy running from most mixer phones outlets or dedicated headphone distribution amplifiers. At just 240g, they are not exactly featherweight, but that's pretty good for enclosed phones of this power. A nice touch is that the cable is detachable via a miniature locking XLR connector on the left phone, and three metres of cable are supplied as standard, terminating in a gold-plated, stereo 3.5mm mini-jack with a screw-on quarter-inch jack adaptor.

The headband uses a sprung wire outer frame with a padded vinyl band below it, the latter operating on freely running slides, which makes the phones virtually self-adjusting. I found them to be quite comfortable to wear, and they were also reasonably stable, though a colleague found them less so, which probably means that you still need to match your choice of phones to your head shape to some extent. The padded circular cushions fit snugly over the ear and I found the sound quality to be neutral and revealing enough for qualitative monitoring as well as for performer monitoring. Even the bass end seemed plausibly well-balanced, which is not always the case with studio headphones, no matter what the paper spec tells you. If anything, they have a very slightly pronounced high end when compared to some of my other studio phones, but certainly nothing that could be considered excessive. Acoustic leakage from the phones is minimal, while sound from the outside world is significantly attenuated without being excluded entirely.

While headphone designers can often go on at great length about the technology they employ, as far as the user is concerned headphones are there to do a job and they either do it or they don't. These work more than adequately well both for making quality judgements and for wearing while overdubbing, and they do so without being uncomfortable or allowing an unacceptable level of sound leakage. They are cheaper than many popular studio headphones yet they are engineered to stand up to sensibly heavy-duty use. The replaceable cable is an advantage, as is the now familiar jack adaptor, but, as with any audio transducer, the final product is a compromise between what is possible and what the end user is prepared to pay. In this respect, I think AKG have come up with a good balance at a price most UK project studio owners will find attractive.

The K271's are well-designed, mid-price headphones suitable for both foldback monitoring while recording and evaluating mixes.