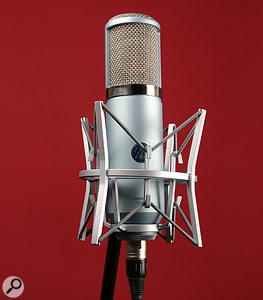 A number of the big‑name mic manufacturers have made the decision to have some of their more affordable products built either partly or wholly in the Far East, and that's the route AKG have taken with their Perception 820 Tube, a multi‑pattern valve microphone.

The design and construction is not what you'd expect from a run‑of‑the‑mill Chinese‑built mic, though: the bodywork is beautifully machined; and the external power supply is a stylish affair with a brushed‑aluminium front panel, rather than the more common, utilitarian steel brick that accompanies many Chinese mics. In combination with AKG's design expertise and stringent quality‑control, I can see no reason why this mic should differ in any significant way from one built in Vienna — other than by being rather more affordable!

In common with other members of AKG's Perception range, the pale‑blue anodising on the bodywork makes it instantly recognisable. The format, though, is fairly conventional, with a simple, cylindrical shape (53mm in diameter and 212mm long) and dual‑layer mesh basket. The 20dB pad and roll‑off (80Hz, 12dB/octave) switches are on the power supply, along with a nine‑way pattern-selector switch, so the mic itself is very streamlined, with just the AKG badge to break the monotony, and to indicate the 'hot' side of the mic when it's used in cardioid mode. Also included in the kit, which comes in a foam‑lined camera case, is a robust elastic‑cradle shockmount, with a metal frame finished in metallic blue to match the mic. A captive locking ring on the mount screws to the base of the mic.

The capsule is based around a pair of one‑inch-diameter, gold‑sputtered, back‑to‑back diaphragms. These are true externally powered capacitor capsules, rather than back‑electrets (not that back‑electrets can't be made to perform equally well). Whereas many vintage mics rely on long‑obsolete tubes that are now virtually impossible to get hold of for less than the price of a family car, the Perception 820 uses what is probably the most commonly available preamp tube on the planet, the ECC83 (or 12AX7, as our US cousins call it) dual triode. By combining the outputs of the two capsules in different proportions, the pickup pattern can be made to cover the entire range, from omni, via several widths of cardioid, through to figure‑of‑eight. The aforementioned rotary switch on the PSU is used to change the patterns, and connection between the mic and PSU is via an included seven‑pin XLR cable. A ground‑lift switch is fitted to help prevent ground-loop problems, and the mains voltage can be switched between 110V and 230V AC, 50/60Hz.

The spec sheet and accompanying response curve show the mic to have a creditably flat response up to around 2kHz, above which there's a presence lift that rises to a maximum of around 5dB above the nominal level, and changes shape and position slightly depending on what pickup pattern is selected. In omni and cardioid modes, it is up at around 10kHz, giving more of an airy quality to the sound, while in figure‑of‑eight mode it is at its highest around 5kHz. In all modes, the low end is well extended, with the omni mode being flat to below 30Hz. An open-circuit sensitivity of 20mV/Pa is quoted along with a self noise of 16dB (A-weighted), both figures being typical for this type of microphone. The maximum SPL is 135dB, or 155dB with the 20dB pad engaged, so few sources will intimidate this microphone. On paper, at least, the Perception 820 seems well‑equipped to meet all the needs of a typical home studio in recording vocals, acoustic guitars, percussion and guitar amplifiers.

So what does it actually sound like? Overall, the Perception 820 has the characteristic warmth of a typical tube mic, augmented by its presence bump — which works well on some sources, but may be less flattering on others. As a point of comparison for the review, I rigged up the 820 alongside AKG's rather more esoteric C12VR model, and we've placed some audio files up on the SOS web site so that you can hear things for yourself (/sos/aug10/articles/akgperception820audio.htm).

I found the Perception a little less dense‑sounding at the low end, and perhaps a hint 'shouty' in the mid-range when used on vocals, though it responded favourably to a gentle dip at vocal presence frequencies, which made the overall effect smoother and more natural. It was the same story on acoustic guitar — there was plenty of body and presence, but also a hint of mid‑range emphasis that benefited from some 2kHz cut. There was less audible difference on percussion, where the presence bumps helped to bring out articulation in the sound, suggesting that this mic will perform well in any application where clarity is of paramount importance.

Although the bulk of our testing was carried out in cardioid mode, the tonality stayed reasonably consistent across the pattern range, with both the omni and figure‑of‑eight variants sounding more open than the cardioid setting — though, as is usual with multi‑pattern, large‑diaphragm mics, not quite as transparent as a small‑diaphragm, dedicated omni model. The presence peak certainly helps lift vocals out of a mix if they lack projection, but in our tests it tended to make close-miked guitar amps sound somewhat aggressive, unless an off-axis placement was employed.

Having various widths of cardioid pattern available is also very useful in the studio, as the mic's 'dead zone' changes depending on the setting. For example, in wide cardioid mode, the mic is quite insensitive at the rear, whereas in hypercardioid mode the dead spot is around 45 degrees off the rear axis. I also find that wide cardioid patterns tend to sound more natural than tighter ones, room acoustics permitting.

In addition to auditioning the same sound sources with a C12VR, I tried the Perception 820 alongside my own Rode K2 tube mic, and found it to have quite a similar sound, aside from the 820's more assertive presence lift. The Perception 820 certainly proved itself a capable all‑rounder within its price range, and if you're prepared to use a little EQ when needed, it's capable of good results on acoustic guitar and percussion. It scored well in our spoken-word tests, too.

Other than the caveat concerning the response shaping, which sounds to me like a slight 2kHz bump, the Perception 820 Tube is a very capable and versatile microphone. Admittedly it's not the best mic I've heard on a guitar cabinet, unless you specifically want to capture a raw, edgy sound, but with careful placement and judicious use of EQ it is capable of a number of different tonal shadings, so don't rule it out. Given its reasonable price and the fact that you get a sturdy shockmount thrown in, the Perception 820 ticks all the right boxes for the project studio owner who wants a tube mic that can turn its hand to just about anything, and the build quality is hard to fault.

Obvious alternatives in this price range include Rode's K2, SE's Z5600A, the Golden Age Project TC1 and the Newmann Retro MkII. MXL's multi-pattern Revelation is a little pricier, but if you need only a fixed cardioid pattern, their Genesis model is well worth a look.

The Perception 820 is a high-quality tube mic that can be used with just about any source, provided that you are prepared to find the right placement or use a little EQ.