If you enjoy hitting things with sticks but balk at the cost of percussion controllers, this no-nonsense device could be just what you've been waiting for. 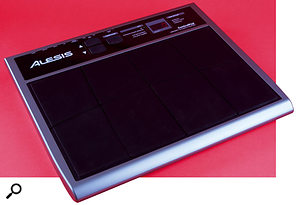 Photo: Mike CameronThe Alesis Control Pad is a compact and affordable MIDI and USB percussion controller, equipped with eight velocity-sensitive pads plus sockets for connecting up to four additional trigger devices. Two of these sockets are intended for footswitches, to act as bass drum and hi-hat pedals. The others can be used to attach pad and cymbal triggers (which Alesis sell separately) or any other trigger device that connects via a quarter-inch jack. A further socket allows a dual footswitch to be attached (again, via a quarter-inch jack), and this can be used to incrementally step through programs.

A pair of MIDI sockets (one In, one Out) allows connection to other MIDI hardware, and there's a USB socket for connecting to a host computer. When connected via USB, no MIDI interface is required; the Control Pad simply appears as a MIDI input device in your sequencing software (misleadingly labelled 'USB Audio Device' under Windows XP, although it should be pointed out that this is not Alesis's fault).

A USB connection can also be used to power the device (providing that sufficient current is available), although a 6V mains adaptor is provided for powering the unit without the need for a computer. The Control Pad has its own on/off switch on the back panel.

If you're using it with a computer, installing the Control Pad is painless. No software drivers are required and the unit can justifiably be descridbed as a 'plug and play' device. The bundled BFD Lite software (see the ' BFD Lite ' box) comes with a straightforward installer program, and it only takes a couple of minutes for the program and sample content to be copied on to your hard disk.

The Control Pad uses up relatively little desk space, measuring just 435mm by 350mm. If desktop use isn't for you, an optional bracket can be fitted to the bottom of the unit, allowing it to be mounted on a tom or cymbal stand. Alternatively, a snare stand might fit the bill.

The Control Pad's front panel is simple enough. There are three large, rubbery buttons: a Function button to switch between the device's different routines, and 'up' and 'down' buttons to incrementally adjust parameter values. Alongside these are a three-digit LED display and a few LEDs to indicate which function has been selected for editing.

Kits are a key concept in the Control Pad's design. A Kit is a lot like a synthesizer patch or a sampler program: it's a collection of parameter values and settings that can be stored and recalled as required.

There are 21 slots for storing Kits, eight of which are used up by presets, although these can be modified and overwritten. The parameters stored in Kits include the MIDI note numbers that are assigned to the different pads (and external trigger devices, if any are attached), along with the MIDI channels on which data will be sent.

Program Change data can also be sent by the Control Pad, and each Kit can have a unique Program Change message associated with it. In practice, this means that you can arrange to have your software or hardware sound source switch programs automatically when you switch Kits on the Control Pad.

Editing Kits is simple and straightforward. For example, to change a pad's MIDI channel you press the Function button twice (a red LED labelled 'Pad MIDI channel' comes on), hit the desired pad, then press either the up or down arrow buttons until the appropriate MIDI channel number is shown in the LED display.

To change the MIDI note number assigned to a pad, the procedure is almost the same. Press the Function button three times (a red LED marked 'Pad MIDI channel' comes on), hit the desired pad (its current MIDI note number is shown in the LED display) then use the up and down arrow buttons to change to a new MIDI note number. The pad updates immediately, so you can find a new sound 'by ear' even if you don't know its MIDI note number off the top of your head.

Going A Bundle With BFD Lite 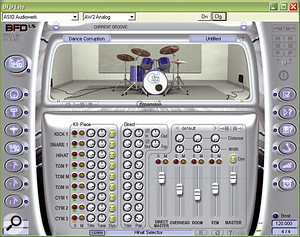 Photo: Mike Cameron Bundled free with the Control Pad is a cut-down, limited version of FXpansion's formidable BFD drum sample library player (reviewed in SOS February 2005). BFD Lite installs from a single DVD-ROM and includes 12 nicely produced, good-sounding drum kits. BFD Lite lacks many of the features of its full-grown counterpart; it has a stereo output only, and its sound library seems not to be expandable. It's quite playable, but for serious work you'll probably want the full version. An upgrade path is apparently available: interested parties should email info@fxpansion.com for details.

Global parameters are settings that affect the overall performance of the Control Pad regardless of the Kit currently in use. They include Sensitivity, Velocity Curve and Threshold.

The Sensitivity parameter does pretty much what you'd expect. Higher Sensitivity settings make a pad more sensitive, so that a lighter touch will trigger sounds and less force is required to reach maximum velocity (ie. to send a MIDI note with a velocity value of 127). Despite being a 'Global' parameter, Sensitivity can be adjusted on a pad-by-pad basis, allowing you to fine tune the controller's performance to suit your playing style, or to compensate for your technical bad habits!

Changing a pad's Sensitivity is no more complicated than adjusting any other parameter. Press the Function button four times (a red LED labelled 'Sensitivity' comes on), hit the desired pad (its current Sensitivity value is displayed), and use the up and down buttons to adjust the setting as required, on a scale from zero to 20.

The manual warns against the possibility of crosstalk (where hitting one pad may inadvertently trigger an adjacent pad) but I didn't have any trouble with this in the course of my testing. I found the default setting of 20 suited me well, although heavier hitters may want to experiment with lower settings.

Velocity Curve is another Global parameter that can nonetheless be adjusted independently for each pad. There are four preset Velocity Curves available, which are used to fine-tune the responsiveness of a pad by altering the ratio between physical input velocity (literally, how hard you hit the thing) and MIDI output velocity (a value between zero and 127).

The Offset mode is essentially the same as Linear, except that all MIDI velocities have a value of 49 added to them. In practice, this means that softer hits will produce velocities in the range of 50 to 127, while harder hits result in consistent 127s. Finally, Constant Curve could have been called 'Sensitivity Off', because when it's selected, all hits (or at least all of those that are powerful enough to trigger the pad) result in a MIDI velocity of 127.

All four of these Velocity Curve settings are potentially useful. Exactly how you use them will depend on your playing style, as well as the types of sound source you're triggering. Certainly it's worth experimenting a bit to get a feel for the possibilities.

The Threshold parameter can be adjusted to prevent any unwanted triggering. Threshold can also be adjusted on a per-pad basis, in much the same way as the parameters I've already discussed. Threshold values range from one to 126, with one being the default setting. As the value increases, progressively harder hits are required to trigger sounds. With settings above 65, I was finding it increasingly difficult to trigger sounds at all. I don't think I would ever need the extra headroom — although it might conceivably come in handy if you were working with external trigger devices.

In addition to the straightforward functions described above, the Control Pad has three other handy 'utility' functions that are worth knowing about.

First, holding down the up and down buttons simultaneously for two seconds or more causes the unit to send an 'All Notes Off' message on all MIDI channels; very handy if you ever need to stop a wayward sound module from running out of control.

Briefly pressing the up and down buttons simultaneously while editing any Kit parameter will automatically set that parameter back to its default setting, something that can save you quite a lot of button-pushes.

Finally, holding down the up and down buttons while powering up the unit triggers a full 'factory reset', returning to your Control Pad to its original condition, including overwriting any user-edited Kits and reinstating the presets.

Another useful feature is the ability to perform a MIDI SysEx dump to your sequencer, by holding down the Function button and the up and down buttons for two seconds. Dumped data can be restored to the Control Pad by simply 'playing' it back in from the sequencer.

I should say first that I'm neither a trained drummer nor a percussionist, and my impressions of the Control Pad's playability are therefore those of an untutored layman.

The Control Pad's rear panel features inputs for five additional controls, as well as MIDI I/O and a USB port.Photo: Mike CameronThat said, I found the Control Pad very enjoyable to play. Its eight pads responded well to drumsticks, with just enough bounce and rebound to play 'drags' and other similar phrases that would be all-but impossible on a controller keyboard.

The Control Pad has clearly been designed with sticks in mind, but there's no reason why it couldn't be played with beaters of other kinds. Although the pads are just about sensitive enough for patterns to be tapped out with the fingertips, you won't really get the best out of the unit this way. Sticks are recommended.

Although the Control Pad is small and reasonably lightweight, it's housed in a very sturdy-looking charcoal-grey plastic case. The clear plastic of the top panel display looks reasonably durable, but even so, it probably wouldn't take kindly to a heavy whack with a drumstick.

I haven't tested this possibility in anger (as a reviewer one aims not to send products back to the distributor in pieces!) and it's possible that I'm underestimating the Control Pad's resilience. It's largely academic though, since it's easy enough (even for a technically inept player like me) to keep the sticks on target and avoid doing any damage.

The Control Pad's manual claims that the unit offers 'the functionality of a full-size electronic drum kit'. Although this is overstating the case somewhat, it certainly does provide a lot for the money.

Drummers and percussionists who are looking for ways to expand their kit should take note. The combination of a Control Pad plus either a laptop or (and perhaps more attractive for live performance) a self-contained sound module or sampler opens up an enormous range of possibilities at a relatively low cost. Adding the optional pad, cymbal and footswitch triggers expands the device's potential still further.

Non-drummers like myself might find the Control Pad a more playable and expressive alternative to the standard MIDI controller keyboard for programming drum and percussion sequences. At £180 it costs barely more than a budget keyboard, and shouldn't break the bank if you have an urge to experiment.

There really doesn't seem to be much else on the market at the moment to compete with the Control Pad. Roland's SPD20 combines a similar control surface with a built-in sound module offering hundreds of sounds, and consequently costs a couple of hundred pounds more. If you're happy to tap out rhythms with your fingers instead of sticks, the Akai MPD16, M-Audio Trigger Finger or Korg Pad Kontrol may be worth considering.

An affordable, playable percussion controller, with few real competitors in the current market. Drummers and non-drummers alike can expand their horizons without breaking the bank.