Brauner's latest offering is a solid-state mic that claims to provide the same sonic character as their state-of-the-art valve designs, at a lower price. Is it too good to be true? 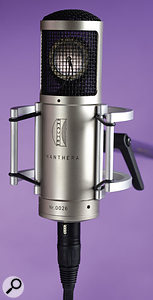 Brauner Microphones is a German boutique manufacturer set up in 1995 by Dirk Brauner. Before making microphones, Dirk ran a business maintaining professional audio equipment (especially valve equipment) and often built custom valve-based products. However, Dirk always had a fascination with microphones and work on his first commercial product, the VM1 tube mic, can be traced back to 1993. Initially, this microphone was developed purely for personal use, but when others heard it they wanted one too, and the Brauner microphone quickly became hot property, as its reputation spread entirely by word of mouth.

Following the initial hand-built batch of VM1s, the Brauner Microphone company was founded, and over the last decade their range has expanded to include the VMA and VMX models, the Valvet and the Phantom — the last two being reviewed in the March 2004 and September 2002 issues of Sound On Sound, respectively. Brauner mics are built entirely in Germany, with typically Germanic engineering. They all feel fantastically strong and reliable, and are clearly built to last a lifetime — which is just as well, because most are scarily expensive! But then you do get what you pay for, both materially and sonically, and I've not found a Brauner mic yet that has failed to impress.

The newest addition to the family is the Phanthera, launched at this year's Pro Light & Sound exhibition in Frankfurt, and it shares the family's physical characteristics. It is a fixed-pattern, externally-biased (true capacitor), large-diaphragm cardioid mic, with a solid-state, FET-based impedance converter. So it sits alongside the Phantom 'C' model, sharing the same case design, and supported within the same clever double-C-bracket suspension. The Phanthera's claim to individuality is in its blend of the Phantom's solid-state convenience and the VMA's valve-based sonic characteristics.

The microphone measures roughly 170mm in length. The body is almost a straight cylinder, which measures 50mm in diameter at its widest points. A male XLR carries the output from the bottom of the body and there are no switches anywhere — not even a 10dB pad. Like all Brauner mics, the Phanthera has its serial number etched at the base of the mic, below the Brauner logo and model name, which also serve to identify the front axis of the mic. The casing has a plain nickel-satin finish, with a double-layer, black, wire-mesh grille around the centre-terminated capsule.

The clever suspension cradle consists of pairs of inner and outer C-shaped arms. Each pair is linked to its counterpart by three metal rods, and the two assemblies are then coupled via six rubber O-rings located in grooves on the metal rods. These O-rings provide the mechanical decoupling, as well as providing the grip for the microphone body, which slips tightly into the inner C-arms. It is elegant and simple, but highly effective, and is now a thoroughly proven design.

At the rear of the outer C-bracket is the conventional stand-adaptor threaded socket (5/8 inch with a 3/8-inch insert), but even this is engineered better than most, with a long lever arm to allow the pivot point to be secured reliably.

The microphone's specifications include a frequency response of 20Hz to 22kHz, with self-noise of 11dBA and a maximum SPL of 142dB (for 0.3 percent THD). With such headroom, I can see why there is no need for a 10dB pad switch — only close miking of snare drums is likely to overload the Phanthera! Output sensitivity is a healthy 33mV/Pa and the mic requires standard 48V phantom power, from which it draws a modest 4mA. In comparison to the Phantom 'C', the output from the Phanthera is about 1.5dB hotter but about 3dB noisier (the class leaders are typically around 7dBA).

The mic is supplied in a well-made aluminium carry case with unusually deep protective foam padding, and comes complete with a five-metre Vovox 'Link Direct S' mic cable. It should also have a user's manual, but sadly that had gone missing from the review model.

Vovox cables are constructed in an unusual way, which is claimed to enhance the sound quality, and clearly Dirk Brauner is sufficiently impressed to include them with all Brauner microphones. The cable is said to be directional, and a 'flag' label denotes the output end. Of course, this isn't really an issue with an XLR cable, since you can only connect it one way anyway, but the flag becomes important with Vovox guitar leads.

I've always liked the Brauner sound. Dirk Brauner has managed to make a range of microphones that all sound larger than life in a very flattering way, and the Phanthera is no exception. Although obviously not a valve microphone, it does have something of the richness of tone and intimacy that you would expect from that technology, yet without the almost inherent noise (and heat). The Phantom was much the same in its tonal attributes, but although I wasn't able to make a direct comparison the Phanthera sounds to me a little more precise and sharper — 'crisper' is probably a better description.

The polar response appears to be a broad cardioid: you can move up or down and across the front axis quite a long way without sounding 'off mic', which is useful when recording spoken word. There is a well-defined rear null, but the mic remains surprisingly sensitive even behind the 90-/270-degree line, so you will need to work in a properly controlled acoustic space with this mic. The internal mesh grille seems able to cope with plosives well if a reasonable working distance is maintained — more than about eight inches — but for closer vocal work a proper pop screen would be essential.

As with all Brauner mics, there is a substantial proximity effect, which is tailored to flatter voices over the typical working range. The shockmount is reasonably effective, but you will still need to exercise caution with the placement of the mic stand. Direct mechanical contact with the stand translates as a clearly audible deep bass rumble, such is the sensitive and well-extended bottom end of the mic.

All that said, it sounds large, smooth, flattering and very natural in a 'modernised vintage' kind of way. It's the sort of sound that is instantly flattering to everyone's voice, and it could quickly become a first-choice mic. Everyone will fall in love with its sound character: it happened for me and everyone else that I encouraged to listen to it!

The promotional material suggests that the Phanthera is ideally suited to vocal recording and voice-overs, and I can see why this would be a popular role. It sounds natural and clear, yet without undue emphasis on the mechanical sounds — the sibilants and fricatives — while also providing a full, almost voluptuous sound.

The prospective purchaser is faced with a difficult buying decision, which highlights the inherent nature of incremental gains at the high end of pro-audio. With a list price of about £1100 in the UK, the Phanthera sits roughly alongside the original Phantom C, but it offers a different tonal character that will appeal to a different subset of users. The Anniversary Edition Phantom provides a similar musical experience, but without some of the valve-like flavour of the Phanthera — but then it is also cheaper and clearly offers the best value for money in the Brauner range.

However, if the only arbiter of choice is absolute quality, the VM1 or VMA models would have to lead the way, without question... that is, until you hear the Phanthera. You are then faced with the choice between a true state-of-the-art valve mic and a solid-state equivalent that appears to give almost nothing away sonically and which also gains significantly in convenience, longevity and price. Tempting... so tempting!

The Phanthera is an impressive mic that sounds far more expensive than its retail price (around £1100) implies, and it can hold its head up high in the company of mics that cost far more. But there are worthy competitors in the same price bracket, such as the Blue Blueberry, Brauner's own Phantom 'C', Microtech Gefell's UMT70S, the Josephson E22S, and the ever popular Neumann TLM127.

A new, solid-state, large-diaphragm, cardioid capacitor mic that has been designed to deliver the sonic characteristics of Brauner's flagship VMA model, but with more convenience and a lower price. It should be a serious competitor for mics that cost much more.