Digital desks are all well and good, but analogue consoles still have their place, especially for smaller gigs. We round up some of the best current options at a range of different prices.

As you have probably noticed, digital mixers are all the rage at the moment, and it seems not a month goes by without one of the big names in live-sound mixing announcing some new all-singing, all-dancing, iPad-controllable console with audio networking and a built-in espresso machine. In many cases, these new consoles represent a ‘trickling down’ of technology, from the seriously high-end pro touring market to affordable desks intended for gigging bands and small venues. As such, they open up a range of possibilities for the smaller fish of the live-sound world, such as the use of digital snakes (no more cumbersome multicores!) and personal monitor mixing systems (“Sort your own monitor mix out, you cloth-eared ingrate!”).

Such features are nice to have, but we don’t always want or need all the bells and whistles that digital provides. In fact, for smaller gigs, where an arsenal of graphic EQs, reverbs, delay lines and matrix outputs might be considered overkill, I’d often rather have fewer things to distract me from my main job of making sure everything is audible and sounding good.

Another potential pitfall of digital mixing is that it lacks the familiarity of analogue. A decent engineer should be able to use any analogue mixer straight away, and even discern its features and capabilities just by looking at it, but the same cannot be said of digital consoles, which often have important features buried somewhere three layers down into some arcane menu system. So, again, if it’s likely that people other than myself are going to be operating the desk, I’ll give good old-fashioned analogue some serious consideration.

For such occasions, I personally tend to stick with my trusty old Soundcraft FX16. It’s a rugged little beast, and has a surprisingly good feature set for its size: 16 preamps (none of that ‘make up the channel count with line-only inputs’ nonsense), four auxes, built-in effects and direct outs per channel (useful in the studio). That specific model has been discontinued, but happily there’s a MkII version that ticks all the same boxes, and a few more: www.soundcraft.com/products/product.aspx?pid=150. 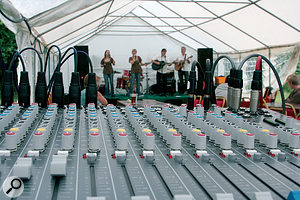 Another established name in this market is Allen & Heath, whose MixWizard range is now in its fourth incarnation. I’ve used quite a few MixWizards live, and I hold them in similarly high regard as the Soundcraft in terms of reliability and ease of use. They are a little pricier than the Soundcraft, though they do have a few very welcome extras, such as four-band EQs and (on the newer models) a built-in USB interface. The WZ4 14:4:2 model we reviewed recently (http://sosm.ag/jul14-wz4) also has some very interesting routing options that make it suitable for both FOH and monitor-mixing duties.

There are, of course, cheaper options available — most obviously, those from the Behringer stable. The Xenyx models are particularly affordable, though special mention should be made of the (only slightly) more upmarket UFX 1604 (www.behringer.com/EN/Products/UFX1604.aspx). As well as four-band EQs, long-throw faders and a dual-effects engine, this remarkably well-equipped mixer has a 16-input Firewire/USB audio interface built in. What’s more, it can also record all its input channels, plus the stereo mix, directly to a USB hard drive, which takes all the pain out of getting multitrack recordings of live shows. 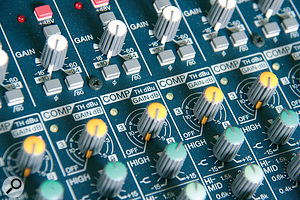 Many of Yamaha’s compact mixers feature simple one-knob compressors.In a similar sort of price range are the Mackie ProFX desks (www.mackie.com/products/profxseries/splash.html). They have short-throw faders, which is a bit of a shame, but they do, as their name suggests, have an effects processor built in, as well as a seven-band graphic EQ and a stereo USB interface. They also have basic one-knob compression on some of their mic inputs, which can be very useful for evening out lead vocals and such.

Yamaha’s MG range is also worthy of consideration (you can read our review of the MGP32X at http://sosm.ag/may14-mgp32x). They, too, feature one-knob compressors, as well as built-in effects. Overall, the MG desks are nice to use, though the dark panels make navigating them a little tricky in low lighting.

A Touch Of Class

There are, of course, some rather more attractive options further up the analogue mixer food chain, like the Venice range from Midas. Though costlier than the aforementioneds, it does have the excellent sonic quality and confidence-inspiring ruggedness that earned the company their formidable reputation. In addition to its ample auxes, inputs and routing options, the Midas consoles are available in either Firewire or USB interfacing versions, for simple multitrack recording to a computer. They are also very colourful, which, as well as making the things look a little more lively than your average desk, also makes them easy to navigate in gig conditions. 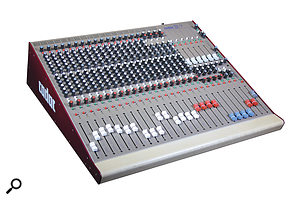 When only the best will do... The Rolls Royce of the compact live analogue mixer market, however — for me, at least — has to be the Cadac Live 1 (http://sosm.ag/jan13-cadac). It’s just one of those desks that’s a joy to stand in front of; the build quality is as tank-like as you could hope for, everything feels solid to use and the top panel is clear and easy to read. Every switch has an LED next to it to show you its status, which is uncommon in small mixers, and also extremely useful — but obviously adds to the cost! There are inputs and outputs galore — six aux sends and returns, two stereo returns, monitor outs, headphone outs and four group outs, in addition to the usual channel ins — so that even the smallest mixer in the range can mix up to 26 inputs.

It has just one foible, however, and that is that all its knobs are upside-down, so that the lowest value on all the knobs is at around the 10 o’clock position, and the highest is at around 2, with half-way being at 6 o’clock. It’s a bit odd at first, but you soon get used to it, and in a way it’s a rather charming quirk.

The downside, as with most really nice things, is the price: while the Soundcraft FX16 II would set you back around £500$800, the 16-channel version of the Cadac is about eight times more expensive. One of these days, though...