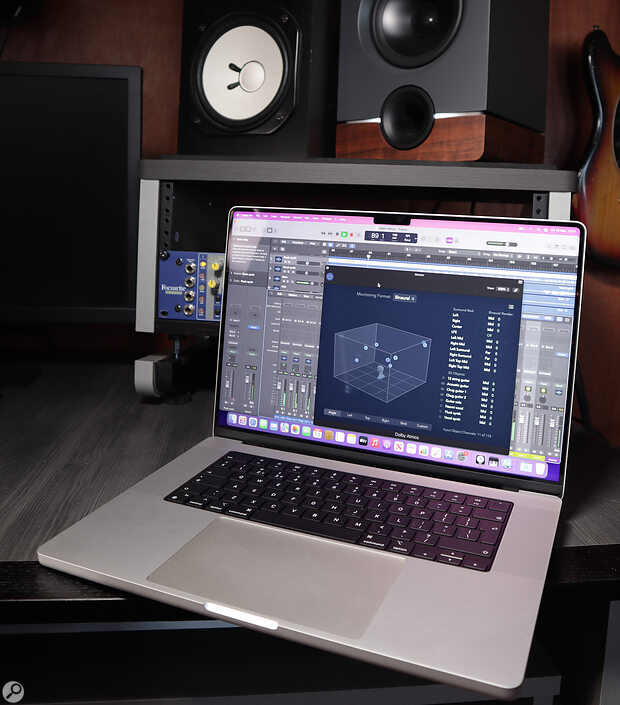 Apple’s most powerful laptop computer ever has been explicitly designed with music in mind.

October 2021 marks the 30th anniversary of Apple’s first notebook computers. The PowerBook 100, 140 and 170 helped set the template for the modern laptop, incorporating now‑cornerstone design features like the palm rest below the keyboard. IBM would refine this approach with the help of German‑born designer Richard Sapper, launching the ThinkPad a year later, and the rest is history.

The latest generation of MacBook Pros are perhaps equally revolutionary, being the first notebooks Apple have designed from the ground up to fully embrace their latest custom silicon. What’s more, nearly every Apple executive featured in the launch presentation emphasised the important role music plays at the company. Apple’s CEO, Tim Cook, even began the keynote by saying the event was about two things: “Macs and music”.

The sleek design of the new MacBook Pro is, as many have remarked, reminiscent of the first ‘Titanium’ PowerBook G4 that debuted in 2001. And as always, the MacBook Pro’s precisely machined bodywork is part of an “advanced thermal system” that makes it possible to achieve sustained performance without fan noise. The 16‑inch model is almost but not quite the same size as the previous Intel MacBook, but at 4.8lb (2.2kg) to the older machine’s 4.3lb (2kg), it’s a little heavier. However, if you want the same features in a slightly lighter and smaller form factor, Apple also offer a new 14‑inch MacBook Pro. This weighs in at 3.5lbs (1.6kg) with a height of 1.55cm and a size of 31.26 x 22.12 cm. And, for the first time, the 14‑inch model can be configured with the same specifications as the larger model.

Apple have a justifiably high reputation when it comes to displays, and there probably aren’t enough superlatives in the English language to describe this one. Built upon and leapfrogging the technology used in both the high‑end Pro Display XDR, and the Liquid Retina XDR display used in the latest 12.9‑inch iPad Pro, it really is stunningly good.

The Pro Display XDR was released in 2019, and uses a 2D backlight system comprising an impressive 576 LEDs with 576 corresponding full‑array local dimming zones, managed by a custom, Apple‑designed timing controller. Apple adapted the technology for the latest 12.9‑inch iPad Pro, resulting in the spectacular Liquid Retina XDR display. However, because the iPad Pro is considerably thinner than the Pro Display XDR, it was necessary to use Mini‑LEDs for the backlight, making it possible to pack over 10,000 of these smaller light sources organised into more than 2500 dimming zones. The new MacBook Pro’s 2D backlight goes further, with 10,216 Mini‑LEDs organised into 2554 local dimming zones, but also has the same Liquid Retina XDR moniker. Liquid means the IPS panel is based on Liquid Crystal Display (LCD) technology, Retina refers to the high pixel density, and XDR is an abbreviation for (Extreme Dynamic Range). This is Apple’s ‘extreme’ version of HDR (High Dynamic Range) offering 1000 nits of sustained brightness (with 1600 nits peak brightness) and a 1,000,100:1 contrast ratio, facilitating deep blacks to be displayed adjacent to gloriously bright colours.

The MacBook Pro’s Liquid Retina XDR display also offers support for the DCI‑P3 colour space with 10‑bit depth, which means it’s capable of displaying more than a billion colours. And, as with the Pro Display XDR, you can also select different reference modes. If you work with picture in your project or session, this display will make you grin as widely as if you were going 0‑100mph in five seconds in a McLaren 720S!

The 14‑inch MacBook Pro’s display has a native resolution of 3024x1964 at a density of 254ppi (pixels per inch), which means it offers more pixels than the display used in the previous 16‑inch MacBook Pro; the new 16‑inch MacBook Pro has a native resolution of 3456x2234 at the same density. What’s more, Apple have managed to set these displays within a border that is 24‑percent thinner. In fact, the only obvious interruption is the iPhone‑like notch for the FaceTime camera (see box). The ‘Default for Display’ resolution displays pixels on the screen as though you were looking at a 1728x1117, but the MacBook Pro is also capable of being used in four, scaled resolution modes from 1168x755, 1312x848 and 1496x967 all the way up to 2056x1329, which is especially good for eagles.

To further enhance the new display, Apple have also introduced ProMotion from the iPad Pro and the most recent iPhone 13 Pro. To understand why ProMotion is beneficial, consider that most computer displays have a fixed refresh rate, which is typically 60Hz (basically, 60 frames per second). The new MacBook Pro display has a refresh rate of 120Hz (which, incidentally, is why it can support Dolby Vision), allowing for a user interface that feels extremely fluid. What ProMotion makes possible is the ability to set the display’s frame rate adaptively, according to the amount of movement being rendered.

Relatively static content such as word processing doesn’t require a rapid refresh rate, and reducing it can lower the energy requirements. By contrast, when you zoom in and out of waveform displays, the MacBook will increase that rate such that the on‑screen motion appears smoother. And the quality of video playback goes without saying. Where ProMotion really shines in music and audio software is when you enable Logic’s Scroll In Play feature, Cubase’s Stationary Cursor Auto‑Scroll mode, or Pro Tools’ Continuous scrolling setting, allowing the edit windows to slickly glide along without the usual unevenness.

If you’re working with video and need to lock the display to a specific frame rate instead, you can do so in the System Preferences’ Display panel. The MacBook Pro’s Liquid Retina XDR display offers five fixed refresh rates: 60Hz, 59.94Hz, 50Hz, 48Hz, 47.95Hz. As you may notice, these frequencies haven’t been chosen by random: each setting is either exactly a 99.9‑percent version (a hangover from NTSC colour) or double a commonly used frame rate, such as 60fps, 50fps, 48fps, 30fps, 29.97fps, 25fps, 24fps and, of course, 23.975fps.

This is usually the point in a Mac laptop review where I’d criticise the lack of expansion ports. However, this time, Apple have uncharacteristically resurrected some of them, including our old friend the MagSafe connector, now in its third, even smaller incarnation (see box). The HDMI port will be helpful for those working with video, while photography and video users will welcome the return of an SDXC slot; there are also many audio field recorders that make use of such memory cards. The slot itself supports the SD 4.0 standard and is compatible with UHS‑I and UHS‑II SDXC cards, but not UHS‑III cards supporting SD 6.0 (which was released back in 2017) or the newer SDUC format.

The MacBook Pro sees the welcome return of connectors such as HDMI, and an SD card slot.

The main interface for external expansion remains USB‑C, with three connectors — two on the left side and one on the right — each supporting charging, DisplayPort, Thunderbolt 4 and USB4 (both at up to 40Gb/s). This is, of course, vital for connecting MIDI and audio interfaces, any video or additional screens, copy‑protection devices, and external PCIe cards via a compatible chassis (see box). Using the HDMI and USB‑C connectors, an M1 Pro MacBook Pro supports up to two Apple Pro Displays XDRs (or displays with up to a 6K resolution at 60Hz), whereas a MacBook Pro with an M1 Max can handle up to three Pro Display XDRs (or 6K displays at 60Hz) plus one 4K television or equivalent display.