GuitarTone is an effects processor and amp simulator which, in version 2, runs on iPhone, iPad and fourth-generation iPod touch devices. It costs almost nothing in its basic form, but Sonoma are clearly hoping that its fans will choose to invest in additional pedal and amp expansion packs, which greatly increase the scope of the product.

In its unexpanded form there are three amps and cabinets and three pedals, which doesn't sound like a lot, but it still gives you plenty of variables to play with. For a start, the pedals can be arranged in any order and, although there are only three slots, it is possible to have multiple instances of each effect. The basic set includes a phaser, drive pedal and a reverb, with a pre/post amp setting.

As for the cabinets, the three options are essentially variations on size. The largest is the '60s Slant 4x12, followed by a 2x12 and then a 4x10 blues tweed emulation. A button at the top of the page selects whether a single or stereo arrangement of the above cabinets is to be used, and it's possible to mix and match cab types. Further control can be exercised by selecting the type of virtual mic in front of the cab, the options being ribbon, precision, dynamic and condenser. Tapping on the image of the mic (or mics, as is the case when two cabs are selected) changes the type from one to another. It's that simple.

Right at the top of the page is the virtual amp head offering Gain, Volume, Bass, Mid and Treble controls. The head can be changed 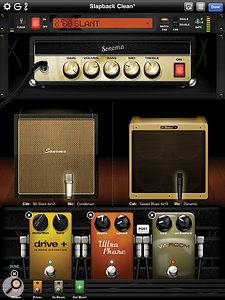 Even the basic version of GuitarTone allows a healthy mixture of amp heads, cabs and mics to be used. independently of the cabinets, so that, for example, a '60s Slant head could be used with 2x12 and 4x10 cabinets, and you could use different mics on each of those.

All such changes are made on a single Edit screen that prompts the user to save before exit. There is only one other screen, and that displays a pedal board from which any of the user's favourite 10 presets can be clicked into action. Alternatively, the user can swipe their finger across the amp and cab section to quickly flick from one preset to another.

GuitarTone also features a tuner, a little monitor mixer and an easy‑to‑use noise gate, and, since version 1, Sonoma have tried to improve the amp and effects sounds while adding some new features. For example, the power button now bypasses both the amp and cabinets, enabling the app to function (when an I/O interface is connected) as an effects pedal board for hardware amp and cab setups.

Sonoma say that they set out to create interpretations of vintage and custom amps, pedals and microphones, and although it is hard to judge how close they have got without setting up the real things, what can be said is that the sounds have a great deal of character and a respectable basic range of tones to choose from. Although the list of presets is long, many of them require the expansion packs to work. Nevertheless, any number of patch alterations can be made and saved.

GuitarTone's designers have thoroughly exploited the touchscreen technology of Apple's devices, resulting in an app that is easy to understand, quick to edit, and simple to operate. Any guitarist already in possession of a suitable audio interface would be mad not to give it a try. Tom Flint

GrooveMaker 2 is IK Multimedia's latest attempt to bring remixing and DJ performance to the masses. Claiming over 3600 loops that can be remixed and generally interfered with, the app serves as a front‑end for the purchase of 16 song packs costing between £2.49$3.99 and £3.99$5.99 each. Covering genres such as house, dubstep, hip hop and "rock ace”, each bundle contains over 60 loops designed to "work well together”, with the loops organised into categories anyone could recognise. Owners of the earlier GrooveMaker can have any packs they've bought authorised for use in the new app.

Once up and running, GrooveMaker 2's interface is as clear and easy as they come. In the middle of the main screen is an 8x8 grid for loops. A song can have up to eight active parts and when any part is selected, its loop is shown graphically beneath the grid. You're free to interact with the loop while it plays, sliding your finger to change its length smoothly during playback. Press the Loop button and a list appears from which you can select a replacement.

Probably the neatest feature is the button to randomly shuffle the available loops, with four varieties of randomness to choose from. So if you wanted a random percussive break, take the option 'B perc' and prod the button a few times. If you hit on a combination of loops you find pleasing, the snap key saves a snapshot for later recall. The snapshots can be arranged to create your own unique mix of the existing song elements.

All function buttons are large and unambiguous and it's a relief to use an app designed for full‑sized fingers for a change. A press of the FX button produces an X/Y pad for dynamic effects control, complete with motion recording of up to eight bars to mash up those loops even further. The effects are pretty comprehensive, starting with a multi‑mode filter sporting 12, 24 and 48 dB responses. The delay offers filtering too, along with straight, dotted or triplet delay times, and the remainder of the effects are equally useable. They include a reverb, stutter effect, phaser, flanger and bit-crusher, with even more available as in‑app purchases. This could start to ramp up the cost if you've already been tempted by the in‑app song store.

Fortunately you needn't rely exclusively on prepared loops — you can record original material or take the flexible audio import option. However, 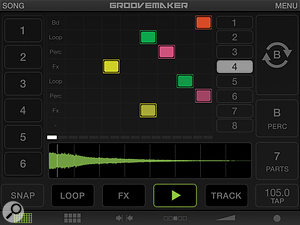 GrooveMaker's main screen: loop-juggling central! imports are performed for each song only, and not for the app as a whole, which seems unnecessarily limiting. If you'd had a moment of madness and bought all the available songs, you couldn't mix and match their loops freely, presumably so the loops continue to work well together. I pasted in a few loops made in Funkbox then added pads from Animoog and sound effects from Virtual ANS and finally started to hear something IK Multimedia didn't prepare in advance.

Apparently, if you have an iRig or iRig Mix you can sync to external audio sources such as a CD player or deck, but I was unable to test this. I crashed it only once, while trying a randomisation option during playback. The crash lost my mix in progress, although the loops I'd imported were saved.

If GrooveMaker 2 interests you, there's a free version with three included songs and just one effect. It will at least demonstrate the interface, but I'm not sure how many SOS readers will find it noteworthy. The emphasis is too heavily on pre‑made loops and although there is scope to rework them, chop and process them, even add user loops too, there's no 'new' option in the song menu, which is pretty telling. GrooveMaker 2 never escapes the pungent aroma of painting by numbers, which isn't helped by constant reassurances that musical knowledge is not required. After using it for a while, I definitely felt I knew less than when I began. Paul Nagle

Peterson's original Strobe tuner was a mechanical device based around a speed‑controlled motorised disc and a strobe light driven from the input signal — a level of complexity that as you can imagine made it pretty costly. It graced professional stages and studios throughout the world because of its great accuracy, and a lower cost version became available when Peterson brought out a digital model that used a liquid crystal display and a crystal clock instead of a motor. The company currently produce several pedal-format tuners and even a compact clip‑on tuner working on the same principle. Accuracy for the pedal versions can be as good as a 1000th of a semitone, which is why guitar techs use them for setting guitar intonation.

While the pedal versions also include a number of so‑called 'sweetened tunings' to help soften some of the compromises inherent in fretted instruments and their use of the equal temperament music scale, the iPhone app version works as a straightforward chromatic tuner, replicating not only the classic strobe display, but also giving a numerical readout of the nearest semitone plus the actual pitch to an accuracy of a 10th of a cent. By tapping the cents display you can switch the readout to Hz or even MIDI note number. Reference pitch can be changed from the default A=440Hz and there's also a built‑in noise filter that can compensate for background noise after being allowed to 'learn' the noise for a few seconds. Other user options include the ability to learn a calibration pitch, for example from a non‑concert-pitch 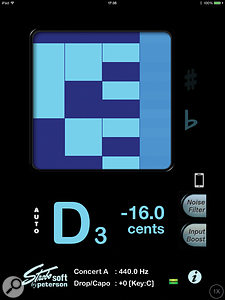 iStrobosoft's simple interface belies its complex workings. piano, and to set the tuner for drop tunings. By default the tuner is in Auto mode, so that it tracks the pitch you are playing and shows the nearest semitone, but you can also set it to the desired note and lock it there if required, swiping your fingers across the note display to increment or decrement by semitones.

The display colour can be changed if required, but the default blue matches the pedal range and is easy on the eye. Pickup is via the internal mic, which the app asks permission to use first time around, and there's a gain-boost button for occasions when more gain is needed.

The tuner requires iOS 4.0 or later to run and is optimised for the iPhone 5, though it ran perfectly on my iPhone 4. Peterson's iStrobosoft is very effective in tuning both acoustic and electric guitars, and it is also accurate enough use when setting up a guitar and checking the intonation. And at a hair under £7$10, it seems like a real bargain. Paul White