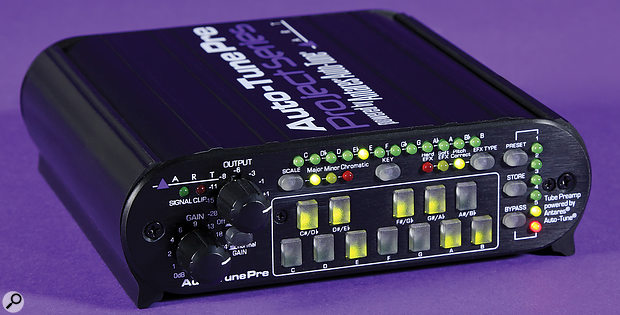 This combination of preamp and Auto‑Tune processor could be just the thing for adding a radio‑friendly sheen to your live performances.

ART have teamed up with Antares to produce this DI‑box‑sized Auto‑Tune Pre, a mic/line preamplifier with a hardware version of Auto‑Tune built in. Clearly, such a product will hold little appeal for the DAW user as pitch correction is invariably best applied after recording, usually via plug‑ins, to allow scope for adjustment and parameter automation, but for live performance it has very clear applications. The Auto‑Tune Pre could also prove very useful for those using hardware multitrack systems that don't have the capability to run plug‑ins, as recorded tracks may be re‑processed via the line input of the Auto‑Tune Pre.

The Auto‑Tune section of the preamp, which claims a low latency of around five milliseconds, has a user interface designed to work as much like the plug‑in version as possible, and that extends to 'piano layout' note‑selection buttons on the front panel. These allow the user to create custom scales, as well as to select straightforward major or minor scales according to the key, though there's also a straightforward chromatic mode. Five user presets are available for storing the scales appropriate to specific songs, and these may be stepped through using an optional footswitch where required.

While the plug‑in version of Auto‑Tune has a fully variable control to set the speed of pitch correction, the Auto‑Tune Pre has just three speed modes, labelled Pitch Correct, Soft EFX and Hard EFX. The last two are special effects settings that capitalise on the now well‑known (and some would say overused) side‑effects of over‑fast pitch correction. Hard EFX produces the familiar hard‑quantised robotic or pseudo-vocoder sound recognisable from countless records, while Soft EFX imparts a hint of Auto‑Tune in a less obvious way.

On the mic amp side, a discrete‑component front end feeds a 12AX7A valve circuit to add a little warmth and character to the signal path. Internal step‑up circuitry boosts the valve supply voltage to well above what the power supply rating might suggest,and also supplies the phantom power. A +20dB gain switch operates in conjunction with the variable input gain control, where a pair of LEDs show signal present and clip status for level-setting purposes. A further rotary control sets the output level.

A TRS insert jack permits external processing to be interposed in the signal path between the preamp and Auto‑Tune sections, while a TRS footswitch jack socket on the rear panel provides a means of remotely bypassing the Auto‑Tune section and stepping through the five presets using a dual, momentary action (non‑latching) footswitch. 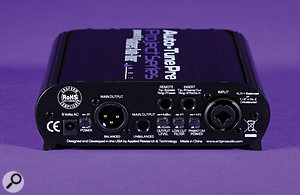 As well as the audio I/O, the Auto‑Tune Pre features a footswitch input, allowing you to remotely bypass the Auto‑Tune processing.

A 'combi' XLR/jack socket is used for the mic/line input, with the main output being present on both balanced XLR and unbalanced jack connectors. Three rear‑panel button switches select +4dBu or ‑10dBV output levels, low‑cut filter on or off, and 48V phantom power on or off. A further button functions as a power switch, with power coming from the included 9V AC power adaptor. ART quote a dynamic range of better than 104dB (A‑weighted), with the frequency response staying flat from 10Hz to 20KHz, ±1dB. The maximum output level is +24dBu (balanced).

The preamp section is quite straightforward in terms of control, so you only need to adjust the input gain until the red peak LED (which comes on 3dB below clipping) flashes only briefly and very occasionally on the loudest peaks. You may also need to engage the low‑cut switch, which will help combat vocal popping in live performance. A maximum of 66dB of gain is available if the output control is also set to full (+5dB), and that's plenty for a typical live performance using a close‑up dynamic mic.

For the Auto‑Tune section to work reliably, the mic should be positioned to pick up as little spill as possible, so the vocalist will probably need to work quite close to the mic, as excessive spill can defeat or confuse the pitch-tracking process. Individual scale notes can be toggled on or off via the note keys on the front panel, which have illuminated switch caps to show which notes are active.

When setting a simple major or minor scale, a 'key' button allows the 12 scale options to be cycled through, and a row of 12 LEDs indicates the currently selected key. A similar arrangement allows stepping through the major, minor or chromatic scale options, and the lighted 'note' buttons change according to your selection so that they always reflect the target notes for the current setting. Of course it doesn't matter what scale you select if you use chromatic mode, as the pitch is always nudged towards the closest semitone (and in this mode, allthe note buttons light up to show that they are all 'valid').

A useful setup aid is provided in the form of pitch oscillators, which can be activated by pressing and holding the button of the note pitch you want to hear for two seconds or more. There's no mention of any means of offsetting the internal pitch reference from its A440Hz setting, so if you're playing along to a non‑concert‑pitch instrument, the Auto‑Tune function should be bypassed. Pressing Store saves your setting to the current Preset, as shown by the LEDs on the right-hand edge of the panel. The state of the bypass switch is also saved with each preset.

Tested with my acoustic guitar combo's mic input and a dynamic microphone connected to the Auto‑Tune Pre, I was a little disturbed to be greeted by a low level, but still annoyingly audible, background hum/buzz that wasn't there when I plugged the mic straight into the combo. I made sure that the Auto‑Tune Pre and its cables were well away from the amplifier, and other powered devices in the vicinity were also unplugged to avoid interference, but the buzz remained unless the Auto‑Tune Pre was switched off. Oddly enough the level of buzz changed very little when the output level switch was operated, but with the output level set to +4dBu, the buzz would almost certainly be inaudibly low in a live situation, as long as the mic gain was set sufficiently high.

In all other respects the unit worked exactly as promised, with a clean, solid‑sounding pre‑amp and effective Auto‑Tuning. In the normal pitch correction mode, the correction rate is fairly slow, so natural inflections aren't usually affected, unless you are into making very slow pitch glides. There's a sense of chorusing when you hear the pitch-corrected vocal alongside your natural voice, but nothing too off‑putting. The middle setting is more assertive, but still allows most of the singer's natural articulations to come through. This introduces some familiar Auto‑Tune fast‑slurring artifacts, but everything still sounds more or less human with a contemporary edge not dissimilar to that heard on many pop records.

Go to the Hard EFX setting and the pitch correction is so fast that most of the natural articulation is stripped out, leaving you with a hard, pitch‑quantised sound, again corresponding to the kind of thing heard on some records — Cher's 'Believe' being the best-known example. On these faster settings more noticeable chorusing effects can be heard as the shifted sound interacts with the sound of your un‑amplified voice. If that is too off‑putting you may wish to arrange for non‑pitch‑corrected monitoring!

Other than a little background hum/buzz, which can be largely alleviated by being careful with your gain and output level settings, the Auto‑Tune Pre works exactly as it should, delivering the classic Auto‑Tune processing in a very easy‑to‑use manner. In addition to its vocal applications, the process can also work well on certain instruments, such as sloppily played cello or violin, when used in a pop context. There are also special effects galore to be had by experimenting with scales containing very few notes. I can't get too excited about the Auto‑Tune Pre as a studio processor, at least not for DAW users, but for live performance or the hardware studio operator it has a lot to offer.

The TC Electronic Mic Mechanic puts automatic pitch correction into a pedal format, along with a mic preamp, some auto EQ/dynamics functions and a selection of delay/reverb effects. It has variable correction speed, but only operates in chromatic mode.

A practical implementation of Antares Auto‑Tune, in a compact mic‑preamp format that is well suited to live-sound work.