A new dual preamp from ART combines imaginative valve circuitry with more digital output options than you can shake a stick at!

ART have been in the business of making affordable, effective signal processors and effects units since the mid-'80s, but in the early days their large overlapping product range and ever-changing cosmetic design may have hindered rather than helped their sales effort. Today, their styling has settled down a little, and their manufacturing has been moved to China in order to keep the retail prices low. This combination of American design and low Chinese manufacturing costs has enabled them to bring some quite sophisticated products to the project studio market at very attractive UK prices. One such is the Digital MPA mic preamp under review here, which combines discrete Class-A input circuitry with valve gain stages, variable input impedance, and comprehensive digital output options at up to 192kHz.

Presented in a smart and ergonomically friendly 2U format, the Digital MPA comprises two identical channels of microphone preamplifier with digital outputs fitted as standard. Over the past few years, the idea of variable input impedance has gained favour as a means of more optimally matching specific microphones to the preamplifier, though most users simply adjust for what sounds most musical, rather than what is technically correct. This somewhat esoteric feature is provided here as a continuously variable control that adjusts the input impedance from 140Ω to 3kΩ. Most mics are happy working into around 600Ω, but increasing the impedance will often increase the gain slightly and also impart a sense of warmth. By contrast, a lower impedance tends to produce a slightly thinner, tighter tone.

The unit has a curiously semi-retro look, with large metal knobs and mechanical VU meters on the one hand providing a counterpoint to modernistic LED illuminated perspex buttons and LED bar graphs. Class-A input stages are popular in mic preamps, because they don't suffer from crossover distortion and they don't use huge amounts of negative feedback, which has been known to compromise transient performance. Here, the circuits have been designed to give low noise, not only at the high gain settings normally quoted in the spec sheets, but also at medium and lower gain settings, where some less sophisticated designs fall down. The quoted Equivalent Input Noise (EIN) is -133dBA, which compares well against the more typical values of around -128dB quoted for the majority of mixers and mic preamps.

From the input stage, the signal feeds into a tube gain stage where the user is presented with another choice, this time between high and low plate voltages. Low plate voltages impart a slightly artificial, but often musical, warmth to the sound, while higher plate voltages produce more of a traditional tube sound, which I think is far more subtle. Interestingly, the audio bandwidth extends to 48kHz in low-voltage mode and to well over twice this figure in high-voltage mode, though where the digital output is used the final frequency response will naturally be determined by the choice of sample rate.

Balanced XLR and jack inputs are available on the rear panel to accept mic- or line-level sources, while a further unbalanced, high-impedance instrument jack is available on the front panel. Connecting to this overrides the rear-panel connections. There's also a TRS insert jack for placing compressors or equalisers in the signal path.

The gain adjustment comprises a rotary control, with a 45dB gain range, followed by a +20dB gain switch, where the latter brings in additional gain via the tube circuitry. There's also a further 10dB of gain available using the Analogue Output control, so overall up to 75dB of gain is available. A single-pole (6dB/octave) high-pass filter, variable between 10Hz and 200Hz, is available for each channel independently, as are +48V phantom powering and phase reverse.

Digital outputs are not uncommon on modern mic preamps, though in many cases they are provided as plug-in option cards. Here everything is built in as standard, and in addition to the usual AES-EBU XLR and S/PDIF co-axial phono outs, there's also a dual-function optical output connector. Depending on the setting of the front-panel selector button, the optical output either carries a traditional stereo S/PDIF signal or an ADAT-format signal. The rear panel also includes an ADAT input, and when ADAT mode is selected, anything coming in on ADAT channels three to eight is passed straight through to the ADAT output, while the two mic preamp signals are sent out on ADAT channels one and two. When using the S/PDIF or AES-EBU formats, the sample rate may be selected by means of a rotary switch on the front panel to be 44.1kHz, 48kHz, 88.2kHz, 96kHz, 176.4kHz, or 192kHz. There's also a BNC word-clock input as well as another BNC connector to pass the word clock along to another device. When locking to the ADAT optical input, the sample rate must not exceed 50kHz, which should accommodate the varispeed range of a 48kHz ADAT machine.

The signal feeding the digital converters passes through another gain control with a range of 'off' to +10dB, so that the converters can be set to operate at an optimum level as shown by the digital level meters. Where required, the 24-bit signal may be dithered down to 16 bits within the Digital MPA (selectable via a front-panel button), though in most instances it is best to record and mix at 24-bit resolution, dithering down to 16 bits immediately prior to CD burning. LED ladder meters monitor the digital output level, while the VU meters can be switched to read the analogue output level or the tube stage output level. In tube mode, there is around 15dB of headroom above 0VU before the tube saturates in high-voltage mode, or 10dB headroom in low-voltage mode, so the meters give a fair idea of how much tube flavour is being added to the sound. In high-voltage mode, the distortion is actually very low until the signal gets within 6dB of clipping, above which the tube acts somewhat like a soft limiter. In low-voltage mode, the increase in distortion is more progressive.

I tested the Digital MPA with different models of large- and small-capsule capacitor microphone, recording voice, acoustic guitar, and accordion, as I had some obliging musicians on hand. I was generally impressed by the clean, transparent sound of the unit, which I used mainly in high-voltage mode, though the low-voltage option is also sensibly subtle and adds a pleasant warmth that doesn't get messy unless you really drive the tubes too hard. The variable input impedance produces a noticeable but again quite subtle effect, and I found all my mics sounded best when the impedance knob was close to, or just above, its centre 600Ω position. 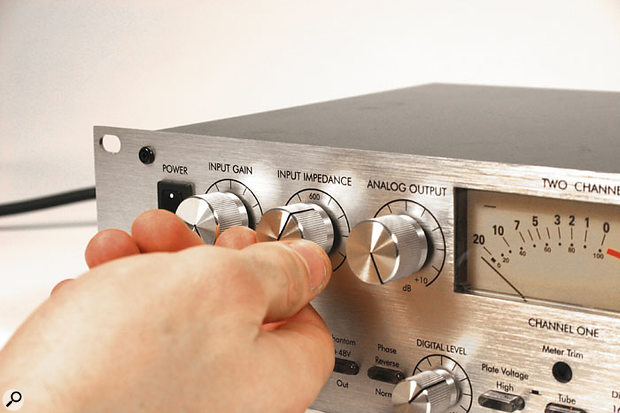 The variable input impedance of the Digital MPA allows you to achieve a variety of different tonal colours from a single mic.Photo: Mike Cameron

Once you get beyond a certain quality of mic preamp, it can take a long time to judge exactly how good the performance is, as there are numerous factors that can influence the sound you're getting. However, the Digital MPA achieved a good sound right off with little or no effort, which is always a good sign! In fact the only feature I really missed was a headphone output, which I find helpful when setting up.

The quality of the converters also seems to be good, as I made a number of recordings by feeding the S/PDIF output directly into my MOTU audio interface and got great results. However, it's probably fair to say that the performance at the higher sample rates probably won't give a huge increase in quality, because to take advantage of high-resolution audio you need to use extremely accurate and sophisticated converters, which invariably cost many times more than this unit does. Nevertheless, the Digital MPA works well up to 96kHz, but what was most important to me was that it sounded good at the real-world sample rates of 44.1kHz and 48kHz.

The ART Of Preamp Design

The Digital MPA is a very clearly presented piece of equipment that does everything you'd expect of a microphone preamplifier. The versatile tube stages are useful in shaping the tone you want from your microphone, as is the variable input impedance, but behind all these options the basic sound is good. Having a digital output as standard is always welcome, but ART have gone the extra mile here too by including ADAT support and optical S/PDIF options, so the Digital MPA should be able to integrate into just about any kind of recording system.

Realistically, you're never going to get truly high-end performance at this UK price, but what ART have achieved within their design budget constraints is extremely creditable. The Digital MPA is a good-sounding all-rounder of a mic preamp with the bonus of some user adjustment to influence the tonality of the end result. I discovered no obvious weaknesses when using it on typical studio sessions, and when it is teamed up with some decent mics it is capable of great-sounding results, which is after all the bottom line.

A good general-purpose mic preamp that offers both tonal flexibility and quality at a sensible UK price.