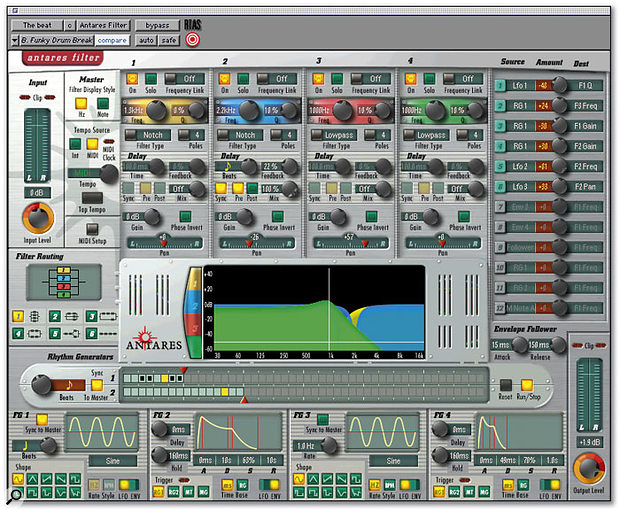 Antares certainly don't believe in the 'less is more' maxim, if their new filtering effect is anything to go by.

If you found a vintage synth with four multi-mode filters, each having its own envelope generator, LFO and delay line, you'd think you'd died and gone to analogue heaven. But these days, it's easy to dream up software devices with specifications way beyond what any of the hardware classics was capable of. Antares's Filter plug-in has all the above features and more, including two built-in step sequencers, a 12x12 modulation matrix, an evelope follower, extensive MIDI control and a variety of routing options.

It's tempting to ask why they didn't just add a couple of oscillators and turn it into a full-blown synthesizer, but as it is, it depends on having a mono or stereo audio input, and can be used as an insert plug-in in any sequencer that supports VST, RTAS, MAS (Mac OS only) or Direct X (PC only) formats. Pro Tools users should note that there's no HTDM version, so you can't use it on aux tracks within a TDM system. This is a fairly major limitation, since as we'll see, Filter is more useful on mixes and submixes than on individual instruments.

Authorisation is via challenge and response, and worked as expected in the review system. Annoyingly, no minimum spec is given, but I found that it just about ran on my ancient 300MHz G3 Mac, which is pretty good going for such a complex plug-in. In other respects, the printed manual is good, and the separate explanation of what all the presets do is equally welcome.

Antares describe Filter as 'The audio equivalent of a brilliant surgeon — who's a really good dancer.' One might add that it's the graphical equivalent of a hyperactive toddler — who's also got a migraine. Everything is crammed into one window, with lurid primary colours used to distinguish the four filters, and most of the controls extending no more than a few pixels across. None of the individual elements is too cryptic, but the overall effect is a bit overwhelming, and a multi-page approach to interface design might have been more friendly.

The centre of Filter 's window shows a plot of level against frequency, with the responses of each of the four filters shown in a different colour. You can adjust the cutoff and resonance of each filter by clicking and dragging, but I was disappointed to find that the display is not animated to show how filter response changes with modulation. This means that the information it provides is useful only when filter frequencies are not being modulated — and modulating filter frequencies is precisely what Filter is all about.

To the left of the frequency display is a set of buttons allowing you to select various series/parallel routing combinations. The individual controls for each filter and its associated delay line are at the top, whilst the modulation sources — LFOs and envelope generators — are ranged along the bottom. Immediately below the frequency display are Filter 's step sequencers, while the area at the top right is where you set up modulation routings.

Filter is certainly bristling with features in every area. The filters themselves can be switched between low-pass, high-pass, notch and band-pass modes, with slopes variable from two-pole (12dB/octave) to eight-pole (48dB/octave). Each of them has a Frequency Link pop-up, allowing you to tie its cutoff frequency to that of any of the others. All of the filters also have their own delay lines with variable feedback and up to two seconds of delay. Delays can be switched pre or post the associated filter, and like all of Filter 's time-related elements, can be sync'ed to host tempo. Output from each filter stage can also be polarity-inverted and, unless you're using the mono-to-mono version of Filter, panned.

The step sequencers, or Rhythm Generators as the manual describes them, are simply two strips divided into cells of equal duration; each cell can be either on or off, and their state is switched by clicking in them. When the sequencer reaches a cell that's switched on, it sends a trigger to any envelope set to receive it, and a maximum positive value to any modulation destination it's hooked up to. Red arrows can be positioned to set repeat points for each sequencer, while the single Run/Stop button behaves differently depending on whether, and how, the plug-in is sync'ed to host tempo. With the Rhythm Generators' Sync button unlit, a single press of Run/Stop starts the sequence, a second press freezes it and a third returns to zero. With Sync on, its behaviour depends on the plug-in's Master Tempo setting, and it can either act simply to turn over start/stop duties to the sequencer transport controls, or independently of them. When Filter is sync'ed to master tempo, starting playback in the middle of a song causes the Rhythm Generator position to jump to the appropriate point in the sequence, which is a nice touch.

Each of the four 'function generators' at the bottom of the screen can be switched to show controls for an LFO or an envelope generator, although in every case, both are always available as modulation sources. A wide range of LFO waveforms is available, including some neat random shapes, and LFO rate can be sync'ed to host tempo or set freely in Hertz or beats per minute. When not tempo-sync'ed, rates for each of the four LFOs also appear as modulation destinations in the mod matrix.

Four LFOs and four envelope generators are always available as modulation sources, though they are edited on an either/or basis.

The EGs are equally well specified, offering graphically editable ADSR envelopes with an additional Hold time parameter for the Sustain phase. They can be triggered by active cells in either of the Rhythm Generators, or by a MIDI Note On message; you can choose which MIDI channels to assign to each of the EGs. An additional MIDI Gate mode works the same way, except that the Hold parameter is ignored, and the Sustain level is held until a Note Off is received. You can also insert a delay between an EG's receiving a trigger and firing, whilst the display can be set to show envelope parameters either in milliseconds or in precentages of the step sequencer's cell duration.

The modulation matrix is straightforward to use. Sources include the four LFOs and EGs, the simple envelope follower, the two rhythm generators, and a variety of MIDI messages such as notes, mod wheel, velocity and pitch-bend data. All the key parameters for the filters, delays, LFOs and EGs are available as destinations. Sadly, though, there's no way to route a side-chain signal through the envelope follower; nor can the follower output a trigger for the envelope generators.

Overall, Filter 's interface is not difficult to understand, but I didn't find it particularly inspiring or intuitive either. It's definitely not one of those plug-ins where you can rely on happy accidents to create worthwhile results. The size of the controls means you're often squinting at the screen to find out what you're clicking on, and their sheer number makes programming anything interesting a bit of a hard slog. This is especially the case if you start from scratch, so it's handy that Antares have supplied a decent selection of editable presets, complete with suggested parameter tweaks.

Of course, it doesn't matter what the interface is like if a plug-in doesn't sound very good. So does Filter live up to Antares' claims for it? The best answer I can give is 'sort of'. As a surgeon, it's certainly capable enough, thanks to its 48dB filter slopes, but I can't imagine anyone buying a plug-in like this just to use it as an EQ. As a dancer, meanwhile, it's more Darcy Bussell than Patrick Swayze. Filter is certainly not the sort of plug-in to elbow its way through a nightclub, waving a glowstick with a deranged look in its eye. It's just too damn polite. The filter response is smooth and free from stepping or other artifacts, but never becomes unstable or threatens to self-oscillate, no matter how high you push the resonance. What is missed most of all is some form of soft-saturation algorithm to model what happens when you overdrive some analogue filters. There's no warm fuzziness on offer when you boost the levels, just peakiness that leads all too predictably to harsh clipping at the output. I searched in vain for settings that would beef up an analogue-style bass line or create a truly pounding kick drum.

However, Filter does have some impressive tricks up its sleeve. Paradoxically, its strengths become more apparent the further away you move from straightforward filtering applications. It's definitely at its best when fed with a fairly complex source such as a complete mix, where it can supply all sorts of interesting effects. You can muck about with the spectral balance and dynamics to emphasise a particular instrument such as the bass, crisp up a dull hi-hat, bring drums to the front of the mix or push them to the back. More extreme settings can turn drum beats into resonant, metallic clangs, or warp tuneful source material into sinister, humming machinery. It can also produce some surprisingly delicate phasing and flanging effects, and if you want rhythmic delays that burble and chatter in interesting ways, you've come to the right place.

Of course this is not the only filter-based effects plug-in on the market. An obvious challenger to Filter on the Pro Tools platform is Sound Toys' Filter Freak, which definitely has the edge in terms of raw sonic muscle. Filter Freak 's 'Analog Mode' steamrollers Antares' design for conventional filtering tasks, whilst its neat animated display is also a useful aid to programming, and it comes in HTDM as well as RTAS formats (though there's currently no VST, Direct X or MAS version, and Filter Freak is a fair bit more expensive than Antares' plug-in).

When it comes to more unusual effects, however, Filter Freak can't match the versatility of Filter, and the scope for radically altering loops and beats is far greater in Antares' plug-in. An alternative comparison here might be Ohm Force's Ohm Boyz. Despite offering multiple delay lines and two resonant filters, it still can't match Filter 's wealth of parameters or MIDI controllability, but Ohm Force's quirky interface lends itself to serendipitous tweaking in a way that Filter 's doesn't. Like Filter Freak, Ohm Boyz can also supply the grit and dirt that are missing from Antares' plug-in.

There is some fairly strong competition around, then, but there's also no denying that Filter has a uniquely comprehensive combination of features. Users who are prepared to put a little work into programming it will find it capable of a wide range of results, some of which would be difficult or impossible to achieve with other plug-ins. It wouldn't be my first choice for straightforward filtering functions, but it provides good scope for more offbeat effects, and would certainly repay attention from anyone looking for original treatments for sampled loops.

The filters themselves aren't the most characterful around, and the interface is a bit indigestible, but its extensive delay and modulation options still make Filter a powerful tool for manipulating loops and beats.