With its innovative feedback detection display, this graphic EQ has the power to seriously shorten your system setup time.

The HQ231, made by Applied Research & Technology ('ART' to you and me) is a dual 31‑band graphic equaliser and feedback detection unit. There are plenty of 31‑band graphic EQs around, and particular models are still favoured by many sound engineers despite these facilities nowadays being incorporated into digital mixers. The HQ231 is an accessibly priced unit, and goes a step beyond the norm with its illuminated slider buttons and built‑in feedback detection feature. It's a standard 2U rack size and is housed in an all‑steel casing, which is nicely finished in black, with clear markings on both the front and rear panels. The whole thing has a good standard of external finish, and the model provided for me to try felt solid enough (it's just over 4kg) with no flexing or rattles from inside. There are no rubber feet, as the unit is designed to be rackmounted, neither are there any ventilation slots in the casing, so provided it's sensibly located within a rack housing then there's nothing to obstruct — although I used it in 'free air', it was working for a good few hours before only becoming slightly warm.

The internal power unit is a good thing to see; much better and infinitely more convenient than messing around with an external PSU.

The HQ231 is a 'proper' dual‑channel equaliser, in that it contains two completely independent channels, each of which are equipped with a full set of controls and can therefore be operated as if they were two units mounted one above the other. The layout is absolutely straightforward, and on the rear there are balanced-XLR and standard jack inputs and outputs, plus unbalanced RCA phono connectors — the different connectors are provided for convenience to suit whatever the HQ231 is being connected to, not as simultaneous inputs/outputs.

On the front panel there are twin rows of sliders for adjusting the 31 frequency bands, and three knobs that control low‑pass and high‑pass filter cut‑off points, as well as the input level. The HPF and LPF act as sort of audio end‑stops, and provide 12dB/octave shelf filters (as opposed to the band‑pass filters in the graphic section), for additional control of unwanted low‑ and high‑frequency material. If they are not needed then the high‑pass control can be set fully anticlockwise and the low‑pass control fully clockwise, which effectively takes them out of circuit. The level control is used to adjust the incoming signal level, but it's not just to prevent overloading the input stage: it's also desirable to set this control to achieve the same output level regardless of whether the HQ231 is in active or bypass mode. The HQ231 has a hard (relay‑switched) bypass function, which, in operational terms, requires a single button press on the front panel. However, if the supply power is interrupted for some reason then the unit will instantly drop into bypass mode. Changing into bypass mode in the middle of a live show probably wouldn't be a desirable thing from a number of angles, but if this were to happen then matching the active and bypassed output levels would at least avoid any dramatic changes in system level. In practice I found that unity, with the EQ faders set flat, was actually nearer to '1' on the printed scale than '0', but as there is no centre detent on the controls this isn't an issue. I accidentally tested this feature for real by managing to trip over the power cable, resulting in the HQ231 losing power. At the time it was running into a pair of active PA speakers, and I'm pleased to report that absolutely nothing untoward happened — the unit went into bypass mode, and everything (apart from the equalisation applied) carried on as normal, with no clicks or pops. And when I reconnected the power it simply went back to doing its job without any fuss; just a quiet click from inside the unit as the relay kicked in again.

The HQ231 is a 'constant‑Q' equaliser, which means that each of the 31 band‑pass filter circuits in each channel maintains the same bandwidth, or sharpness, no matter how much boost or cut is applied to that frequency band. In older designs, the position of the slider would alter the Q‑factor of the resonant circuit, resulting in a much wider filter at moderate cut or boost settings (where you'd probably want to use them), which in turn led to unwanted interaction with adjacent filter bands, and it took time, skill and patience to set them up properly. Constant‑Q means that, in effect, the curve you see looking at the sliders is more‑or‑less the actual response curve you're applying to the programme material, which makes operating the equaliser more intuitive. The slider controls can be set (globally per channel) to operate over either a ±6dB or ±12dB range, the lower setting being the one to go for in general use as it provides more precise control, but with more extreme measures available if required.

Patching in the HQ231 is a simple process, and it would normally be used on a mixer bus insert point or placed between mixer output and power-amp input. A (minor) practical issue I noted is that the HQ231 is only about seven inches deep, and the channel 1 (uppermost) XLR connectors may be awkward to get at if the unit is mounted at the top of an enclosed rack or directly below another piece of equipment that overhangs it — the output XLR is latched and requires finger space above to release it without effort. This isn't a problem if the HQ231 is permanently installed, but for mobile use I'd want to use it in a shallow rack or leave some XLR tails in place. Simply mounting the XLR connectors sideways would have made them easier to use.

Let There Be LEDs

When the HQ231 is switched on, all the filter‑level slider handles glow red, and although small they are easy to adjust without accidentally moving the adjacent bands. The red LEDs are positioned near the tips of the knobs, and are therefore visible from a wide angle above, below or to the side, which means that you don't have to position the outboard rack too precisely to see the display clearly. The illuminated sliders are nice and bright, and they start to react to the programme material as the level going through the unit increases. Each filter LED glows brighter as the signal level in that band increases, but at the same time the contrast between individual filter bands also increases so that at higher levels it's more obvious where the stronger frequency content lies across the spectrum — turn up the level on one band enough and the 'weaker' bands almost don't light up at all, which makes it easy to see what's going on, frequency‑wise. The overall effect is pleasing and easy to read, and the display reacts instantly to the signal content so you have to watch it for a few seconds to make sure you see all that is going on — a slight 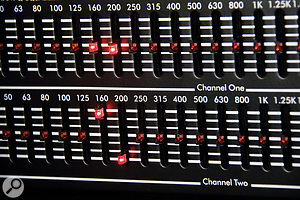 As you can see, the spectrum analysis is performed prior to EQ, so even when a band is being cut, its LED still lights up to show that frequency's level at the input. smoothing or short peak‑hold function would be a nice option to have, as would a display sensitivity control so that optimum display contrast could be achieved without needing to change the actual signal level.

The HQ231 acts as a spectrum analyser, and of course this is the basis for its feedback detection function — it doesn't automatically filter out feedback, it displays the frequency content passing through by lighting up the appropriate filter bands, to show where the problem is occurring so that the operator can take action to sort it out. This may sound low‑tech compared to an automatic feedback suppressor, but it is actually a very useful tool, especially when setting up the system, as it provides specific information about what's going on so that informed choices can be made. If problem frequencies cause feedback it's generally better to fix the underlying problems than simply hit those frequencies at 'system' level; if EQ is applied on the main mix then it affects every input source, not just the one with the problem, and if it's applied to a particular input then it affects all the outputs (ie. mains, monitors and recording feeds). The HQ231 shows what is happening and, if feedback starts to occur, the relevant frequency bands light up brightly and can be initially adjusted using the EQ sliders, but then the individual input sources can be investigated, the issue addressed at source if possible, and the HQ231 restored to its previous setting.

One thing I really liked about the HQ231 is that the spectrum analysis works even in bypass mode and, when using an analogue mixer without a built‑in analyser, I found this a very useful tool to help me set up my system effectively and quickly. When using the filter levels as an active equaliser, the individual LEDs respond to input level rather than post‑EQ level, ie. they stay bright to show where the strongest incoming frequencies are, even when those filter bands have been attenuated (my picture of adjacent sliders shows this).

I have to admit that my own outboard graphics haven't been used for a while now, but a hardware GEQ can be a life‑saver when everything else goes wrong, and when you're really up against it there's nothing guaranteed to work like plugging cables in and out of a separate bit of kit. I recently used a last‑minute replacement (and unfamiliar) digital desk for a show, and had so much trouble trying to assign the internal graphic EQ to the monitor sends that we resorted to patching in a bank of outboard units. If I'd had the HQ231 to hand at the time, running through each band and ringing out the system would have been a quicker and less noisy process.

In everyday terms, it's an easy unit to set up and use, it's perfectly quiet enough for mobile live‑sound applications, and it offers really useful frequency measurement and display features over and above the norm.

I can't think of a directly competing product — combined graphic EQ/spectrum analysers do exist, but they tend to be made for the hi‑fi market.

A practical graphic EQ with an innovative and useful frequency spectrum display.