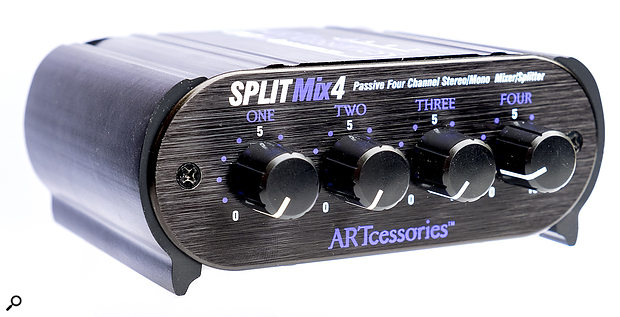 I recently wanted to simplify a stage keyboard setup that involved mixing two stereo keyboards together while providing duplicate outputs for the FOH feed and local powered monitoring. A Mackie 1402VLZ mixer had previously served, but it was bulky and required mains power: it was overkill for such a simple job, and could be better utilised elsewhere. In searching for a cheap and simple alternative I came across the ART SPLITMix4, whose simple yet ingenious design opens up all manner of possibilities!

Like many of ART’s compact problem-solving boxes, the SPLITMix 4 comes in a robust extruded-aluminium case, this one measuring 117x47x104mm (whd) and weighing just 380g, with white and purple lettering on a black anodised finish. It’s a completely passive box, with just four rotary knobs on the front panel, and 10 TRS (unbalanced stereo) connectors on the rear. The rotary controls adjust the level of each of the four input/output channels, while the lower row of connectors are labelled Mix In 1-4 and Mix Out, and the upper row, Split In and Split Out 1-4.

As the name (and the I/O connectivity) suggests, this neat little unit can serve either as a four-into-one passive stereo line mixer, or as a one-into-four stereo line splitter, just by using the appropriate input and output connectors. However, it goes rather further than that since each of the four channels can also be used as an independent passive stereo level control, and — here’s the really clever bit — these three core functions can be used in any combination. 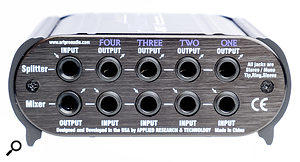 Internally, there are, in effect, two stereo buses. One serves as the ‘Split’ distribution bus, fed from the Split input socket to the four split outputs. The other is the stereo Mix bus where the four mix inputs feed the Mix Out socket. The cunning part is that the Split bus is routed via the switching contacts on each of the four Mix input sockets, and the Mix bus is only reached via the switching contacts on the four Split Output sockets.

Connecting each corresponding pair of Mix Input and Split Output sockets is a stereo ganged 100kΩ potentiometer, which serves as that channel’s level control. (For the technically minded, there are also sets of bus resistors to help isolate the channels from each other).

In essence, plugging into a Mix input disconnects that channel from the Split bus, while plugging into a Split output disconnects that channel from the Mix bus. So, with nothing connected to any of the Mix inputs, a source connected to the Split input is distributed to all four Split outputs, with each output having its own independent level control.

Similarly, with nothing connected to any of the Split outputs, the four Mix inputs reach the mix bus to appear at the Mix Output, with their relative contribution levels set with the corresponding level controls.

Alternatively, if a source is connected to a Mix input and the corresponding Split output to a destination, that signal path is completely isolated from both the Split and Mix buses, and the signal is simply passed straight through via the rotary level control. 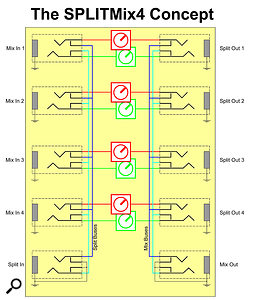 The user-manual supplied with the SPLITMix4 doesn’t contain a schematic diagram, but it does illustrate nine different wiring configurations combining various mix, split, and direct level-control scenarios. For my application, I’ve connected two stereo keyboards to inputs 1 and 2 (with independent mix levels controlled by knobs 1 and 2), and then looped the Mix Out to the Split Input so that I have duplicated outputs available with independent level controls on Split Outputs 3 and 4. The first goes to a stereo DI box for the FOH sound feed, and the second to a pair of local, powered monitors. It’s a very compact solution that needs no power, adds negligible noise and distortion, can’t be overloaded, and sits neatly on the top of the master keyboard within easy reach!

As with any passive signal path solution, there are some technical caveats. For a start, the input and output impedances vary considerably with the configuration and volume control settings: the input impedance ranges from 25-100 kΩ, and the output impedance from 1-4 kΩ. Secondly, there’s some inherent loss of level through the unit, even with the level control at maximum, typically amounting to around 12dB. Consequently, this unit is only practicable when used with active electronic sources and destinations that have very low source impedance and high input impedance. So we’re basically talking here of electronic keyboards, drum machines, mixers, powered speakers and recording devices; it can’t be used directly with microphones or electric guitars as sources, or with headphones or passive speakers as output devices. It’s also important to keep cables as short as practical to avoid the potential loss of high frequencies.

These minor technical considerations aside, the SPLITMix4 is a fantastically versatile and well-made little unit that makes a brilliant problem-solver wherever it’s necessary to combine, distribute, or control the level of a number of unbalanced mono or stereo signals. Its simplicity and relatively low cost belies the genius of its design. Highly recommended.