Mic manufacturers can sometimes seem to be stuck in the past — but not so Audio-Technica, whose innovative capsule technology yields impressive results! 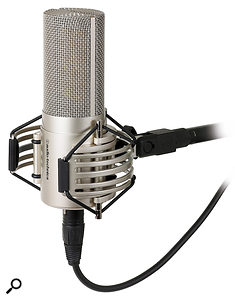 It has been suggested that microphone design is a mature technology, and there are certainly many manufacturers who trot out variations on the same tried and tested themes. However, the fact that the market is awash with vintage-style mics shouldn’t obscure the fact that there is also genuine innovation going on. Japanese manufacturers Audio-Technica have been at the forefront of developments, most recently with their new 50-series pre-polarised capacitor microphones.

The first of these was the AT5040 (reviewed by Hugh Robjohns in SOS December 2012 www.soundonsound.com/reviews/audio-technica-at5040), which introduced some striking new design ideas. Rectangular diaphragms in capacitor mics are not new — Swedish manufacturers Pearl and Milab have been producing them since the ’60s — but the AT5040 was the first to employ four of them, in an original and distinctive ‘Battenburg cake’ formation. This allowed the microphone to have a total diaphragm area much larger than would be possible with a conventional circular capsule, while largely side-stepping problems associated with diaphragm resonance.

Five years on, Audio-Technica have introduced a sibling microphone called the AT5047, and at first glance, you could be forgiven for wondering how it differs from the 5040. Apart from the colour scheme, the two mics look exactly the same, and both come with the same ingenious and effective magnetic shockmount described in Hugh’s review. Internally, the new mic uses the same quad rectangular capsule as its older brother, and its published frequency response plot appears identical. There are minor variations in other specs such as noise, maximum SPL and current draw, but these alone don’t explain why Audio-Technica felt it necessary to create a new mic.

Further inspection, however, reveals significant differences in the two models’ output stages. The AT5040 employed an innovative arrangement whereby the four capsules were connected as two pairs, one to the hot side of the balanced output and the other to the cold side. This meant that, in effect, the signal was fully differential all the way from the capsule to the mic preamp, with very minimal electronics, and helped achieve its impressively low self-noise figure of 5dB SPL.

However, it was found that some mic preamps struggled to cope with this design, which presented an unusually hot output of 56.2mV/Pa and an unusually low 50Ω output impedance due to its unique output driver configuration — although this low impedance can be argued to be a good thing as it helps when driving long cables and reduces the EIN (noise) figure of the connected preamp. The major change in the new mic is, therefore, the addition of an output transformer. This has been developed in-house specially for the AT5047 and, say Audio-Technica, brings about various changes compared with the 5040.

One is that the 5047 presents much less of a challenge to mic preamps, thanks to a 4dB drop in sensitivity (to 35.5mV/Pa, which is on a par with mics like DPA’s 4006, Groove Tubes GT67, Blue Baby Bottle, Brauner Pathera, Violet Black Knight, and so on), and a higher 150Ω output impedance. Another is that the maximum SPL handling is increased still further, from 142 to 148 dB SPL for one percent THD. Finally, Audio-Technica say that the presence of the transformer should manifest itself in a slight thickness and saturation, in contrast to the 5040’s extremely pure signal. The technical cost of these changes is a 1dB increase in self-noise to 6dB SPL, but even then, the 5047 remains among the quietest mics on the market.

Careful Where You Point That Thing

Like the AT5040, the 5047 is a fixed-pattern mic, with no switchable or optional features at all — not that it needs a pad to handle high-SPL sources. It comes in a neat and robust-looking hard case which also houses the shockmount, and both mic and mount are clearly built to extremely high standards. This is a very nice mic to hold and look at, never mind sing into!

The unusual arrangement of four rectangular diaphragms negates the resonances inherent in large round diaphragms, and yields a remarkably low self-noise figure of 6dB SPL.I didn’t have an AT5040 available for direct comparison, but would endorse most of Hugh’s findings about the 5040 as applying to the new mic too, with the exception that I didn’t encounter any untoward subsonic noise. One thing that’s immediately noticeable is its distinctive polar pattern. The directional pickup of most large-diaphragm mics varies a lot with frequency; typically, a mic that is cardioid at 1kHz will be more omnidirectional at low frequencies and will tend towards supercardioid or hypercardioid further up the spectrum. This tendency is particularly pronounced in the AT5047, and although it is nominally a cardioid microphone, in practice its high-frequency pickup is very ‘beamy’. To put it another way, what this means is that there is a relatively small on-axis sweet spot, and moving even a little way to the side causes the high-frequency response to drop off drastically, while sound arriving from the sides or rear of the mic is much, much darker than on most cardioid mics.

So, although Audio-Technica are marketing the 5047 as a general-purpose studio microphone, it’s not suitable for anything that demands a wide pickup angle. In many drum overhead configurations, for example, parts of the drum kit would be out of the sweet spot and would thus sound dark and dull. Likewise, 5047s wouldn’t be much use in a stereo array such as X-Y or ORTF, because any source in the centre of the stereo field would be effectively off-axis to both mics. On the plus side, however, rejection of sound from the rear is subjectively a lot greater than on most cardioid mics.

This is a mic that needs to be pointed straight at whatever it’s recording, then; but when you do so, you soon appreciate its good qualities. Broadly speaking, the sound of classic large-diaphragm capacitor microphones tends to fall into two schools. On the one hand, there’s the Neumann sound typified by the U87, which offers a slightly forward mid-range that can be warm, thick, punchy, hard or occasionally honky depending on the mic and the source. On the other, there’s the AKG sound exemplified by the original ‘brass ring’ C414, where the mid-range is less prominent and there’s a pronounced sparkle further up the frequency spectrum.

The AT5047 is distinctly different from both, and also from the Pearl/Milab models I’ve tried, which tend to be on the dark and warm side. Subjectively, in fact, it’s rather more neutral than most large-diaphragm capacitor mics, yet it is anything but sterile or lifeless. There might be a hint of steel right in the middle of the mid-range, and a breath of air at the top end, but overall, this is the very opposite of those hit-or-miss mics that sound great on a few sources and lousy on others. Rather, it’s a mic that simply shows off the good qualities of the source, and as a consequence, it seems to work well on pretty much everything that can fit within its sweet spot. The lack of objectionable resonances means that the sound doesn’t fall to pieces if you apply lots of EQ — but the mic’s basic excellence meant I rarely felt the need to apply EQ beyond the usual high-frequency lift on the master bus. The AT5047 has that rare quality of making everything sound like itself, yet at the same time, it imbues sources with a sense of confidence and authority that means they seem to hold their own effortlessly within a crowded mix.

This is not a cheap microphone by any stretch of the imagination, and its fixed, rather laser-like polar pattern arguably compromises its versatility in some ways. From the point of view of vocal recording, however, I’d argue that the AT5047’s neutral and open tonality actually makes it more usable on more different voices than many rivals. It shines in other roles too, but if you’re in search of a seriously good mic for sung and spoken vocals, the AT5047 should be pretty near the top of your shortlist. I shall be sorry to let the review mic go!

There are many excellent microphones available in the 5047’s price range, including, of course, its sister mic the AT5040. Other innovative mics that go beyond the familiar Neumann and AKG heritage designs include the Pearl ELM-C and Priority, the Milab DC96C, the Josephson C716 and the Ehrlund EHR-M.

Innovative, beautifully engineered and great-sounding, the AT5047 thoroughly merits its flagship role in Audio-Technica’s mic range.