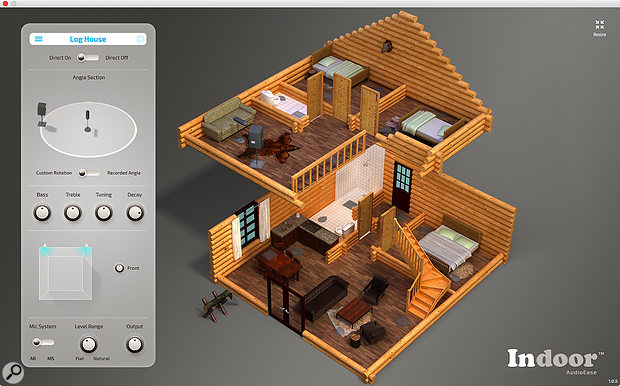 With yachts, SUVs and auto garages on the menu, Indoor is not your ordinary reverb.

AudioEase’s Altiverb was one of the first commercially available convolution reverb plug-ins, and arguably remains the yardstick by which others are judged. Not only does it come with a superb library of impulse responses, but successive versions have added innovative features that have greatly increased its flexibility. Unsurprisingly, it has proved popular not only in the music world, but also in the sphere of post-production. Now AudioEase have set out to create a convolution plug-in that is specially designed for post — but will Indoor likewise cross boundaries and prove useful in music production?

Most convolution plug-ins are available only in native formats, and are restricted to stereo-in/stereo-out operation at best. Indoor, by contrast, supports the AAX DSP format used by Pro Tools HDX as well as all the usual native standards on Mac OS and Windows, and is designed to operate with a wide variety of surround formats. Host permitting, these include 7.0 and 7.1 DTS and 9.0 and 9.1 Dolby Atmos, and we’re talking much more than just basic surround compatibility: Indoor makes it easy to localise sources within the space, providing directional as well as ambience cues to enhance the realism of what you’re hearing.

One of the most striking features of Indoor is its graphical user interface, which achieves the rare feat of being both visually stunning and highly intuitive. AudioEase have ‘sampled’ 10 different structures, ranging in size from the interior of a 4x4 to a large auto garage, and taking in houses, a restaurant, a hotel room and a yacht along the way. Not many presets, you might think — until you discover just how exhaustively each space has been sampled. Not only have AudioEase used two different surround arrays — a double-M-S coincident array and a four-mic spaced array — along with an additional pair of omnis for height information, but they’ve recorded a staggering number of combinations of mic and speaker position.

Selecting a space from the preset list brings up a large and beautifully rendered isometric cutaway representation of its interior, with wall and door positions clearly visible. Each room also contains ghostly loudspeaker and mic icons. Click on a room, and these are filled in, indicating that you are now hearing both source and mics within that room. However, AudioEase have not only recorded impulse responses within every room, but for every combination of different rooms, with doors open and closed. So, at a click, you can move the mic or loudspeaker to a different room. Recreating the effect of overhearing a kitchen conversation from the upstairs bathroom thus takes but a single mouse click, and nice touches abound, such as the little warning triangle that appears if the position you’re hovering the mouse over will result in a large level change. You can even click on a car stereo or television and have the source audio emitted through its lo-fi speakers!

For music production, Indoor can be employed as a conventional reverb effect in Direct Off mode, where a Spread control determines how closely the reverb ‘follows’ each input source: select a narrow Spread setting, and the reverberation will come across as a halo of sound around the source, while the link between source position and reverb intensity is progressively reduced at wider settings. However, to position sources with maximum realism, it’s better to use Indoor as an insert processor and select the Direct On mode. This enables the Angle Section, whereby you can rotate the virtual loudspeaker through 360 degrees around the listening position. The effect is extremely convincing, and makes it very easy not only to place sources convincingly within the room, but to follow their movements. In either mode, the choice of spaced or coincident array makes a very noticeable difference to the results, with the former offering much lusher and richer, more enveloping reverberation and the latter providing pin-sharp localisation. Simple two-band EQ, decay time and tuning controls are also available in both modes. 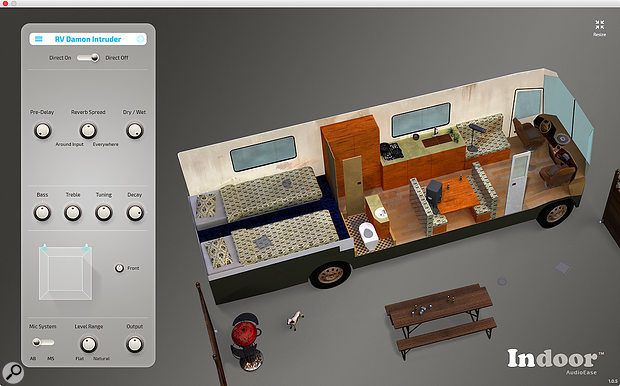 In Direct Off mode, Indoor behaves more like a conventional reverb — though not many IR libraries include an exhaustively sampled camper van.

In a nutshell, the Direct On mode and the Spread setting in Direct Off mode offer two different ways of positioning the sound source within the room. The effect is not as lifelike in the latter, but you can plumb as many sources as you like into one instance of the plug-in and position them all within the same space, and it gives you control over wet/dry balance. You might, for example, choose to use separate instances of Indoor as inserts on the most important foreground voices and SFX in a busy scene, while using another instance as an auxiliary effect in Direct Off mode for less important Foley and background sounds. Whichever approach you adopt, you can be confident that any Indoor parameter you automate will respond smoothly and without glitching or zipper noise.

From the moment you first load it into your DAW, it’s obvious that Indoor is a premium product, so it’s no surprise to find that it commands a premium price. Despite this, it surely represents a no-brainer for anyone working in post-production. It’s the first and only convolution reverb I know of that lets you realistically position and move sources with such simplicity, and its beautifully thought-out user interface makes it an absolute pleasure to use. In terms of what is possible with Indoor, the best comparison is not to other convolution reverbs but to algorithmic plug-ins such as Flux’s IRCAM Tools Spat; and although Spat is more open-ended, it’s also much less intuitive. Indoor gives you great results instantly, yet is flexible enough to cope with a huge range of possible mixing scenarios.

So, to return to the question I asked at the start of this review, does it also have a place in music production? Well, up to a point, m’lud. Certainly, if you have Indoor installed, you’ll end up using it in a music mix sooner rather than later. Quite a few of the spaces that are sampled here work well in a conventional reverb context, from tiny bathroom ambiences to the wide open auto garage, and although realistic placing of sources in domestic environments isn’t a core part of music mixing, it can be valuable as a means of creating special effects. If the sampled spaces included live-sound venues and concert halls, Indoor would also be useful for mixing live recordings — but there are good reasons why they don’t. Music production is a secondary consideration here, and rightly so. If you want a top-class reverb for music mixing, AudioEase already make one of those; what makes this product great is precisely the way it’s tailored to the needs of the post-production market.

In targeting the post-production market, AudioEase have done much more than capture relevant impulse responses: they’ve created a new and beautifully thought-out way of positioning sound sources within these spaces.