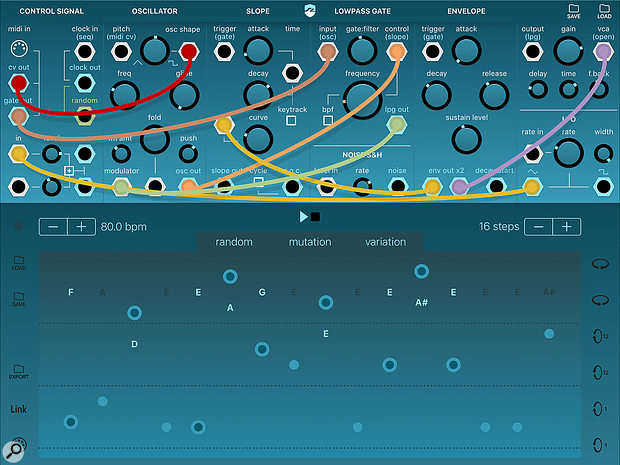 With Apple’s AU plug-in format for iOS finally beginning to gain some serious ground, I reviewed the excellent Troublemaker from developer Bram Bos in SOS April 2017 issue. Bram’s latest offering is a further AU-friendly synth app: Ripplemaker. The app is described as a semi-modular synth with a ‘West Coast’ flavour (in contrast to an ‘East Coast’ take on synth design, with the filter section being perhaps the most obvious difference) and, in a very Reason-esq fashion, lets you configure your own audio routing options between the various modules within the synth engine. This is great fun to explore and experiment with and, as an introduction to modular synthesis, Ripplemaker is a fairly gentle ride.

A quick glance at the UI shows some design similarities with Troublemaker, most notably in the excellent mini-step sequencer that occupies the bottom half of the display when the app is used in stand-alone mode. This includes very clever options for adding semi-random variations to your patterns and, as it is easy to get MIDI out of the app (including saving pattern presets), it’s easy to port your sequences to a full-blown sequencer.

The inputs and outputs within the synth engine’s various modules are suitably colour-coded, making connections easy to explore. In terms of the modules themselves, the UI is divided in to the Control Signal, Oscillator, Slope, Low-pass Gate, Noise S&H, Envelope and LFO modules. The main outputs — along with a post-synth-engine delay effect — are located top-right. The Slope section adds complexity to the Oscillator, while the Low-pass Gate section brings that somewhat different ‘West Coast’ approach to the idea of a filter.

While the interface is excellent, the sound is even better. The collection of presets spans a wide range of sounds, from juicy basses through arp-tastic leads and into weird drones. It might be a monosynth and, yes, there are bigger and badder synth engines out there, but Ripplemaker is just fabulous as a sound source. You can, of course, save your own sound presets as well as MIDI pattern presets mentioned earlier.

I had no technical issues using the app. It ran in Cubasis, AUM, Audiobus 3 and stand-alone without a glitch or hitch. It accepted MIDI in happily and, if you want to use external control with the app, it has excellent support for MIDI CC automation. Ableton Link, MIDI Clock and WAV export are all also supported.

Ripplemaker is just as good as Troublemaker, and Bram Bos are fast becoming one of the most interesting iOS music app developers. I can only imagine that both of these products would do equally well in the desktop world (fingers crossed on that front). The app is universal, requires iOS 9 or later and, at the current asking price, is an absolute bargain.