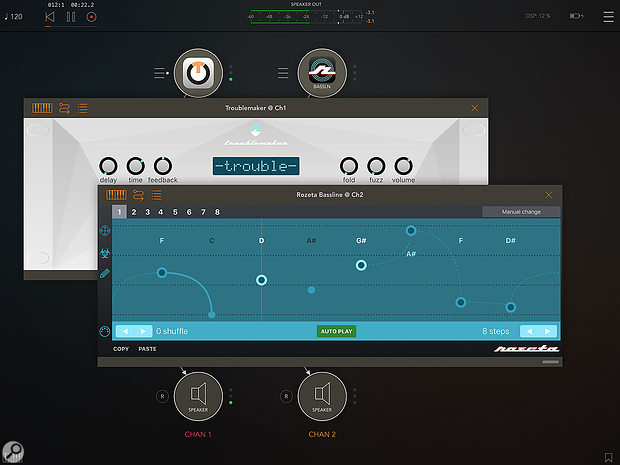 I’ve reviewed a couple of iOS synth apps — Troublemaker and Ripplemaker — from developer Bram Bos recently and both were brilliant. And both include really neat — and very creative — pattern-sequencing options. However, the sequencer elements are only available when the apps are running stand-alone and not when they are run as AU plug-ins within a suitable host. However, Bram has now addressed that and, it has to be said, offered something extra on top with his latest app release: Rozeta Sequencer Suite.

Purchased as a single app, Rozeta is in fact a suite of six MIDI sequencer tools that run as AU-only plug-ins within a suitable AU-host. Rozeta is also a bit of a first (at the time of writing at least) in that it makes use of one of the new features Apple has snuck rather quietly into the iOS 11 update: the ability for AU plug-ins to send MIDI Out data. (The other key new feature is that AU plug-ins can now be displayed full-screen; that might make it much easier for developers of existing apps to add AU support.) This does require an AU host that has also been updated to support the MIDI output option. At present, Kymatica’s AUM is the most high-profile host to do that...

All of the six AU plug-ins within the Rozeta suite are essentially MIDI generators. They make no noise themselves but must have their MIDI output routed to any suitable synth or drum app to do something useful. Rozeta Bassline provides a mono-sequencer, much like the one found in Troublemaker. Rozeta Rhythm is a Euclidean drum sequencer, set up to work with any drum app. Rozeta X0X is a classic Roland-style step sequencer, with triplets and polyrhythms. Rozeta LFO provides three MIDI CC LFO generators (and, as you can use multiple instances, you essentially have unlimited LFOs). Rozeta XY is a configurable X-Y pad controller with pitch-bend and mod wheel support. Finally, Rozeta Arpeggio provides a compact arpeggiator that can (MIDI routing permitting) be used with any synth you own.

The sequencers include Bram’s usual ‘random pattern generator’ function (great for a bit of random inspiration) but the really cool thing is that each sequencer instance allows you to store up to eight patterns and you can switch between these on the fly either manually or via MIDI. This is obviously very useful in the context of a full ‘song’-style production.

Using AUM as my AU host, I had no problems using any of the six plug-ins, and configuring the required MIDI routing was a breeze. While I particularly like Bassline, the Euclidean drum sequencer is also a lot of fun and comes with MIDI mapping presets for some of the more popular iOS drum apps. Equally, both the LFO generator and X-Y pad options are great for adding some real-time sound control to your favourite synths, providing, of course, they offer suitable MIDI learn features.

If you are into MIDI-based music creation on iOS, Rozeta is an absolute bargain. And if you have not yet discovered Bram Bos’s other iOS music apps then, like Rozeta Sequencer Suite, they all come highly recommended.