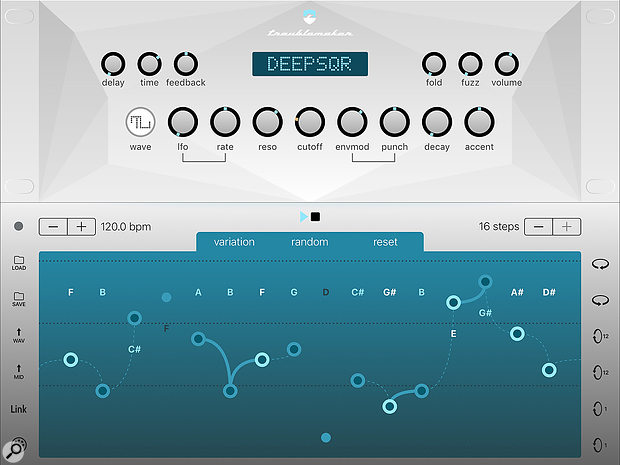 Troublemaker’s controls will be familiar to anyone who likes a spot of acid, but the phrase sequencer is all its own.

With Apple’s AU plug-in format for iOS finally beginning to gain some traction, there are a growing number of music apps appearing that support the format either in addition to the Audiobus/IAA option or simply as AU-only. Developer Bram Bos already has a couple of AU-friendly drum synths in Ruismaker and Ruismaker FM plus an FM synth in Phasemaker, and all have been well received. However, his latest offering is Troublemaker and this supports all these formats as well as running in a stand-alone mode.

The interesting tagline for the app is ‘Troublemaker: this is not a 303’, which, of course, means that Troublemaker most certainly is meant to be in the same sonic ballpark as Roland’s classic TB-303 bass synth. What Bram is actually getting at is that this is not a 303 clone because, while the app does attempt to model the waveform and filter behaviour that helped the 303 define a whole new genre of electronic music, it also offers plenty more. In this case, that’s a pretty slick user interface, a set of additional, more complex, oscillator waveforms and, when running in anything but the AU format, a rather clever ‘phrase sequencer’.

Does it sound exactly like a 303? Well, I’ve not had the chance to do a direct comparison, but I’m not sure that really matters; Troublemaker sounds great on its own terms. It certainly does capture the essence of the 303 magic whether you want raspy or rubbery and it does plenty more besides. And, hooked up to something other than your Apple earbuds, it also pumps out an impressively big sound. The control set is compact but still offers the user enough programming options to keep things interesting. 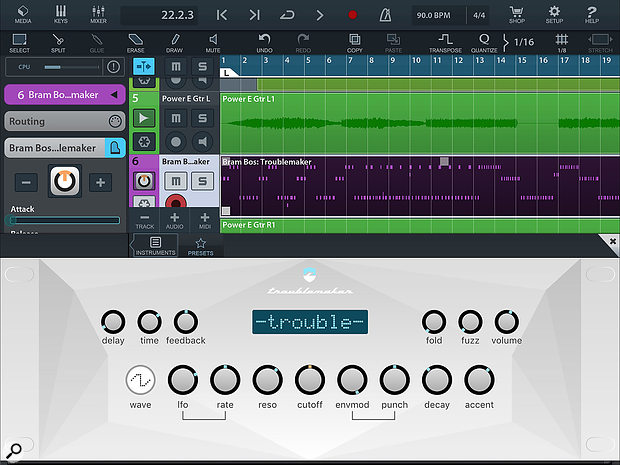 Troublemaker includes AU support so you can run multiple instances within a single project in a suitable AU host.

While most punters will be focussed on the sonic options, don’t overlook the mini step sequencer. This allows you to quickly create sequences between one and 16 steps, but the clever bit is how the design exploits the touch-screen to make sequence creation so easy. Sequences can be saved/recalled and, rather neatly, exported as either audio or MIDI. So, while you don’t get the step sequencer when using the app as an AU plug-in, you can simply export MIDI files from the stand-alone version into your iOS DAW/sequencer of choice (and this worked great for me with Cubasis) and arrange them there for playback via the AU version. The step sequencer also includes a very clever ‘mutation’ option that will add different elements of random variation to your sequence as it loops; very cool and can bring some great variety to even the most basic of loops.

There are perhaps a couple of additional things it would be great to see. Sound presets in the stand-alone version would be nice (they are available in the AU version) and, while all the synth parameters are mapped to MIDI CC numbers for external control (and this is fully documented in the PDF manual), a MIDI Learn system would be nice. Otherwise, the app plays nicely with external MIDI kit, supports MIDI Clock sync and (perhaps more importantly for the world of iOS), Ableton Link. Anyway, Troublemaker is absolutely no trouble at all to heartily recommend. Not a 303... more a ‘303+’ for the mobile musician and well worth the price of entry.