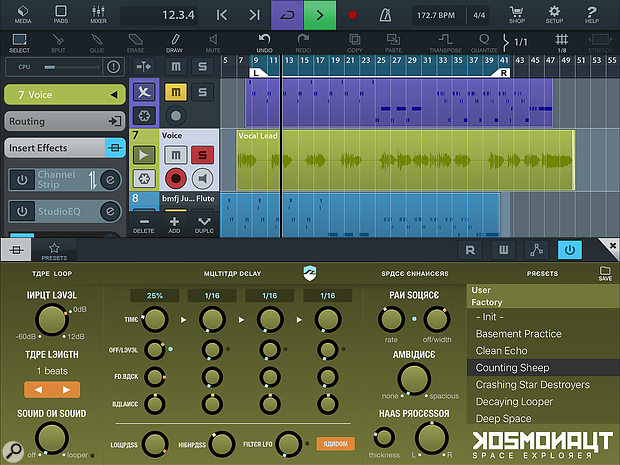 Kosmonaut running as an AU plug‑in.

For long‑standing iOS music app fans, developer Bram Bos will need little by way of introduction. I’ve reviewed a number of his apps here before, including the excellent Troublemaker and Ripplemaker. Both of these are synths and, if there is such a thing as a ‘must purchase’ app, then both easily tick the box. Bram was also an early adopter of Apple’s AU plug‑in format for iOS, so they are a breeze to integrate into your workflow with a suitable AU host such as Cubasis, AUM or Auria Pro.

More recently, Bram has turned his attention to some iOS AU effects and Kosmonaut is his take on a delay effect. Like Troublemaker and Ripplemaker, the GUI is both a cool design, easy to use in the compact mobile format and packed with features. In this case, we get a combination of tape saturation (built into the Input control), looping (via the Sound On Sound control), four delay lines each with independent control over timing, level, feedback and balance, various filter options and a few added extras in the form of reverb and a Haas effect. The app ships with an excellent collection of presets to demonstrate what’s possible, options to save your own, a Random button for when you are feeling experimental, and the ability to automate all the key parameters.

I gave the plug‑in a run out within both Cubasis and AUM and had no technical issues. If you just want some clean, simple delays, then Kosmonaut can easily do that, and it sounds very good on sources such as vocals or lead lines. However, there are enough options that you can also get very trippy if you wish. For example, apply one of the more complex presets to even a simple drum loop and all sorts of interesting things can kick off. Those with a more experimental streak will enjoy the possibilities.

While the control set is relatively straightforward, I suspect each control is actually influencing multiple parameters under the hood. For example, the Ambiance knob, which adds a reverb effect to the delays, goes from ‘none’ to ‘spacious’. This essentially provides a very nice algorithmic reverb effect but you don’t just get ‘more’ as you turn the knob clockwise; it also changes the character of the reverb in a very pleasing way. The Haas effect is also interesting, although do remember to de‑centre the pan control for this if you actually want to hear it doing anything.

At such a modest price, Kosmonaut is very much in the casual purchase bracket, but this is yet another iOS music app that defies the ‘you only get what you pay for’ cliché. The audio quality is excellent and this is another iOS plug‑in I’d love to see in a desktop format. Top‑notch stuff from a top‑notch iOS developer.