Since DAW software and multi‑channel audio interfaces took over the recording world, rackmount patchbays have become a far less common sight in the project studio, but there are still plenty of situations where a patchbay might be useful. You may, for example, want to access insert points, or to bring some of those extra line ins and outs on the back of your audio interface out to the desktop. If you only need a handful of such connections, ART's TPatch (part of their 'ARTcessories' range) might appeal, as its aluminium case is no larger than a typical DI box, and it sits comfortably on your desktop, rather than in a rack. 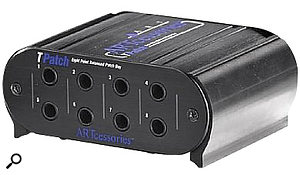 The TPatch is a passive, eight‑point balanced patchbay of quarter‑inch TRS jack connectors. The user can select between normal and half‑normal modes of operation, using separate rear‑panel buttons for each vertical pair of sockets. In normal mode, the cables you plug into the back of each of the four pairs of in/out sockets are electrically linked together, unless you plug cables into either socket on the front of the unit. This provides essentially the same function as a mixer insert point: the signal flows through the channel unless a cable is connected to re‑route the flow via an external processor.

Half‑normal is a common variation that breaks the internal link if you plug a jack into the lower socket (designated an input) but the link remains unbroken if you plug in only to the top socket (output), which effectively allows you to split off a signal feed from an insert point without breaking the loop.

This is all fine if you want the patchbays to connect to insert points, or to provide one between two pieces of equipment, but there's no official way of switching off the normalising altogether — which you might want to do if you simply want to use all eight sockets as additional inputs and/or outputs for an interface or mixer. Fortunately, there's a simple cheat (not mentioned in the instructions) that allows you to do this without modifying the unit. Usually, the panel with the switches is the back, and is used for the permanent connections to the gear you want to access. If you turn the unit around, so the switches are on the front, as long as you have jacks connected to both sockets in each vertical pair (on what is now the rear panel) the normalising path between the upper and lower sockets will be broken, allowing the patchbay to function as eight independent access points rather than four linked pairs. You can then plug your patch cables into the new front panel (now with the switches), to access the eight jacks without having to worry about the automatic linking feeding an output back to an input. In all, this is a neat and effective device, although they really should have told you how to use it non‑normalised. Paul White