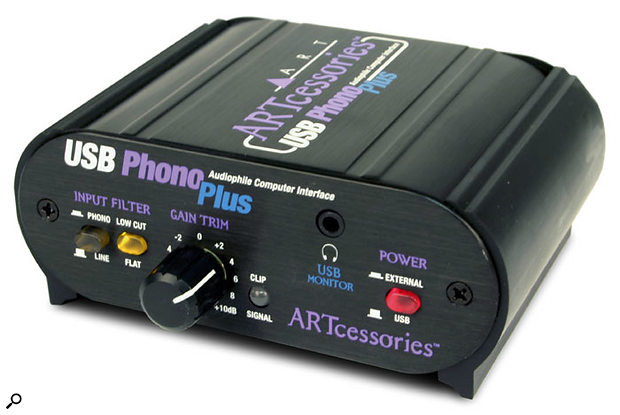 Most computer audio interfaces don't offer the RIAA EQ needed to attach a turntable directly, but ART's neat problem-solver is designed to do just that.

To bring the worlds of vinyl and computer audio closer together, ART have come up with a cost-effective phono preamplifier with built-in RIAA equalisation and a preamp stage for magnetic pickup cartridges. They have added a USB audio interface, headphone monitor amplifier and S/PDIF digital I/O, and there's also a stereo line output prior to the USB interface. Switches bypass both the internal RIAA equalisation, making the RCA phonos work as line-level inputs, and the low-cut (-3dB at 22Hz) 'rumble' filter, allowing the USB Phono Plus to be used for more general audio interfacing tasks too.

Housed in a metal case little larger than a DI box, the USB Phono Plus has a gain-trim knob and dual-colour signal/clip LED on the front panel alongside the two aforementioned switches. The unit can be powered over USB, from the supplied adaptor or from any DC source between 7 and 12 Volts or any AC source between 9 and 12 Volts. No USB cable is supplied but any standard USB cable will work.

All the connections, other than the headphones mini-jack for monitoring the USB return from the computer, are on the rear panel, but it's worth noting that there is no analogue output post-computer other than the phones jack. The RCA phono outs come from the RIAA preamp before the USB interface, and are intended for monitoring the source or for allowing the record-deck signal to feed to a separate recorder requiring analogue inputs. RCA phonos are also used for the turntable inputs, and as is conventional with phono preamps, there's a grounding terminal to which to connect the turntable metalwork. Both optical (Toslink) and coaxial S/PDIF inputs are provided, but the digital output is optical only. The coaxial input overrides the optical input when used.

With a frequency response of 10Hz to 50kHz within half a dB either way, a THD of 0.01 percent typical at 1kHz and a noise floor 90dB below clipping, the USB Phono Plus is capable of doing a worthy job of transferring vinyl to computer, though the sample rate is limited to 44.1kHz or 48kHz and the resolution is just 16-bit. This isn't a problem if you record as hot as possible without clipping, but it's not quite as forgiving as 24-bit encoding. The USB 1.1 interface is compatible with Windows 98SE or later, Mac OS 9.1 and OS X, and will work with the audio device drivers built into Windows 98SE, Me, 2000 and XP and with any Apple computers that have USB support. No additional drivers are necessary, though ART do include a CD-ROM containing the audio freeware program Audacity, which is a simple stereo wave editor with some effect plug-in capability.

I tested the USB Phono Plus in Logic Pro and it showed up immediately in my audio drivers list as a USB Codec without me having to install anything. The time from unpacking the unit to recording my first piece of vinyl must have been under two minutes. The audio quality was surprisingly sweet and noise-free, and the performance of the Phono Plus with the old record deck I'd found in the basement surprised me. The only frustration for me was the lack of an audio output other than the headphones; to play the recording back over my monitors, I had to switch back to my usual recording hardware. In Mac OS X, you can of course create an Aggregate Device, which allows you to monitor via one piece of hardware while recording through another, but given everything else this little box can do, it seems an odd omission. Other than that, the ART USB Phono Plus worked exactly as claimed, providing an ideal way to transfer vinyl to computer with the minimum of hassle.

If you just want to connect a record deck to your computer, Terratec's Phono Preamp Studio USB is the obvious competition: it can also be switched to line level when required, and comes with free de-noising software, but has no digital I/O. There are also more general interfaces that offer phono preamps, such as the new PreSonus Inspire, but as you'd expect, these tend to be more expensive.

This is a very practical way to get your vinyl collection into the computer, and given that it is a budget product, the audio quality is surprisingly good.