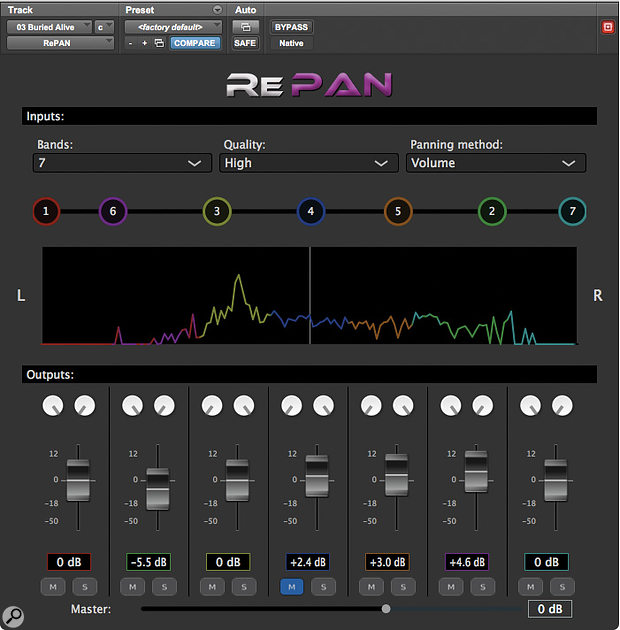 The idea of dividing a stereo mix into its constituent elements on the basis of pan position is, conceptually, easy to grasp. When we hear that the lead vocal is panned to the centre, the acoustic guitar is all the way to the right-hand side and the shaker somewhere in between, it seems natural that we should be able somehow to slice up the stereo field and isolate those elements. In reality, however, the 'stereo field' is an illusion, and there's no simple way to dissect a stereo file to extract the source that appears to occupy a given position.

No simple way, that is, from the point of view of those toiling at the DSP coalface; but thanks to RePAN from AudioSourceRE, there is now a way of performing pan-based source separation that is simple from the user's perspective. This technology made its public debut in the company's impressive DeMIX Pro package, which I reviewed in the March issue, as part of a full suite of source separation tools. These also include both automatic and 'guided' vocal extraction and drum extraction, as well as a Retouch-style spectral editor, and they are capable of remarkable results in the right hands. The flip side of this is that these results are not available instantly: even the automated extraction algorithms require a fairly lengthy upload and cloud-based server processing, and the guided vocal extraction demands plenty of time and attention.

RePAN offers only one of the tools that is in DeMIX Pro's palette, but has the huge plus of eliminating all that waiting around. Whereas it can take several minutes to hear the results of your chosen settings in DeMIX Pro, RePAN reports a latency of just 4096 samples and responds instantly to parameter changes. And unlike DeMIX Pro, it's also usable within a DAW, being a native plug-in that's available in all the major Mac OS and Windows formats.

RePAN couldn't really be simpler to use. It is, for obvious reasons, only available in stereo-in/stereo-out format, and three input settings let you choose High or Low Quality, the number of bands that you want to divide the input signal into, and whether you wish to use Volume alone or Volume & Time as a basis for separation (the former is optimised for material mixed from mono close-miked sources, the latter for cases where multiple sources were miked with a stereo pair). Each band is then depicted as a coloured circle; by default, these are equally spaced along a line representing the stereo field, but they can be freely dragged around and even crossed over if you like. An animated display depicts the input signal, helpfully coloured to show which parts of it are assigned to which band.

The lower half of the plug-in interface consists of a simple mixer, designed to allow the bands to be rebalanced either in terms of level or pan position. Each band thus gets a fader, mute, solo and left/right pan controls, and there's also a master fader. Slightly to my surprise, RePAN allows every parameter to be automated within the host DAW, including those you wouldn't expect to be automatable, such as Number Of Bands and Panning Method, and it does a valiant job of keeping playback smooth even when you do so.

This Is Pan Hot

Instant gratification is the name of the game here, then, and RePAN provides that in spades. The most obvious application is to mute or attenuate whatever's panned centrally, in order to create instrumental backing tracks and the like. This is both simple and incredibly effective: you just mute the centre band and drag its neighbours left or right to vary what's counted as 'central'. Of course, RePAN can't selectively attenuate one centrally panned element such as the vocal, while leaving alone others such as bass or snare drum; and nor can it eliminate a vocal quite as thoroughly as the dedicated algorithm in DeMIX Pro. But the process is almost instant, highly effective, and on most material, remarkably free of artifacts. It's worlds apart from the old trick of matrixing the signal to Mid-Sides and muting or attenuating the Mid channel, and it's so easy to use that you could happily operate it in real time to create backing tracks on the fly at a karaoke night or similar.

More subtle applications are also possible, and as with DeMIX Pro, I think this is a product that will very much interest mastering engineers. By leaning on the faders slightly you can, say, bring up the level of a centrally panned lead vocal to compete with over-loud harmony voices, or attenuate that annoying percussion instrument that's sitting somewhere to the left of the guitar. All this can be achieved without noticeable processing artifacts, as can wholesale 'reordering' of the stereo field, should you decide that the guitar and hi-hat would be better swapping places.

It's hard to find anything to criticise either in the functionality of RePAN or its plug-in interface, which is slick and intuitive; however, as I used it more, I did wonder whether there might be scope for a couple of additional features. For instance, it would be an even more powerful plug-in if you could introduce DJ-style band-splitting EQ in the mixer. This would, for example, allow you to mute the centre band above a certain frequency cutoff point, so making it possible to preserve low bass information while removing a vocal or vice versa. I also wondered if it might be feasible to make each band output its signal to a separate channel in the host program's mixer, as is possible with multitimbral software instruments; again, this would enable more advanced processing of individual bands. Don't get me wrong, though: RePAN is already a powerful and polished product, and one that is as far as I know unique. What I'm asking for would just be another layer of icing on a very tasty cake!

RePAN packages cutting-edge technology in an impressively simple interface, performing real-time, pan-based source separation that is not achievable any other way.