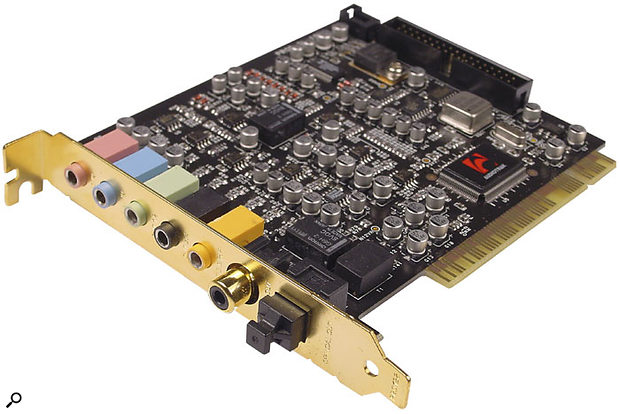 Audio interface products from ESI Pro (formerly known as Ego Systems Inc) have been the subject of a couple of recent Sound On Sound reviews, where Martin Walker looked at the Wami Rack 192X in October 2002 (read the review on-line at www.soundonsound.com/sos/oct02/articles/esipro.asp) and Waveterminal 192M in March 2003 (www.soundonsound.com/sos/mar03/articles/esipro.asp). Both of these products are aimed squarely at the recording musician and, at their respective price points, each offers a interesting balance between features, audio quality (excellent in the top-end Wami Rack) and affordability.

For the software-based studio, however, perhaps the most significant feature of these two ESI Pro units is the combination of multi-client EWDM drivers and Direct Wire software patchbay, which together provide unrivalled flexibility when running multiple audio applications through a single soundcard. For those whose input/output needs are not as sophisticated (or whose pockets are less deep), under their Audiotrak brand, ESI have now put the same EWDM/Direct Wire technology into what they are advertising as a 'multimedia' card: the Audiotrak Prodigy 192. 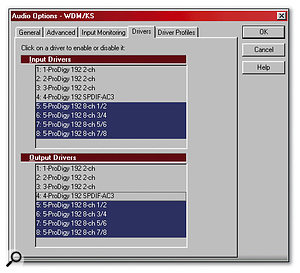 The Prodigy's EWDM drivers appear as stereo pairs and multi-channel formats in audio applications such as Sonar.

With two analogue ins and six outs on stereo mini-jacks, the hardware is clearly not as sophisticated as that of either the Wami Rack or Waveterminal. At under £100, the 'multimedia' nature of the analogue hardware is an obvious cost constraint, but given due care and attention, it is perfectly possible to make respectable audio recordings via mini-jack connectors. Moreover, both optical and co-axial digital outputs are included and 24-bit/192kHz audio is still supported (although only 192kHz is only supported on playback, with 96kHz being the highest sampling rate available for audio recording). A big plus is the inclusion of the EWDM/Direct Wire drivers that Martin was so obviously impressed with when reviewing both of the ESI Pro units mentioned above.

A summary of the Prodigy 192's features is provided in the Brief Specification box. Both mic and line-level analogue inputs are provided, although it is an either/or arrangement and they can not be used simultaneously. The six-channel analogue output is obviously aimed at 5.1 playback and Cyberlink's PowerDVD Player is bundled with the Prodigy for those with a suitable DVD drive installed in their PC. The digital output can also send out AC3-encoded Dolby Digital audio.

If the user wants to overcome any limitations they might feel from the unbalanced mini-jack analogue inputs, one solution might be the optional MI/ODI/O add-on card (read MIDI I/O and Digital I/O). For a further £50 this adds a single 16-channel MIDI In and Out and digital I/O in both co-axial and optical formats, although it does require an additional backplate slot in the host PC. With the add-on card in place, the Prodigy 192 is able to operate as a four-in/eight-out device if both analogue and digital connections are utilised. 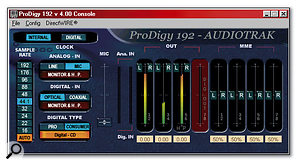 Having followed the usual procedures for installing the PCI card and add-on MI/ODI/O board, driver installation proved painless under both Windows 98SE and XP Pro. The Prodigy was supplied with version 3.8 of the EWDM (Enhanced Windows Driver Model) drivers, but I found the newer v4.0 on the Audiotrak web site. This driver package installs the EWDM Controller, EWDM Wave-1 to Wave-5 and the EWDM MIDI drivers. This is all very similar to the Waveterminal and Wami Rack — one driver fits all OS types, including 98SE, ME, 2000 and XP — and supports MME, ASIO, GSIF and Direct X. Within suitable audio applications, these audio drivers appear both as a series of stereo pairs and in a multi-channel form which could be used, for example, with surround sound-based projects.

One of the key features of the Prodigy's drivers is that they are multi-client, so that a single card can be accessed by multiple applications: a sequencer, soft synths, samplers and sound editors should all happily run side-by-side. The Console utility and the Direct Wire v2 patchbay operate in very similar fashion to those of the Waveterminal and Wami Rack, within the somewhat slimmed-down hardware specification of the Prodigy.

The Console provides monitoring level adjustment and selection of input sources, and allows the sample rate to be set. The Config menu also allows the latency to be set, in terms of the number of samples — this cannot be done from within your sequencer, as it can only be adjusted when the drivers are not in use. The Direct Wire patchbay allows signals to be routed from one application to other within the host PC. This is an excellent feature; for example, you might want to send the output from your stand-alone soft synth into your MIDI + Audio sequencer so you can add your favourite VST or Direct X effects to the sound — Direct Wire makes the life of the PC software studio owner considerably more straightforward. Both of these utilities have been described fully in the earlier reviews of the Waveterminal and Wami Rack, so it is probably sufficient to say that they work in essentially the same fashion here. 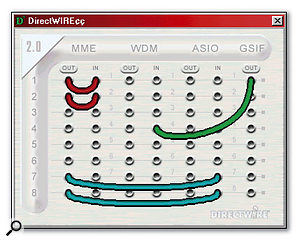 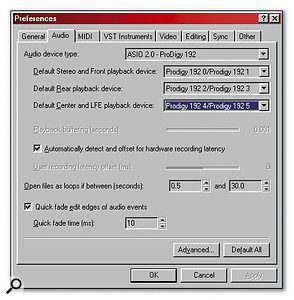 The multi-channel output of the Prodigy makes it suitable for 5.1 audio projects in applications such as Acid (as shown here) or Cubase SX.

Testing latency via the ASIO drivers in applications such as Reason and Cubase SX gave very good results. When working at 44.1kHz, I was able to select the lowest setting (48 samples) within the Console utility and achieve consistent, glitch-free playback of moderately busy mixes. This probably equates to a real-world latency of about 3ms, which is excellent for real-time use of any fast-attack soft synth/sampler patches. Sonar's Wave Profiler suggested a buffer size producing a 2ms latency, but even for a fairly simple arrangement of a few audio tracks, this loaded CPU usage to around 30 percent. Adjusting the buffer size to give a latency of 12ms (which is still perfectly usable) halved the CPU load for the same arrangement.

I tested the audio performance of the analogue line in and line out using Rightmark's Audio Analyser 5.0. At 16-bit/44.1kHz, RMAA returned a very respectable background noise figure of -93.8dBA. This fell to an excellent -96.1dBA at 24-bit/44kHz and then rose to -93.1dBA at 24-bit/96kHz. At this price point, there is nothing to be critical of here. In his review of the Waveterminal 192M, Martin Walker reported high stereo crosstalk measurements, but this was not such a problem here, with results between -84.1 and -87.2 dB — respectable, if not outstanding. Checking Rightmark's web site revealed a recent set of results posted for the Prodigy that were similar to my own figures, but with somewhat better background noise levels at 24-bit/96kHz.

Subjectively, recordings made with the Prodigy at 16-bit/44.1kHz were good and there was a noticeable (if subtle) improvement when moving up to 24-bit/44.1kHz, with a little more top-end clarity being the most obvious difference. Frankly, moving to 96kHz didn't produce any marked further improvements, but those serious enough about their audio to want 24-bit/96kHz recording and multi-channel playback are probably going to be spending more money than this in any case. Playback also seemed clear and clean, both in two-channel stereo and 5.1 surround. Indeed, multi-channel output worked very well in 5.1 projects created in applications such as Cubase SX or Acid Pro.

For those with suitable external A-D converters, the MI/ODI/O add-on card means the mini-jacks can be bypassed when recording, and the co-axial I/O produced good results for routine recording and playback tasks via my own Yamaha 01V mixer. The MIDI port also did exactly what it said on the tin.

While my own Echo Mia produces similar background noise levels to the Prodigy 192, in other respects (frequency response, dynamic range, total harmonic distortion, stereo crosstalk), its RMAA figures are better than those of the Prodigy and I felt this was borne out in some basic listening tests. The Mia produced more detailed results, most obviously with solo acoustic instruments such as guitar or a guitar/vocal combination. With busier mixes, the differences were perhaps less noticeable.

Of course, the Mia is more expensive and has balanced analogue I/O, but it doesn't have multi-channel outputs or Direct Wire and, as with any soundcard, the Prodigy's particular balance of features will suit some but not others. Perhaps a more direct comparison might be made with something like Creative's Audigy 2, which is about the same price and also supports 24-bit, 192kHz multi-channel playback. While the Audigy 2 includes MIDI as standard and a wavetable synthesizer, the Prodigy has its EWDM and Direct Wire technology. If the Audigy's synth was surplus to requirements for the software studio owner on a budget, the EWDM/Direct Wire combination might just tip the balance. 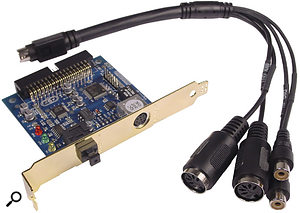 While I'd be more than happy for someone to convince me otherwise, on a soundcard costing under £100 and using unbalanced mini-jacks for analogue I/O, I think the idea of 24-bit/192kHz audio is more to do with marketing (and the ability to meet the required spec for playing back DVDs) than real differences in the listening experience of the potential user. At this price point, 44.1kHz recording at 16- or 24-bit is likely to be more than adequate and, for these tasks, the Prodigy 192 does a very respectable job — no better and no worse than other similarly priced, multi-channel PCI soundcards on the market.

However, where it is likely to benefit the recording musician most is in providing access to the EWDM/Direct Wire technology at a relatively low cost. Until other soundcard manufacturers catch up on this front, this gives ESI/Audiotrak products something of a distinctive feature set. For the home musician whose entire studio (bar a mic, guitar preamp and keyboard) is contained within their PC, these drivers make combining sequencers and software instrument applications within the same computer so much easier. If this is you and your budget is tight, or you are just not yet ready to take the plunge with something offering more comprehensive in terms of balanced analogue I/O or professional phantom powering, then the Prodigy 192 is well worth a closer look.

The audio performance is respectable for a budget multi-channel PCI card, but the Audiotrak Prodigy 192's biggest selling point for the PC software studio is affordable access to the excellent EWDM/Direct Wire technology.