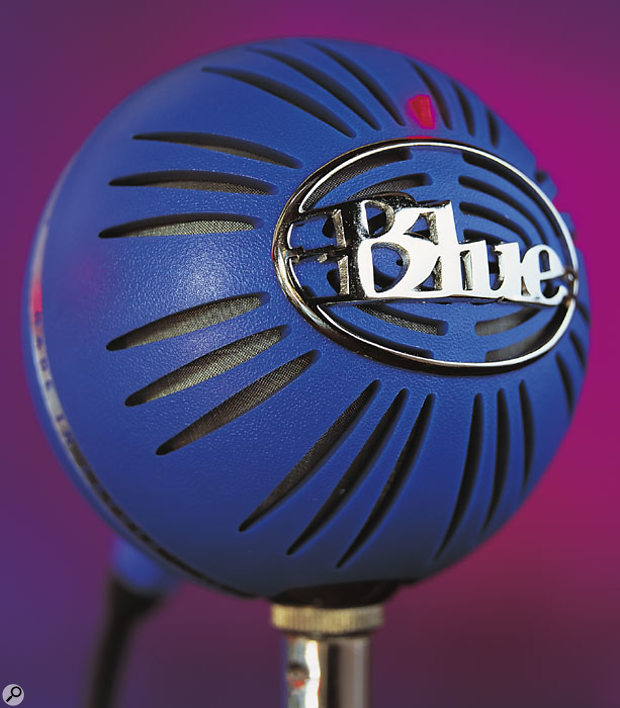 A phantom-powered dynamic microphone?! What's all that about then? You'd be forgiven for thinking that you're reading an old April SOS by mistake, but the description of the new BLUE Ball is, in fact, accurate. The performance of dynamic microphones, whether ribbon or moving coil, is dependent to some degree on the load they have to drive — the impedance presented by the combination of connecting cable and preamp input. Inherently, the value of this load varies with frequency which, in turn, affects the amount of current the microphone can deliver at different frequencies and so also affects the frequency response. This is one reason for the growing interest in preamplifiers with adjustable input impedance, since changing the input impedance can have a pronounced affect on the tonality of a dynamic microphone.

It is for this reason that the BLUE Ball uses phantom power, because it incorporates a solid-state discrete Class-A buffer amplifier designed to present the microphone capsule with a constant-impedance load, while driving the cable from a constant 50Ω source. The result is a dynamic microphone able to provide a far more consistent tonal character regardless of the length of mic cable or preamplifier input impedance.

Of course, being a BLUE design, the styling of the Ball microphone is far from conventional. It is — not surprisingly, given its name — spherical in shape, and fashioned from a blue anti-resonant ABS plastic shell measuring roughly 95mm in diameter. The BLUE logo and a red phantom power LED signify the front of the capsule, and a series of radial slots enable sound to enter through a fine wire-mesh grille. A standard three-pin male XLR at the rear of the shell provides the output termination, and a 5/8-inch standmounting socket is built into the base of the sphere (a European 3/8-inch adaptor was not supplied with the review model). This coupling is mounted in a single-axis ball socket so that, when fixed on a mic stand, the microphone position and angle can be adjusted over about ±45 degrees. 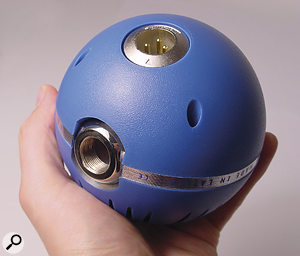 The mic's XLR output socket is at the rear, and there's also a built-in standmounting socket which allows the mic angle to be adjusted once fixed to the stand.Photo: Mark EwingI did consider disassembling the microphone in the interests of scientific research, but an identification label is glued around the centre of the sphere where the front and back halves join, and I didn't want to damage the review model in taking this off. The handbook for the mic is written with tongue very firmly in cheek, and includes endorsements from such audio luminaries as Socrates, Beethoven, and Da Vinci! Although an amusing read, there is relatively little useful technical information about the mics other than the bare specifications, from which we learn that the Ball has a cardioid polar pattern and a frequency response which extends between 35Hz and 16kHz (no limits are given). Its sensitivity is relatively high at 3.5mV/Pa and the maximum SPL is either an ear-splitting 162dB or 146dB depending on whether you believe the handbook or the company's web site, respectively (both figures are for one percent distortion). Likewise, the equivalent output noise is either 17dBA or 18dBA, depending on which source of information you use. The mic draws 2.5mA of current from a standard 48V phantom supply, and its optimum inflation pressure is specified as 28psi — no, not really!

These specs suggest that the internal preamp/buffer provides some gain, since the output level is four or five decibels higher than most high-output dynamic microphones, but the preamp circuitry doesn't seem to have affected the noise floor. Although 17dBA sounds high by capacitor mic standards, a figure of 20dBA is quite common in dynamic microphones, so the Ball is no noisier than many and the higher output level will help to offset the self noise by allowing a reduced preamp gain. The frequency bandwidth is also very typical of a dynamic capsule — the relatively high mass of the voice coil glued to the back of the diaphragm inherently curtails the HF response somewhat. So, a good all-round technical performance then.

The Ball is claimed to be suitable for use in any roll — I mean role! — where dynamic mics would normally be chosen, and in both the studio or in live sound applications. The microphone's relatively large size enhances its front-to-back separation, particularly at high frequencies, and its distinctive and slightly retro styling is enough to turn the heads of most vocalists. 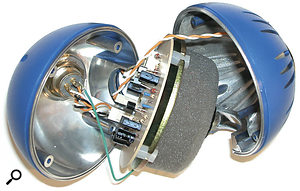 The internal construction of the BLUE Ball — the sensitive side of the moving-coil capsule can be seen just protruding past the layer of foam.Photo: Mark EwingThe handbook lists just about every common musical instrument as a suitable target for the Ball, starting with vocals and including electric and acoustic guitars, strings, upright and electric basses, organs, harmonicas (although the Ball is probably a little too large to hold comfortably in the hand while playing), drums (including kick drum), saxes, flutes, and other reed instruments. Strangely, the brass section has been left out of the recommendations list — while the mic's high-end roll-off will tend to dull the attack and bite of brass instruments, at least the high SPL is not a concern. I find the mention of drums interesting, since the microphone's size would make placement over snares and toms a little more difficult than usual.

I tried the Ball out with various vocals, acoustic guitar, clarinet, and the Leslie cabinet of my Hammond, all with a surprisingly good performance. I found the rear rejection to be exceptionally good, and the mic exhibited a very narrow frontal pickup area with reasonably smooth off-axis attenuation. However, the Ball does seem particularly susceptible to handling noise and vibrations through the mic stand, and I ended up placing the stand legs on dense foam blocks to try to reduce the transmission of mechanical noise from the floor through to the mic.

The overall impression of the BLUE Ball is much as you would expect from any competent general-purpose dynamic microphone. It has a slightly closed-in, but full sound when compared with a similarly priced condenser mic, but holds its own very well when compared with popular dynamic mics such as the Beyerdynamic M201 and Sennheiser's MD421 II, for example. The Ball has a useful mid-range punch which helps sounds to cut through in a mix, but it also compresses transient dynamics — as all dynamic mics tend to. This can be used to great effect when miking drums and percussion, and even acoustic guitars to some extent, but can also make the sound a little dull and lacking in detail. The frequency response sounds relatively smooth, without obvious narrow-band peaks or dips, although there does seem to be a broad presence boost which helps a little with clarity and diction on voices.

Music Of The Sphere

The Ball is an intriguing microphone. It's highly unusual shape makes it instantly distinctive and recognisable, and that alone will give it great appeal. However, this mic is also a competent performer, with a well-controlled polar pattern and a huge dynamic range. It also appears to be very rugged and well built, although I remain a little concerned about its susceptibility to mechanical vibration through the mic stand.

The ridiculously low cost of Chinese condenser mics in the UK means that the BLUE Ball will have to fight hard for its share of the studio market, but the badge on the front will help considerably, as BLUE have been acquiring quite a reputation for their unusual and impressive condenser mics. Think of the Ball as the Latvian equivalent to the Sennheiser MD421 — a good all-round performer!

BLUE obviously care a great deal about microphones, so it's hardly a surprise that they eye run-of-the-mill mic cables with suspicion. Its all well and good having a high-resolution microphone, but hook it up to the console or mic preamp with a poor-quality mic cable and all that sonic detail can be quickly lost. So, in an effort to help owners of high-quality mics — and not just those made by BLUE — the company also markets a small range of high-spec XLR mic cables. 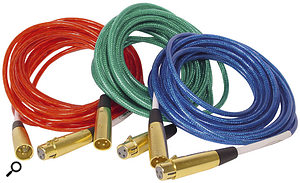 Photo: Mark EwingNeedless to say, these cables are within BLUE's tradition of striking styling, with glittering braided shielding visible through coloured translucent cable sheathing. One aspect that BLUE seem keen to promote is that the these microphone cables are constructed from a propriety blend of virgin materials. Three balanced mic cables are available, each constructed to BLUE's exacting standards: the twisted-pair Cranberry and Blueberry cables, the star-quad Kiwi cable, and a specialised Champagne multicore cable for use with valve mics.

The Blueberry is rated as a 22awg cable (this referring to the diameter of one of the inner cores) with each signal core constructed from 60 strands of 40awg wire. The two cores are twisted together to help reject electromagnetic interference in the usual way, while also exhibiting low capacitance to help deliver an extended frequency response. The tinned-copper braided shield, visible through the translucent outer sheath, provides 95 percent screening coverage, and the complete cable has been designed to provide good handling characteristics, even in low temperatures. Gold-plated XLRs terminate the cable.

The Cranberry is slightly chunkier, and rated as a 20awg cable. The two inner cores are each constructed from 40 strands of 32awg wire, and twisted in the same way as the Blueberry cable, with a similar 95 percent braided shield. BLUE suggests that the more substantial construction of this cable makes it better suited to radio, TV, and sound reinforcement applications, but it remains a very flexible cable, fitted with gold-plated XLRs.

The Kiwi cable is a star-quad design, using a quartet of 22awg inner cores, connected in opposite pairs to effect a much better level of electromagnetic interference rejection — especially from nearby sources. The overall screen is the familiar 95 percent coverage tinned-copper braid, and gold plated XLRs are once again used to terminate the cable.

Although not appropriate for the BLUE Ball mic, or any of BLUE's solid-state condenser mics, the Champagne cable is a multicore design intended to provide a high-quality link between a valve microphone and its power supply. The audio signal is carried by a twisted pair of 22awg cores (comprising 60 strands of 40awg wire) with a tinned-copper braided screen. The various anode, heater and other control voltages are carried by five more 24awg conductors.