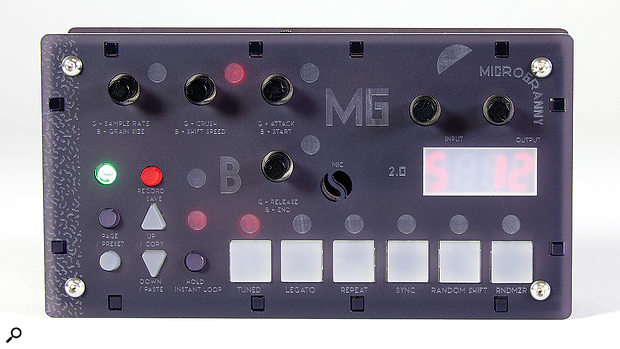 The MicroGranny 2 is a miniature granular sampler, and you won’t have to sell any of your elderly relations to get one.

Bastl Instruments are perhaps best known for their distinctive wood-faced Eurorack modules, but today on the desk is a stand-alone, equally small-scale device — and no trees were harmed in its construction. The MicroGranny 2 is a monophonic 8-bit sampler based around the Arduino microprocessor. It uses a Micro-SD card for its storage, which means that although you can play just one note and one sample at once, you aren’t limited by RAM capacity like regular samplers.

It employs granular processing to carve up audio in ways that classic hardware machines couldn’t accomplish, and since it’s also pocket-sized, battery-powered and has a built-in microphone, you might already be wondering if there’s any reason not to carry one everywhere.

Everyone Loves Their Gran

Externally the MicroGranny 2 is a plastic box 142 x 76 mm, with 12 buttons, six knobs, a four-character display and precisely enough LEDs. The MicroGranny 2 is eager to receive MIDI input, and its audio I/O is via 3.5mm jacks. Plug a lead into the line input and it disables the on-board microphone. A 9V battery is supplied but there’s an optional adaptor too.

When I opened up the MicroGranny 2, I noticed the battery wasn’t secure inside the box. Fortunately, once the screws are in place the battery is clamped pretty tightly and (other than to replace it) you shouldn’t need to go inside too often — except possibly to rescue the Micro-SD card. I had to do this when, due to my clumsiness, the card fell inside; I’d therefore recommend tweezers or fine pliers for the insertion, making sure not to let go until it’s seated properly.

The 4GB card supplied is plenty big enough for tons of 8-bit 22kHz audio, the MG2’s desired format (16-bit is fine too). Once stocked with all your favourite samples, only the lack of a speaker prevents you from startling actual grannies with them on the bus.

I’d love to report that the panel is clearly-labelled, but it isn’t. Actually, it was only when working in bright sunshine (trying to sample a pair of battling magpies) that I noticed it was labelled at all. Fortunately there aren’t too many controls to remember. The two knobs positioned above the display handle the sampling input level and the master output respectively. All the rest have either a green or blue personality, indicated via an LED. In green mode, the knobs control sample rate, bit-crushing, plus the attack and release stages of a simple amplitude envelope. When blue they control grain size and grain shift speed, plus sample start and end.

This sharing of controls could easily have felt like a major compromise, except that Bastl Instruments decided to place the knobs in permanent ‘pass-thru’ mode. They therefore only wake up when the current value is passed, at which point an LED lights to tell you. As solutions go, this seems superior to fitting encoders because knobs are generally more satisfying.

Ordinarily, the six square buttons trigger samples but, in combination with others, they load presets or set the attributes of each sample within a preset. In only a short time, aided by the display and plentiful LEDs, I doubt anyone will need the manual or panel labels.

The 60 available presets are organised into 10 banks, with each containing six sounds and related parameters. The loading and saving of presets is pretty painless and, despite samples being limited to two character names, in practice you’re only held up by occasional delays in the file system.

Any samples recorded on the MG2 are prefixed with a number, which relates to the current preset and button. Samples you’ve prepared offline and copied to the card should be named alphanumerically — without punctuation or symbols. Providing you ensure the first character of all samples is alphabetic, none will be overwritten by the sampling process. All samples reside in the card’s root directory along with presets, which are saved as text files.

The system works well enough and a goodly bunch of examples are provided to begin your exploration. These include speech, orchestral snippets, solo piano, synths and percussion. Due to the powers of granular processing, they’re all fairly useful but even so, out of habit, I copied about 50 of my own samples to the card, after first batch-processing them in Wavelab to the required 22,050Hz, 8-bit format. Free WAV editors such as Audacity will serve just as well.

In my tests there was no audible difference between the playback of 8-bit and 16-bit files, but as you’d expect, speech and percussion samples fared considerably better than synths or orchestral excerpts when rendered at 22kHz. All the MG2’s samples — long or short — are internally divided into 1024 points and while you have no control over their positioning, these become relevant when using the start and end knobs.

I found sampling — using either the line input or microphone — to be refreshingly easy. Having set a suitable level, the incoming signal can be monitored using the Hold button. Having specified one of the six locations to hold the sample, you press the red button and begin making noises, constrained only by the card’s free space and the 2GB limit imposed by the file system. During sampling, the display goes off to minimise noise and the recording process has the bonus effect of saving the current preset automatically.

Triggering your new sample is no more complex than pressing a button, but you should be aware there’s no way to change the gain of individual samples post-recording, unless you count the application of the crude and crunchy Crush effect, which of course makes it both loud and distorted.

The MicroGranny’s rear panel (not a phrase I thought I’d ever write!) includes 3.5mm audio I/O sockets, MIDI In, a Micro-SD card slot and an input for the optional 9V power supply.

With a potentially massive collection of samples at your disposal, what can you do beyond simply triggering each in turn? The answer is a pleasing amount from such a minimal interface, thanks to combinations of the Function button and other keys.

By setting the Tuning parameter to on, you instruct the sample-rate knob to work in semitones, over a range of -36 to +5. Those low transpositions are exactly what’s required to uncover the demonic aliasing in any sample. If you prefer, you can play the most recently selected sample chromatically via MIDI over a range of 3.5 octaves. Turn the Tuning parameter off and the knob operates in fine-tune mode, at 10x the resolution. In a killer offshoot of this, the sample now spans five octaves, with each MIDI key representing a different start position. It gets even more interesting when you activate granular processing, your keyboard becoming an instant means of accessing individual grains.

If you enable ‘legato’, the MG2 will not restart sample playback when incoming notes overlap. However, it didn’t seem to behave naturally, which I later realised was due to a bug in the velocity handling. Weirdly, the velocity of any sound is determined by that of the previously received note. I’m informed this was introduced in the most recent revision, the fix scheduled ‘asap’.

The Repeat parameter is important because it governs whether the sample restarts when it reaches the end, ie. whether or not it’s ‘one shot’. For samples you wish to leave running, there’s a useful Hold key, and should you fancy making a loop from only a portion of a sample, the ‘instant loop’ function will do just that.

Progressing through the available parameters, Sync is next and it’s an invaluable addition. It activates the response to MIDI Clock, turning the granular process into a rhythmic playground in which the grain loop and sample end values are quantised to meaningful MIDI intervals. Sync can deliver anything from ultra-fast note repeats to looping patterns. Since there’s full MIDI control of every knob, you can create complex grooves if you possess any sequencer capable of sending MIDI CCs.

The grain loop is a short section of audio that travels through the sample — forwards or backwards — and granular playback is invoked whenever you set the loop’s size to a value above zero, at which point the MG2 becomes a whole different animal, or elderly relative. You can play the grain loop in isolation by setting the grain shift speed to zero, but it’s when you set the shifting in motion that the fun really starts. Stuttering speech, glitching percussion, chopped-up musical phrases are all yours to command, and there’s even a random shift option that switches direction constantly, generating ever-changing textures.

It’s tiny, it’s charming, it’s totally disarming — it’s the MicroGranny 2! Maybe, like me, you’ve never anticipated the pleasures of a portable 8-bit sampler, but a brief exposure to Bastl Instruments’ mini-marvel should sort that out. Yes, it’s monophonic and yes, it’s as dirty as a bag of gravel, but taken as a source of unique loops, drones, hits, sound effects and garbled voices, it’s completely addictive. Furthermore, it scores by having MIDI control, a built-in microphone, card storage for long samples and — above all — that tweakable granular processor.

At the price it’s unfair to quibble much, but given the choice I’d have ditched the crusher in favour of an alias-taming low-pass filter, or a gain control to even out the levels within each preset. However, since the MicroGranny 2 is Arduino-based and the source code is available, who knows what might be possible? Regardless of any minor misgivings, it ticked enough boxes for me and I was resolved to purchase the review model — until I cruised the Bastl Instruments web site and spotted an alternative look, in psychedelic glowing green!

It’s a portable, monophonic granular sampler with a flair for freaky, glitchy, twisted tones and impressively long samples if needed.