Behringer's cost-effective take on amp and cabinet modelling, plus effects, is now available for bass players 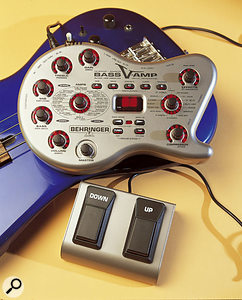 The premise behind modelling preamps such as the Bass V-Amp under review here is that what we're most often looking for when treating a guitar or bass is to ape a generic sound — either that of a player or of a combination of effect, amplifier and speaker cabinet. So, firstly, in modelling-type products, internal algorithms are programmed to imprint on the incoming signal the characteristic frequency balance, distortion products and dynamic envelope of a selectable range of classic backline amplifiers and cabinets. Secondly, the modelling stage is followed by an effects engine that can generate all the usual effect types, plus, in the V-Amp range, a few less common ones — Synth, P-funk'n and VCF+flange, for example, in the case of the Bass V-Amp. Of course, amp and cabinet modelling is never an exact science, especially when the modelled sound is augmented with that of a real amp and cabinet further down the line. However, the success of modelling hardware and, for that matter, software plug-ins, in the last five years or so suggests that the approach has something to offer.

Before I go on to flesh out the Bass V-Amp's take on modelling effects, I have an early gripe: the owner's manual is awful. In order to make the best use of the review period, I thought I'd better read the manual to get up to speed as quickly as possible. However, not only did it not make a great deal of sense, perhaps as a result of translation from the original German, but it also seems to have been written with little regard for structure and the needs of a new user. There's no 'Getting Started' section, no self-contained explanation of the basics, no block diagram of the signal path, and a confusion all the way through that comes from the manual's attempt to cover the Bass V-Amp Pro at the same time. The manual is so hard to use that it really did colour my early opinion of the product. Even now I still don't feel I fully understand the entire thing, but life's simply too short to make sense of a manual as difficult to read as this. 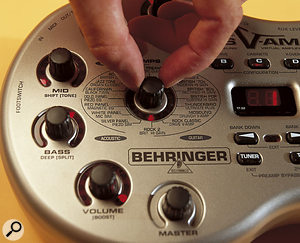 In spite of the shortcomings of the manual, what I have gleaned is this. The Bass V-Amp offers 32 amp models, 23 speaker cabinet simulations,16 down-stream effects, and a compressor to level things off before the output. In standard setup, each amp model is tied to its respective speaker — the idea being that you're after the classic sounds and therefore won't probably be that interested in, say, an Ampeg B15 driving a Trace Elliot 4x10. You can swap amps and speakers around, but I'm not sure you'd necessarily find the exercise all that valuable. There's also a tuner (one that, praise be, makes a good stab at locking on to the low 'B' on a five-string bass) and independent access to the signal drive, tone, boost and split functions that, within the amp modelling algorithms provide overdrive characters.

Overdrive with bass? Well, no, it's not the most oft-used bass effect, but despite being christened the Bass V-Amp, this product is actually designed for keyboards and guitars also. This seems a strange decision to me, and may well disappoint bass players who buy it and find that a third of its effects aren't really designed for their instrument — although some of the 'wrong' effects work quite well on bass. It's even stranger given that Behringer already have the original guitar-oriented V-Amp products. Maybe the market for a bass-only product simply isn't big enough?

Nice touches (just to prove I didn't get entirely out of the wrong side of the bed!) are the heavy-duty footswitch for selecting preset locations, a good-quality flying-lead mains adaptor, and a smart, if slightly camp looking, zip bag for carrying everything around.

The Bass V-Amp has a generous 125 memory locations for storing patches. As supplied, however, all the locations contain factory presets, so storing one of your own patches necessitates overwriting a factory one. It is possible to recover the factory presets, but only globally, so you'd therefore lose any user patches — Joseph Heller could have used that in Catch 22. The only workaround for the problem is via MIDI (the V-Amp is fully MIDI controllable and has a full set of MIDI In, Out and Thru sockets) and Behringer's PC-only freeware V-Amp editor software — shame there's no Mac version, considering the high proportion of Macs in music production.

The final few features are an auxiliary stereo input jack and level control that Behringer say are intended to enable the unit to be used for playing along to CDs (in which case surely a pair of phono sockets would have made more sense), a headphone socket, and a setup page that enables the two output sockets to be configured in various modes to carry signals appropriate for live or studio applications. For example, mode L2 makes one output socket carry the signal imprinted with both the amp and speaker modelling while the other socket carries the signal imprinted with only the amp modelling. Mode S2, on the other hand, has one socket carrying the fully treated signal and one a buffered dry signal.

So how does it sound? Well, as with any effect, appeal is in the ear of the beholder, and while this particular beholder did wince at quite a few of the factory presets, many of which seemed well overcooked, the basic quality of the sounds the Bass V-amp can produce, and their variety, is impressive. I especially liked the way subtle down-stream effects worked with alternative amp and speaker models. A mild chorus and reverb on, say, the British '80s (for which read Trace Elliot) simulation produced the classic '80s fretless bass sound, while the same effect settings on say the Jazz Tone (a Polytone 101 bass combo model) resulted in a similar sound, but with a usefully different, and less clichéd, character. While the amp simulations are, like the preset effects, probably a little overdone, they do provide a foundation for a huge variety of sounds, and enable more subtle use of the multi-effects than would perhaps otherwise be the case.

On their own, too, without any effects, the amp and speaker simulations are fascinating and worthwhile. I remember in my youth occasionally hiring an old Fender Bassman 100 valve amp and a 1x15 cabinet. I loved the sound it made — wonderfully warm, yet with punch and clarity — and I never really achieved the same with any other backline.

Well, what do you know? After half an hour's tweaking of the Bass V-Amp's parameters, while I'm sure I didn't recreate the sound perfectly, I found one — the Ampeg B15 combo with a little extra mid-range and top — that really did seem to have something of the same character that I remember. Finding that sound, for me, makes the V-Amp worthwhile on its own, and says much about its versatility, so I'm sure I'll find a few other satisfying sounds too. I have a gig this evening, and I suspect I'll have this new toy staring up at me from the stage!

Don't expect to understand the Bass V-Amp from the moment you turn it on, or even after you've tried to read the manual. But persevere and you will find some inspiring bass guitar treatments.