Despite being small enough to fit in your pocket, this no-frills five-channel mixer provides all the most important features required for those building their first home studio around a computer. 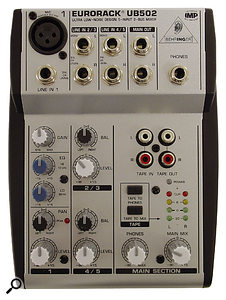 I have to say right at the start that this is the first mixer I've reviewed that is significantly lighter than its own external power supply! In fact some people might even feel it doesn't have enough features to even count as a mixer at all, but a closer inspection reveals that it has a number of studio applications.

The UB502 has five inputs: a single mic channel with two stereo line inputs. Unfortunately the mic input has no phantom power option, so anyone wanting to use a capacitor mic (other than a tube model with its own PSU) will either have to use an external phantom power supply unit or else choose a back-electret mic which can be battery powered.

The mic channel, which is based on the latest Behringer Invisible Mic Amp circuitry also has a line input jack followed by a Gain control, high and low EQ (12kHz and 90Hz), a Pan control and a Level pot with Peak indicator LED. There are no aux sends, returns or insert points on this mixer, and the two stereo inputs (balanced or unbalanced jacks) have only Balance controls and Level knobs.

In the master section, there are level controls for a headphone output and for the main output, as well as phono connections for patching in a stereo recorder. The output from the stereo recorder may be routed to the phones output in place of the main stereo mix by means of a Tape To Phones button. There's also a further Tape To Mix button allowing external signals coming in via the two-track input to be added to the main mix. There's no control room output as such, but the phones output should be fine to drive most power amps or active speakers.

While the UB502 has some obvious mixing applications, such as combining audio with backing tracks, I feel that it would work well in the studio simply as a stand-alone mic preamp or line input device. Furthermore, it makes the ideal companion for a simple computer-based audio system, as any mix of the input channels can be recorded via the soundcard's stereo input, and at the same time the soundcard's output can be monitored using the two-track input, as long as you set the Tape To Phones button appropriately.

The mic preamp is as good as or better than you find in many larger consoles, and is limited only by the lack of phantom power. In fact the smallness of the console works in its favour in many respects, as the signal path is kept short with no unnecessary frills. As a straight mixer, you can also route the tape input into the mix, providing a total of three stereo line channels plus a mic channel.

Whether you're setting up a basic computer recording system or just looking for a miniature routing/mixing problem-solver, the UB502 is a great little performer at an extremely attractive UK price.

The UB502 may look like a toy, but it is a very cost-effective problem solver that delivers good sound quality.