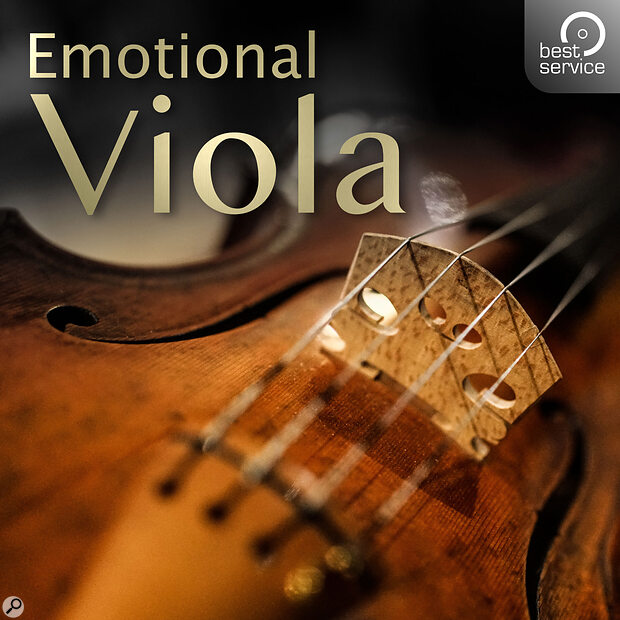 Best Service and Harmonic Subtones have finally delivered on the missing member of their Emotional family, the Viola. Despite its somewhat generic‑sounding name, the new Emotional Viola features a rich close‑miked viola with the same depth of colour, wealth of articulations, and seamless ornamental transitions which featured in the previous Emotional Violin and Emotional Cello releases. For those who have not yet discovered these powerful solo instruments, the Viola would not be a bad place to start.

There do indeed seem to be enough understated and frankly wimpy viola players out there to earn some of the jokes directed at the instrument. Yet when one works with a true artist capable of plumbing the full depth of the viola, it is a revelatory experience similar to working with a master alto singer. Thankfully the engineers had an artist of just such a calibre to work with in capturing the subtleties, nuances and potential power of the alto voice of the string family.

A major strength of the Emotional series, the Ornament‑MKS option available on the Master Patch and many of the individual patches is accessed by keyswitches to the right of the playable range. These are held modifications of whatever existing technique you may be using at the time. For instance, you can be playing in pizzicato and then do a traditional keyswitch over to legato, but then hold an MKS keyswitch to have the pitch fall, or fade out or transition slowly to a tremolo.

...the Emotional Viola is a quick learn and playable right out of the box. The depth and richness of this instrument more than justifies its price tag.

I began with the immense Master Patch, which had a beautiful legato in both slow and rapid passages, while both the traditional keyswitches and the performance/MKS keyswitch triggers layered seamlessly into various performances. Aside from strong playability, Emotional Viola’s multiple options for timbre, EQ, reverb and bowing are the strengths which can lead to convincing realism. In seeking a more throaty and muscular approach to the instrument, for instance, I was able to layer in a more aggressive attack on to non‑legato notes and an edgier setting in the ‘timbre’ option. Ethereal sustains were likewise created with the sordino (mute) switch, ‘silk’ timbre, and Big Church reverb setting.

Picking the Flautando NV patch from the Sustains folder, and playing a polyphonic solo line, I was impressed to hear the velvety tone of the instrument, while the rebowing adjusted to play in time with multiple‑stops as a real player would: this level of accuracy carried over to the other patches without fail.

Despite numerous options, the Emotional Viola is a quick learn and playable right out of the box. The depth and richness of this instrument more than justifies its price tag, while special deals are currently available for existing Emotional users.