Rock drum collections are plentiful, but as soon as something slightly out of the ordinary is required, such as a comprehensive selection of brush samples, the options die off rapidly. The first Brush Artistry collection plugged a hole in the market, and the second builds on its success, being produced by the same team, comprising composer Kent Carter and drummer Patrick Campbell. 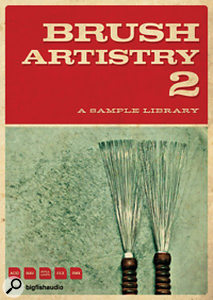 Campbell claims that he found other brush samples to be bright, tinny and thin, so he based his on warm-sounding jazz albums of the '50s and used vintage kits.

Supported formats include Acid WAV, Apple Loops, REX and RMX, with the WAVs alone amounting to nearly 3GB. The samples, which are categorised as fills, intros, endings, loops and snares, form as many as 68 construction kits. As is the way with construction kits, everything therein shares the same rhythm and bpm speed (there are 20 tempo variations), so that it can be combined in various ways to form coherent compositions.

The number of samples in each kit is about 18, on average, which is enough to make a composition without it sounding too repetitive, particularly if a little DAW editing is brought into play here and there.

Construction kits make song building fast and simple, but also tend to force composers to work in blocks, so for those willing to get their hands dirty and build their own patterns in a sequencer, Brush Artistry 2 includes two complete drum kits. Also aiding composition are snare-only loops, of which there are typically two per kit. These are particularly useful in genre crossover compositions, breakdown sections and situations where other drum-kit elements get in the way.

The kit styles include traditional jazz, swing, ballad, waltz, samba, bossa nova and 'world', but it is worth adding that many loops would lend themselves to documentary work, where something quirky, but not overly intrusive, is required. It isn't hard to imagine, for example, some of these loops scoring a scurrying creature sequence in a wildlife programme. This is particularly true of the World and Soundtrack kits, which generally provide classification-resistant loops.

The kits entitled 'Train' are evocative of early Johnny Cash records, whereas some of the slower-tempo ones would suit Roberta Flack-style compositions. There are also 15 Backbeat and six Groove kits that serve contemporary pop and rock styles, especially those with a slight country feel.

The producers have not been tempted to clean away hisses and other minor extraneous noises, and the sound of the drum room is evident throughout. The result is a collection of warm, natural-sounding samples that meet the brief and have the feel of vintage recordings.

One criticism is that BA 2 doesn't offer a range of tones — but the production is very consistent, so it's good that the default sound is appealing. It will still take a masterful programmer to build full compositions with all the nuances of a genuine performance, but at least the building blocks sound right to begin with.

In conclusion, I think it would be fair to say that Brush Artistry 2 is an essential accessory for many professional composers. Tom Flint